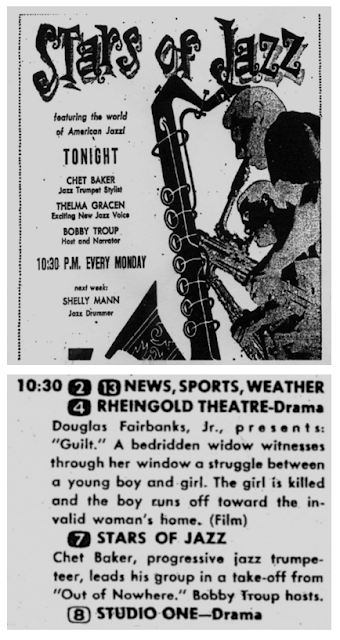 The display ad in the Los Angeles Times announcing the appearance of the Chet Baker Quintet on Stars of Jazz most likely reached a wider audience than the brief notice in TV Guide.  Once again TV Guide failed to note that a vocalist was appearing on the show, and the description was in error as the variations of OUT OF NOWHERE would be performed by Thelma Gracen, not the Chet Baker Quintet.  Thelma Gracen was the second songbird to appear on Stars of Jazz and had recorded an album for EmArcy Records in December of 1955.  Two of the songs she performed on that album were featured on the show, OUT OF NOWHERE and NIGHT AND DAY, backed by Bobby Hammack.

Chet's quintet opened with DIG, followed by one of Chet's vocal numbers, THE THRILL IS GONE.  The group closed out the show with a performance of TO MICKEY'S MEMORY. 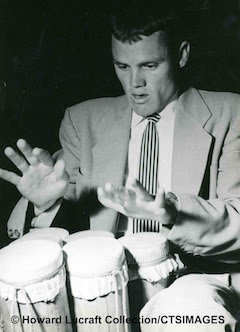 Jazz City was located at 5510 Hollywood Boulevard at Western Avenue.  The list of jazz artists who appeared at Jazz City in the mid fifties was a veritable WHO’S WHO of the leading jazz musicians performing and touring at that time.  The Chet Baker Quintet was actually a sextet if you included Bill Loughborough on boobams, an instrument that he and David Buck Wheat invented.  The balance of the quintet included Phil Urso on tenor saxophone, Bobby Timmons on piano, Jimmy Bond on bass and Peter Littman on drums. The photo of Chet playing the boobams was taken at Jazz City by Howard Lucraft.  Howard hosted the Jazz International meetings at Jazz City each week and was usually on hand other nights with his camera. 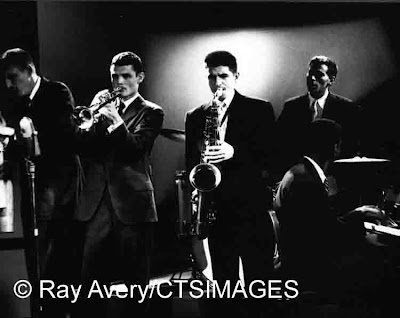 Stars of Jazz became a magnet for photographers who engaged in jazz photography.  Norman Abbott’s suggestion that the stage set be in dark tones and shadows hi-lighted by Vince Cilurzo’s lighting effects provided an ideal backdrop for still photography.  Ray Avery had missed the first two shows with Stan Getz / Kid Ory and Erroll Garner / Faith Winthrop, but was in attendance at virtually every show that followed.  The producers welcomed photographers as long as they obeyed some basic ground rules when the show was in live broadcast.

Bobby Troup and Thelma Gracen on Stars of Jazz 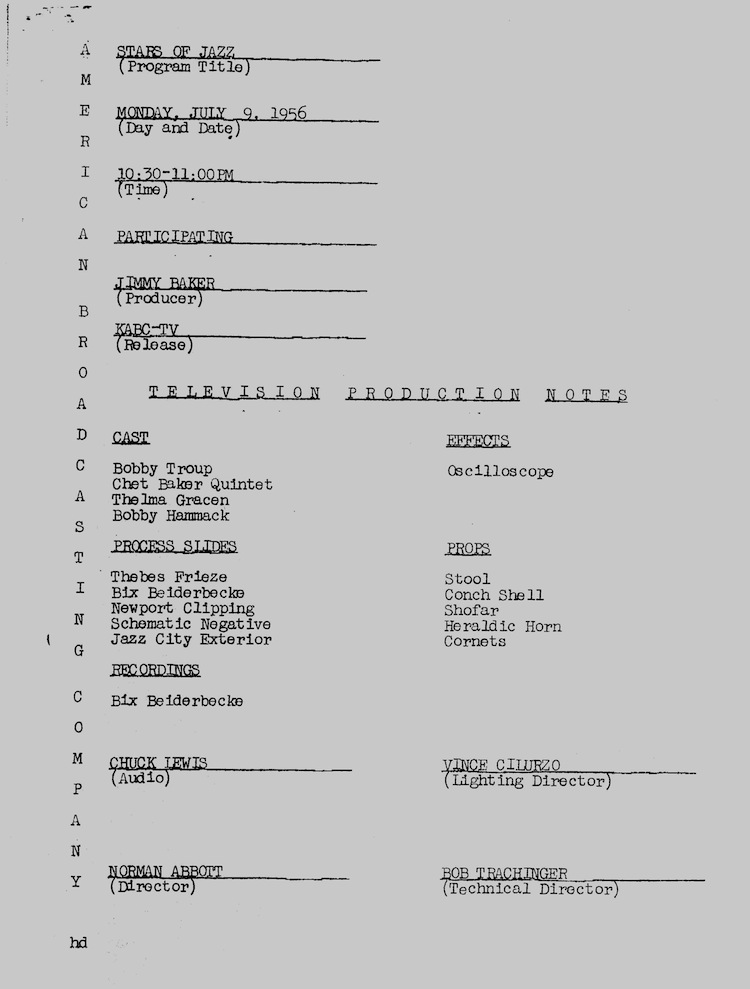 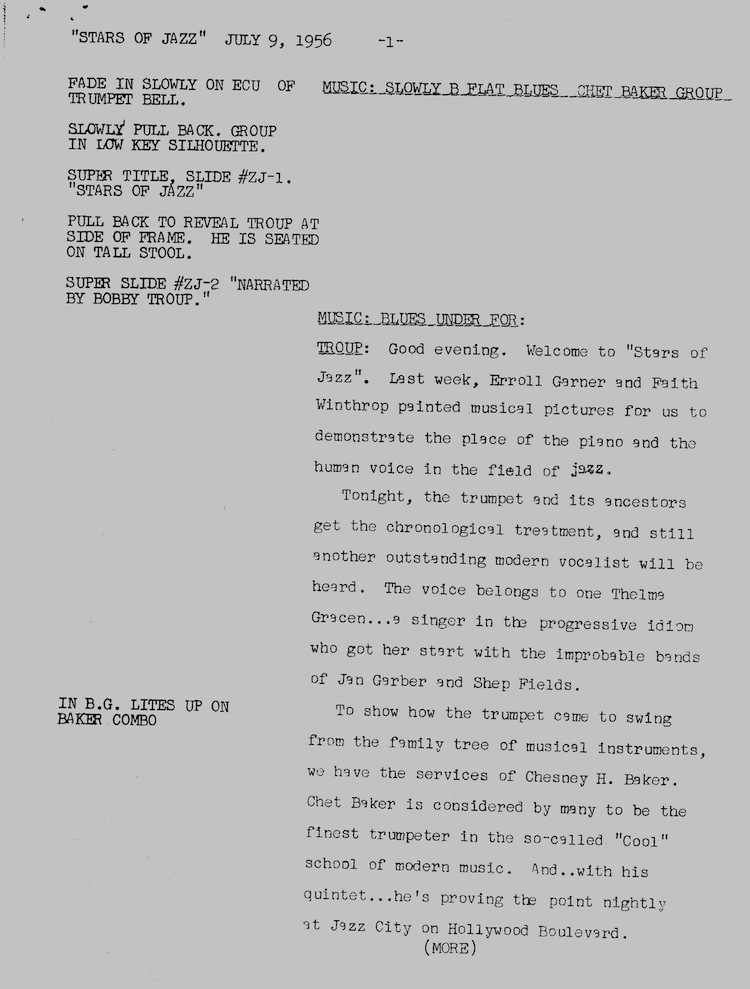 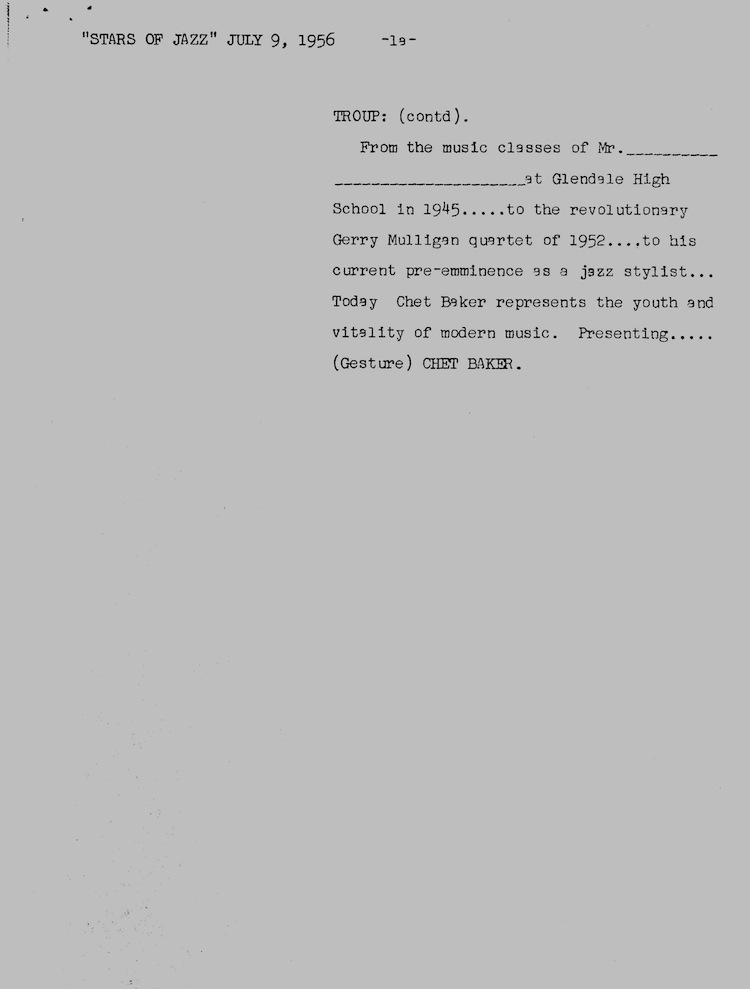 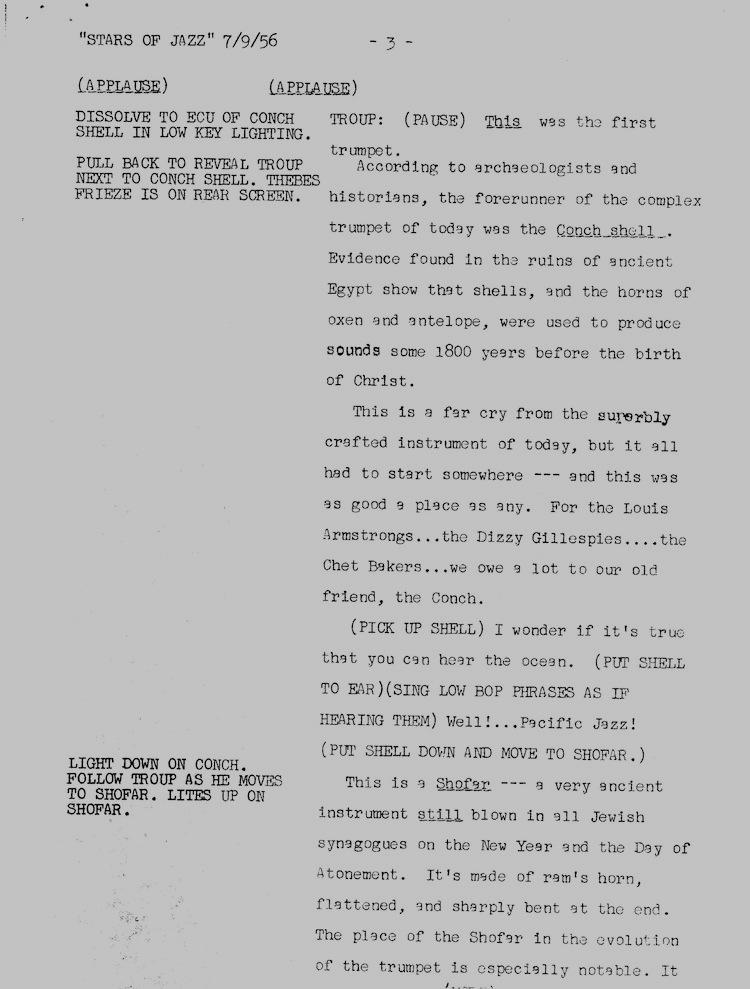 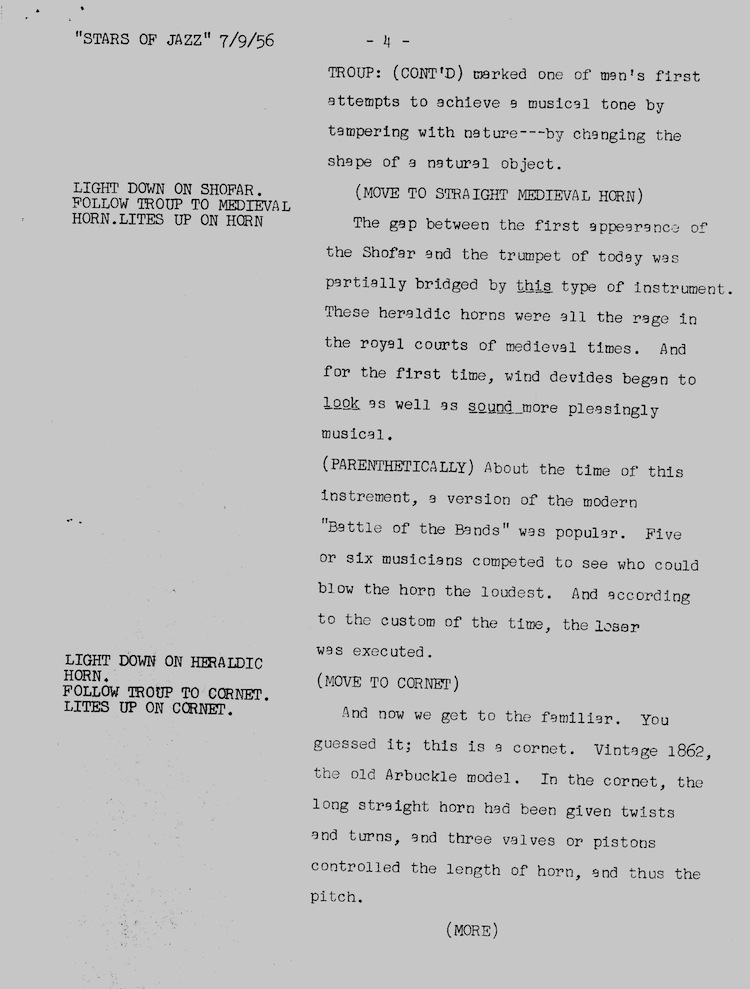 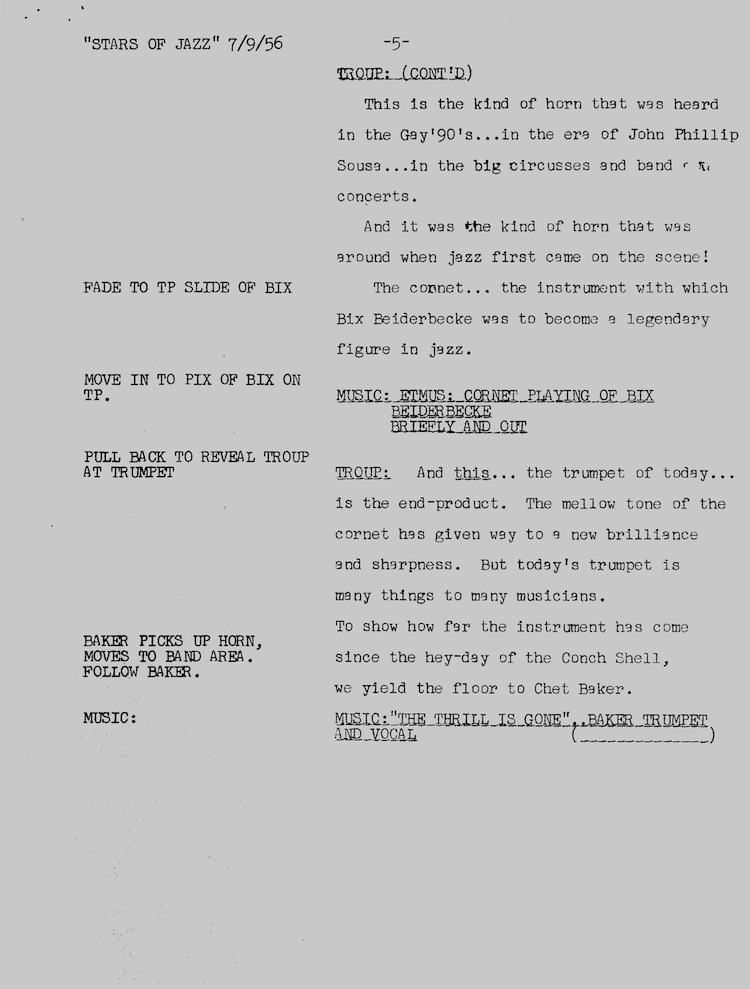 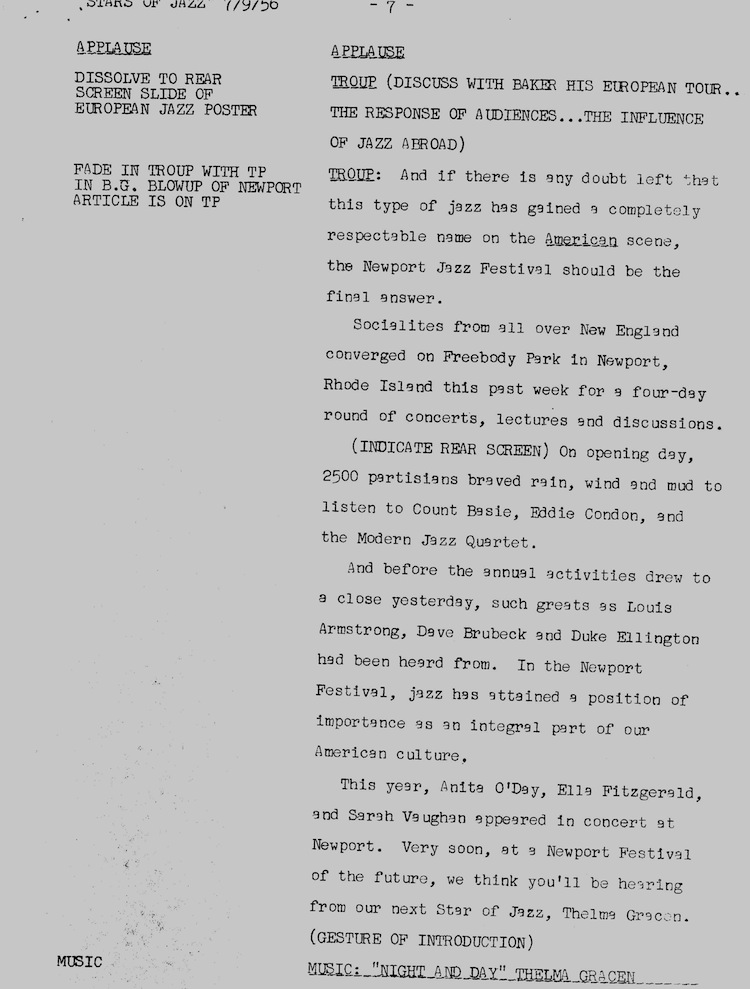 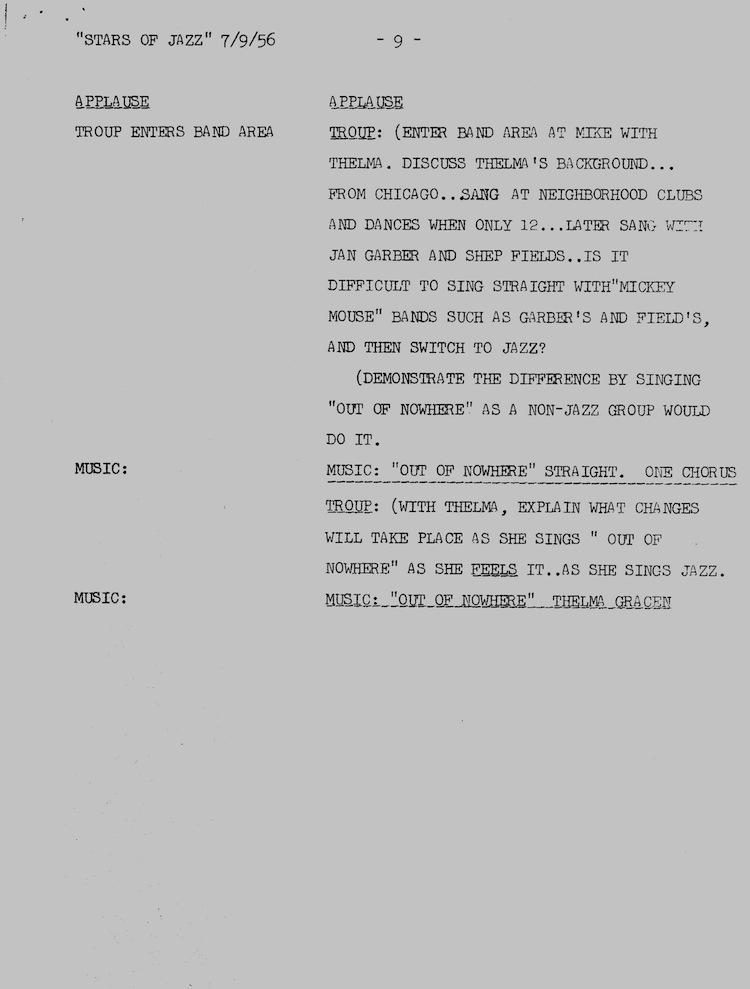 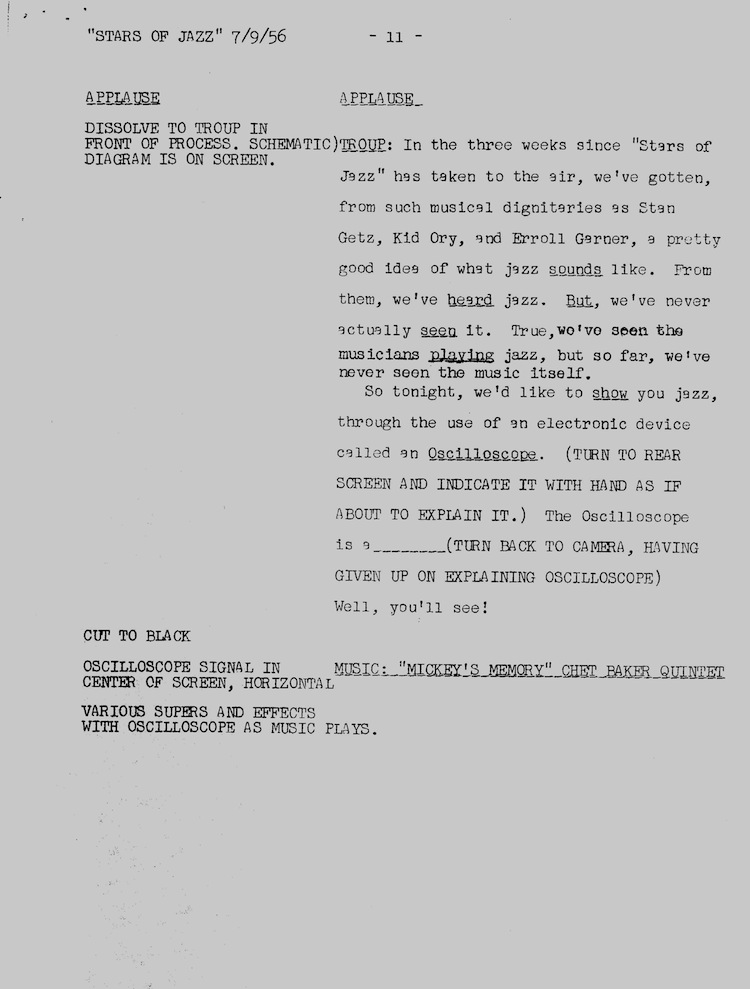 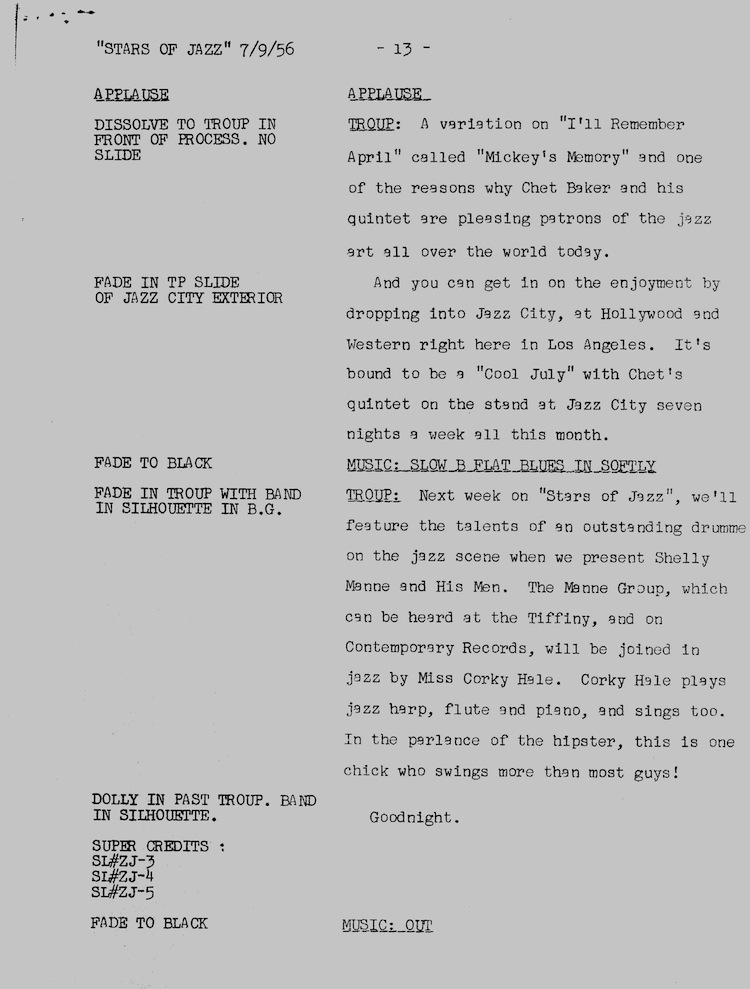