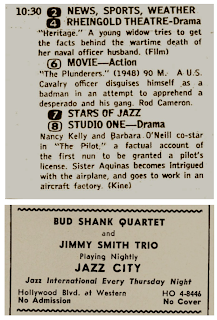 The TV Guide listing for the November 26, 1956 edition of Stars of Jazz noted the time, 10:30 PM, but lacked any details regarding the artists that would be appearing on the program. This omission was not a set back to regular viewers who knew from Bobby Troup’s announcement at the close of the November 19th program that the Bud Shank Quartet would be the guest jazz artists on the 26th plus the vocal talent of Josephine Premice exploring “things Afto-Cuban” - but the omission of Ms. Premice’s appearance might have drawn a wider audience to view the program beyond the core audience of jazz fans. The Bud Shank Quartet had appeared earlier in fall on the Dave Garroway Show on October 8th followed by an appearance on the Steve Allen Tonight Show on October 10th. Josephine Premice was no stranger to Los Angeles audiences as she had appeared at the Coconut Grove frequently when in town for motion picture engagements and other dramatic work. Ms. Premice was on the cover of JET magazine in the spring of 1956 and was frequently in the headlines of EBONY magazine.

The Bud Shank Quartet was appearing at Jazz City, alternating sets with the Jimmy Smith Trio.  The quartet enjoyed an extended gig at The Haig when they struck out on their own in January of 1956.  Bud’s interview below supplies some of the background.

Bud Shank and Shorty Rogers were interviewed by Cadence magazine in 1991.  The interviewer asked Bud and Shorty about their tenure with Howard Rumsey’s Lighthouse All Stars.

“BUD SHANK: I can sum it up real quick: it was a helluva lot better job than I was working at the time. I had been with Stan at the same time Shorty was, and prior to that with Charlie Barnet's band, but Shorty left before I did. I left because I got drafted. Fortunately that didn't last too long. They came to their senses and said, "We don't want you after all," and they sent me home. But rather than go back on the road with Stan's band, I decided I wanted to stay in L.A. and did not have a job. I ended up working some jitterbug bands, blues 'n rhythm bands. The one that I worked with the most was named George Redman. We used to play jitterbug contests five nights a week down on Vermont. We had about four or five different clubs that we worked one night a week, goin' around the town. It was a good experience, in as much as it brought out a lot out of me as a small group player. But it was pretty bad music and while I'm doin' this, here sits Shorty and (Jimmy) Giuffre and Shelly (Manne) down at the Lighthouse havin' a great time. All of a sudden there was an opening at the Lighthouse and they said, "Hey, do you want to come join us?" And I said, "Quick! Quick! Sure! Right now!" So I left my jitterbug friends and went to work at the Lighthouse. That was, by then, it must have been 1953, I guess. It was a marvelous experience for me for two reasons: it associated me again with the guy I'd worked with on Kenton's band and it was my first true Jazz job playin' Jazz with a small band. Those two reasons and the fact that it was a much better job meant a lot to me. Gradually, all of us kind of went off into greener pastures. I left there in January of 1956. Claude Williamson and I left and I formed my own quartet and we went to the Haig and worked for six months and then, right after that, started working Monday and Tuesdays at the Lighthouse with my own quartet. So I was associated with the Lighthouse even after I had left the group. I think I did that Monday and Tuesday for a year. Good experience.” 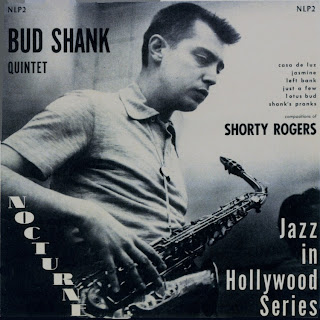 Bud was still a Lighthouse regular when he recorded his first album as leader with Shorty Rogers for Nocturne Records. It received a five star review in Down Beat:


“Nocturne's second LP is a joy unto the ears. First of all, it demonstrates further how excitingly inventive an altoist Bud Shank has become. And in his well-controlled, full-toned flutework on Lotus Bud Shank indicates that he and Frank Wess would seem to be the leading contenders for the jazz flute diadem. On the other end of the front line is Shorty Rogers, blowing with his usual skilled enthusiasm and newly disclosing ar incisive mastery of the flugelhorn. The rhythm section (Roy Harte, Harry Babasin, and Jimmy Rowles) are as dynamically attuned as the front line, and Rowles' piano solos are always stimulating and economically conceived.


All of the tunes were written by Shorty. Thematically I prefer the slowly unfolding lines of Jasmine and Lotus Bud, but the casual figures of the up-tempo numbers lend themselves swingingly to ad lib elaboration, and Casa de Luz has particular, sharp distinction. The expressive gamut of this group is worth contrasting with the Mulligan and Baker units. There is no aura of the fragile glasshouse here. Recording is good; engineering is by John Neal. Whether there is such an entity as "west coast jazz" or not, this is fine work by any definition, geographical or just musical. (Nocturne NPL3)” 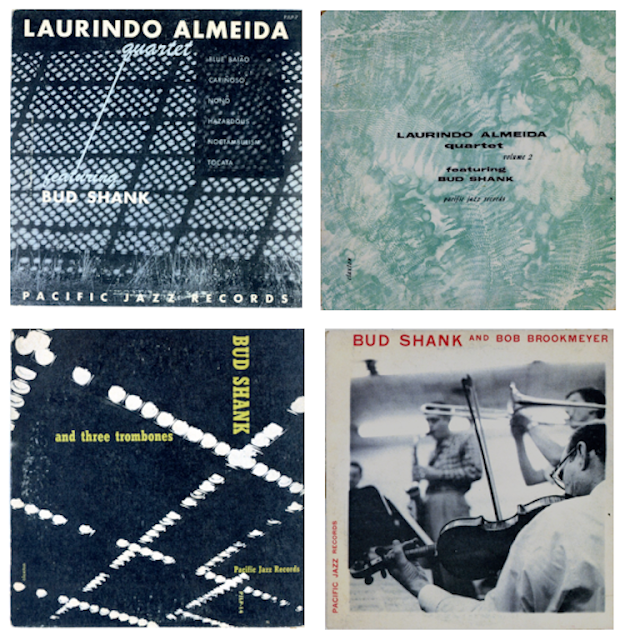 Bud Shank’s jazz career shifted into high gear during his years with the Lighthouse All Stars.  In addition to his recordings for the Lighthouse, Bud performed on record with Pete Rugolo, Stan Kenton, Bob Cooper, Johnny Holiday, Chet Baker, Herbie Harper, Bob Brookmeyer, Kay Brown, Bill Perkins, to name a few.  By the time that Bud’s quartet appeared on Stars of Jazz he had released several albums featuring his fine work on alto saxophone. 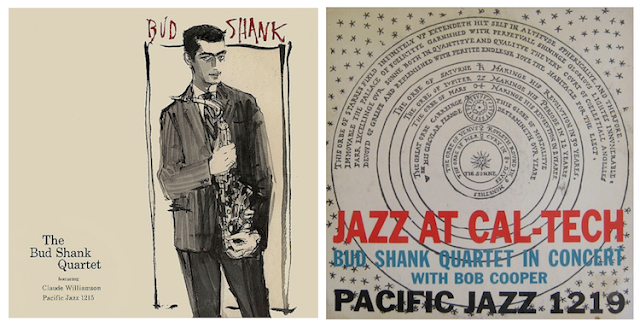 Born in Brooklyn in 1926 to Haitian parents, Josephine Premice grew up in New York and Haiti and studied dance with Martha Graham and Katherine Dunham. She began her theatrical career in the 1945 production of ''Blue Holiday'' at the Belasco Theater alongside Ethel Waters and Josh White, the folk singer.  She was photographed by William Gottlieb while performing at the Village Vanguard. During that engagement she would forge a lifelong friendship with Max and Lorraine Gordon.  Here are a few glimpses of her career from various internet sources: 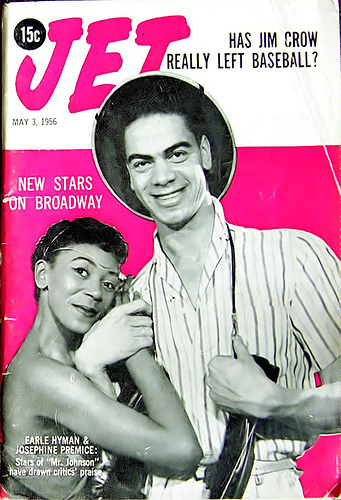 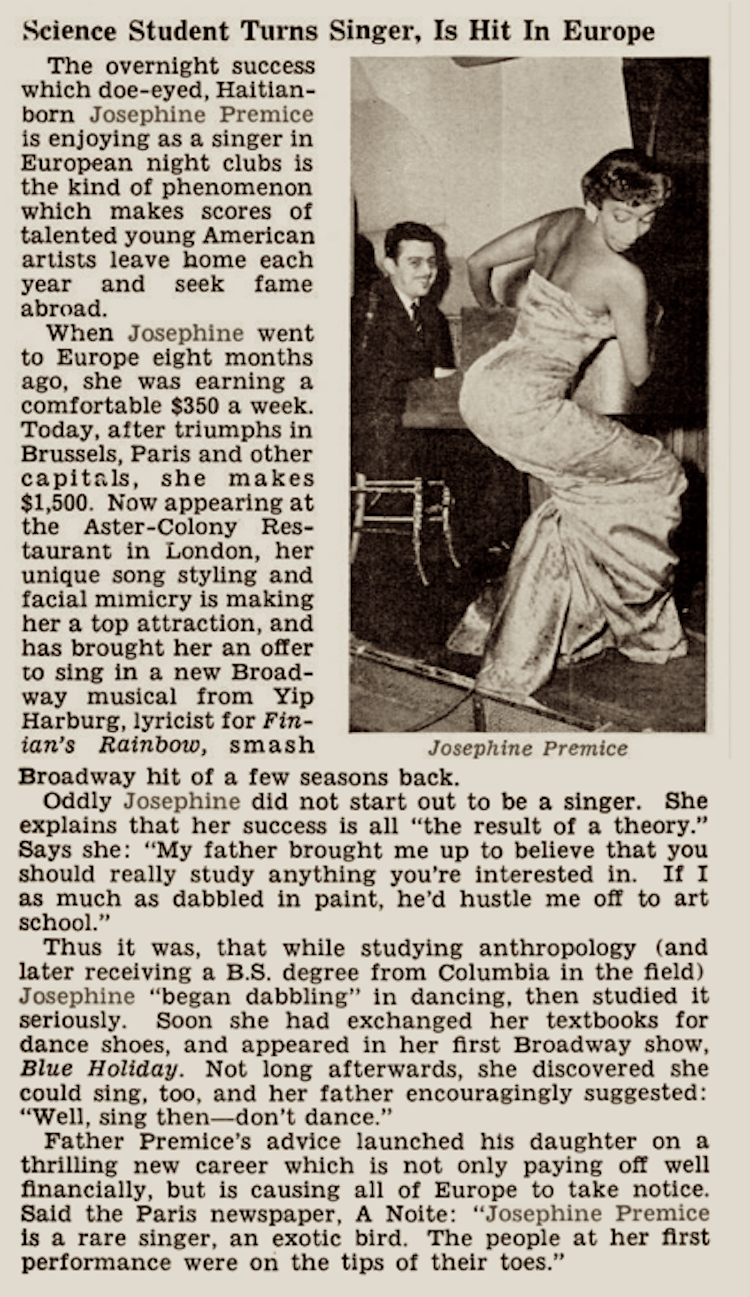 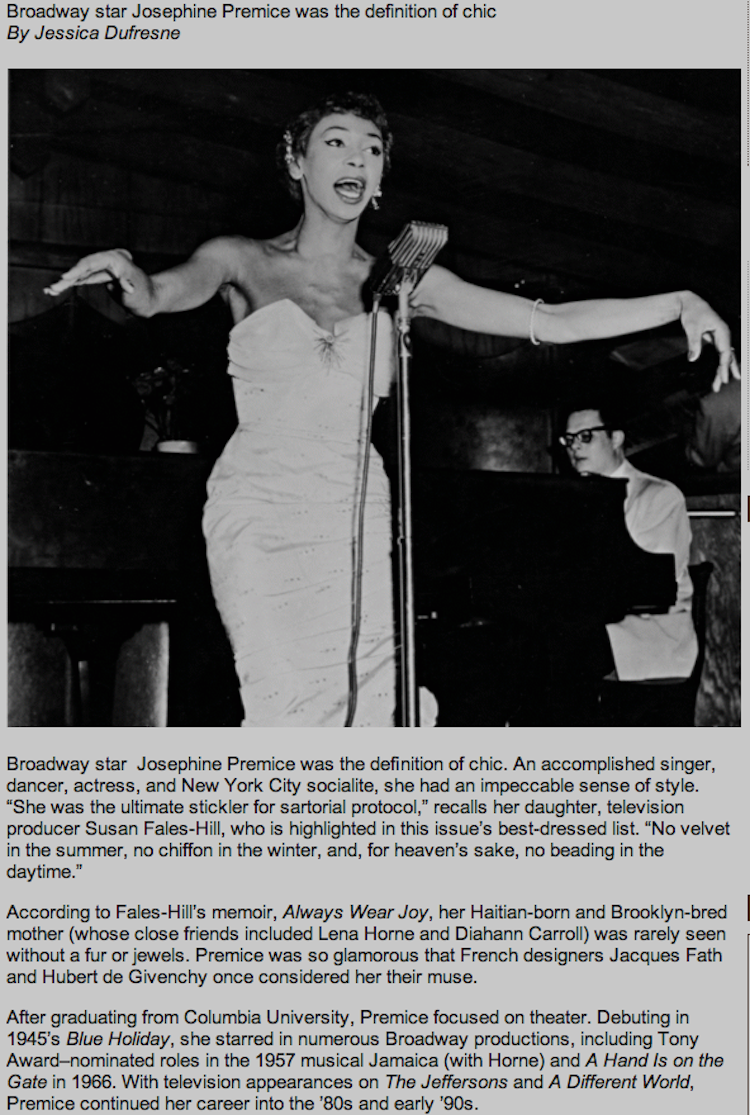 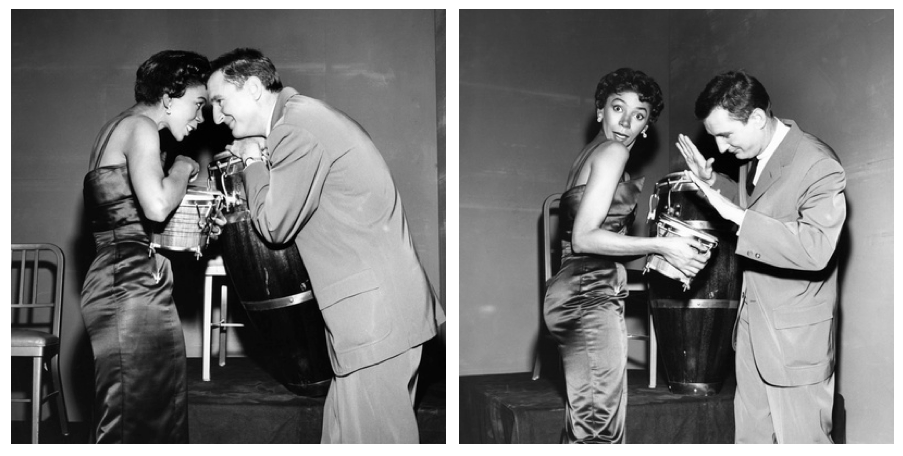 © Howard Morehead, CAAM
Howard Morehead was a frequent presence on the Stars of Jazz set.  He photographed Premice and Troup as they used bongos and a conga drum as props. Following her appearance on Stars of Jazz Ms. Premice would record her first LP for Gene Norman in December of 1956. 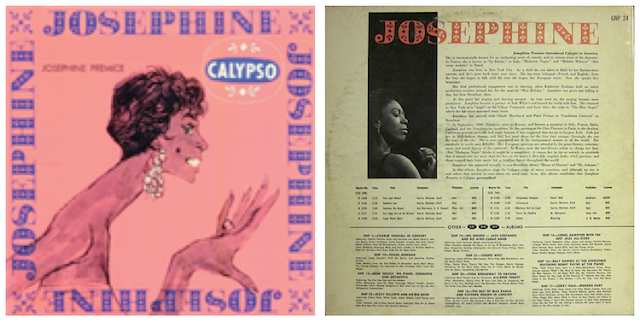 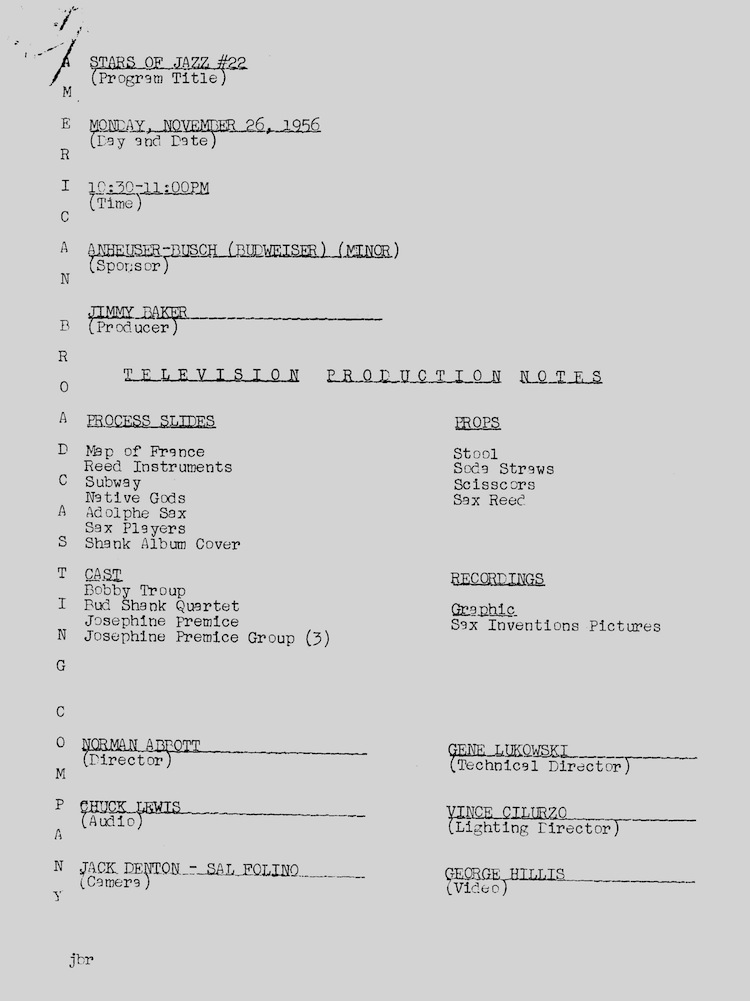 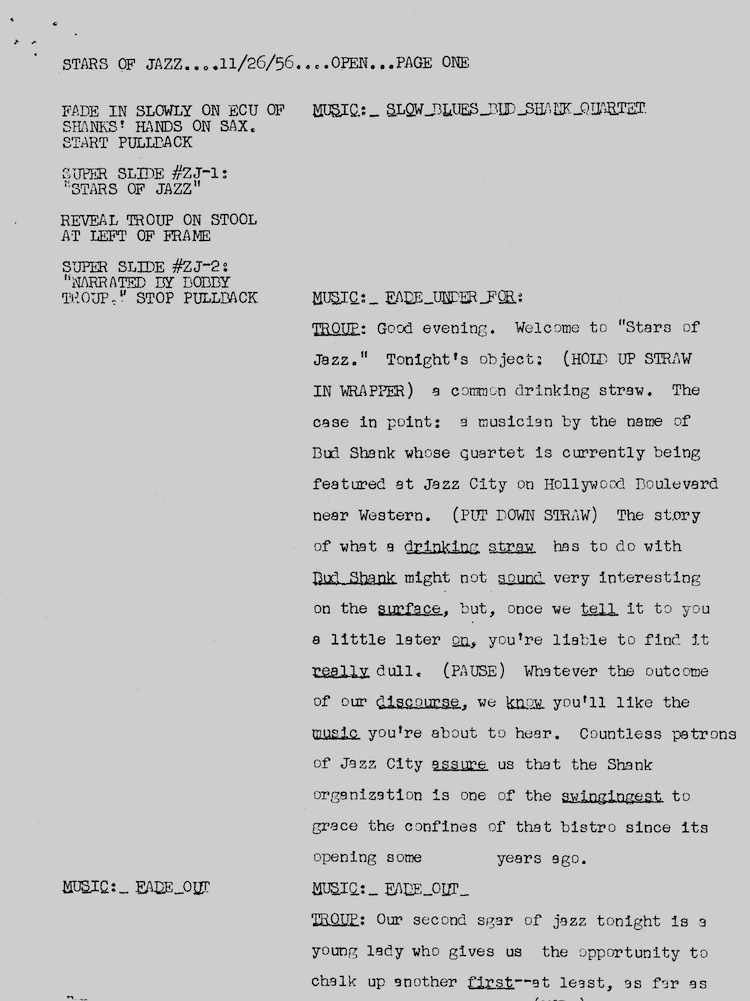 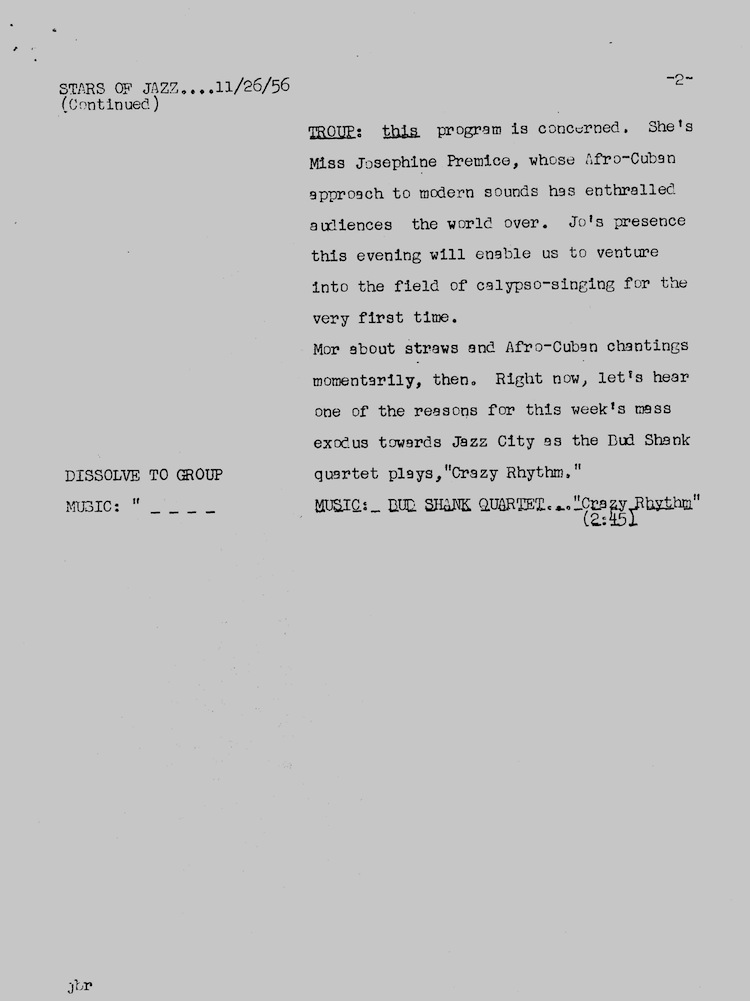 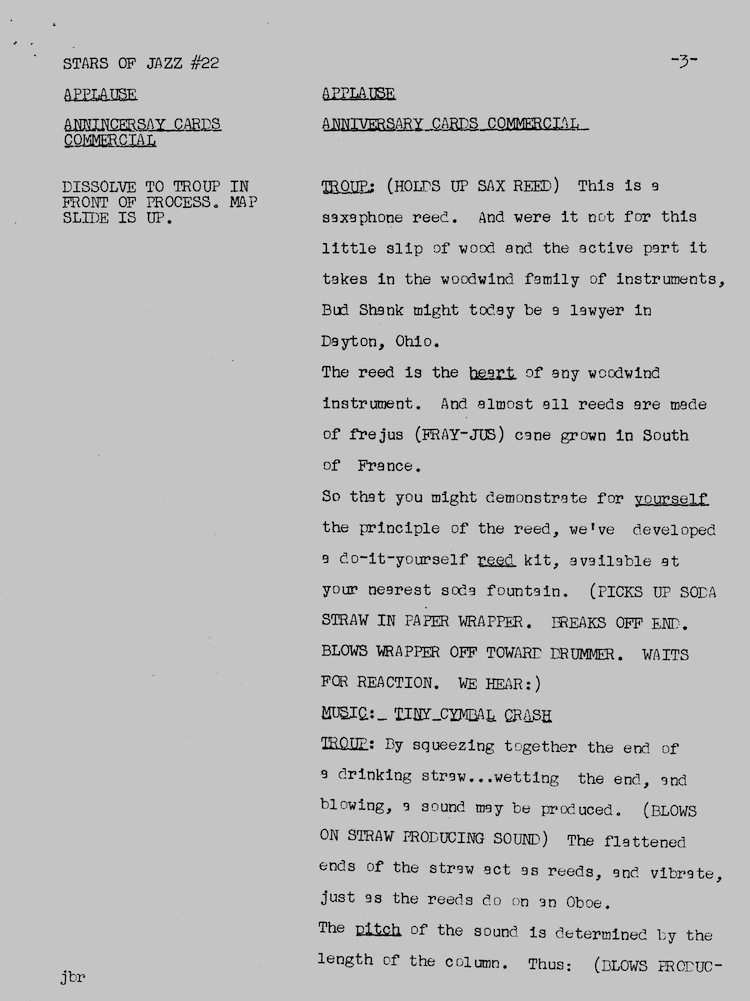 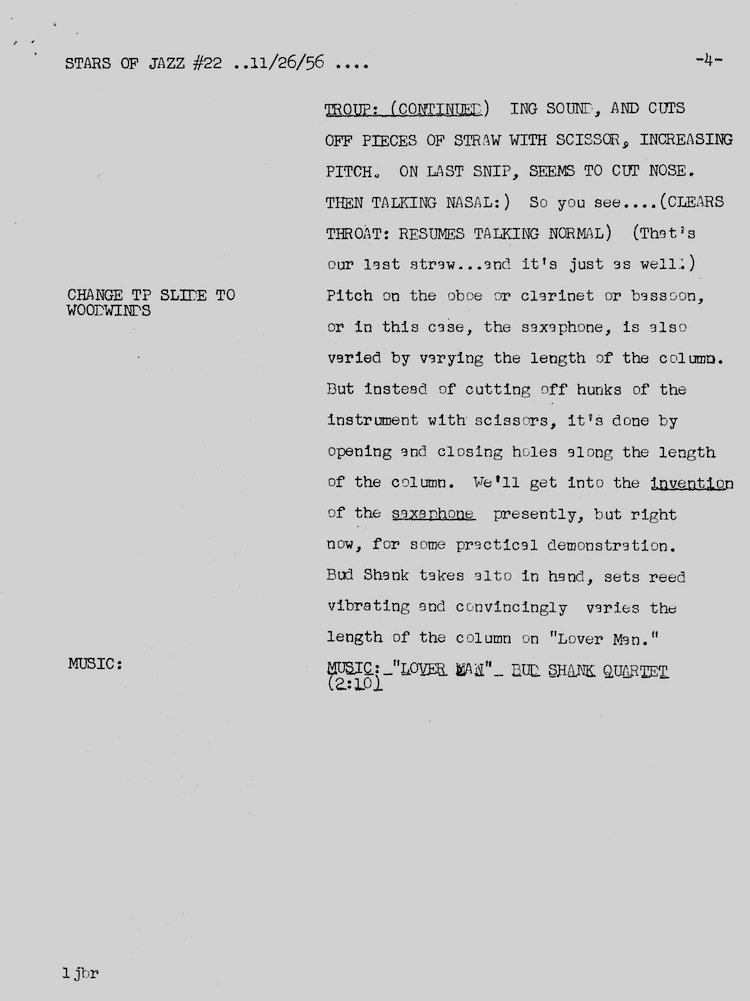 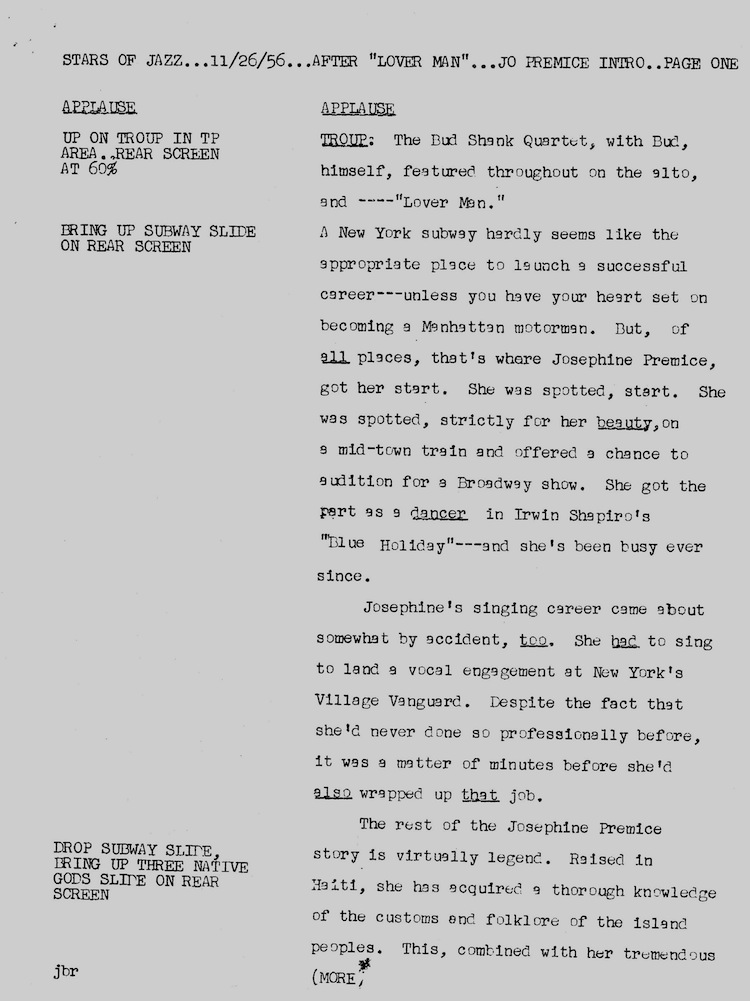 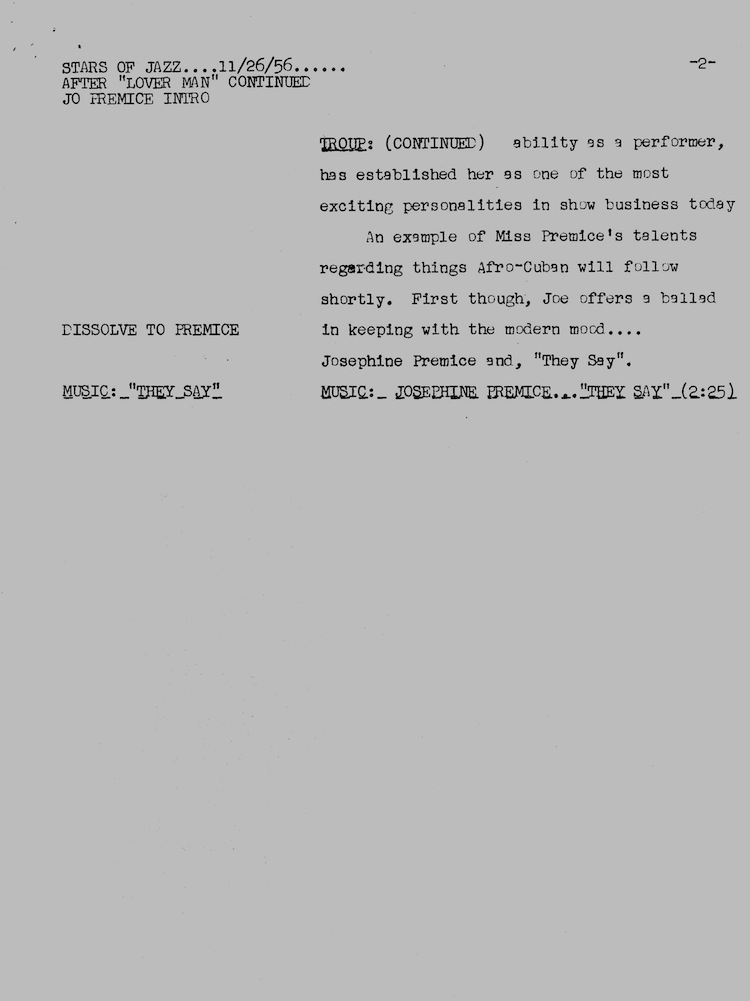 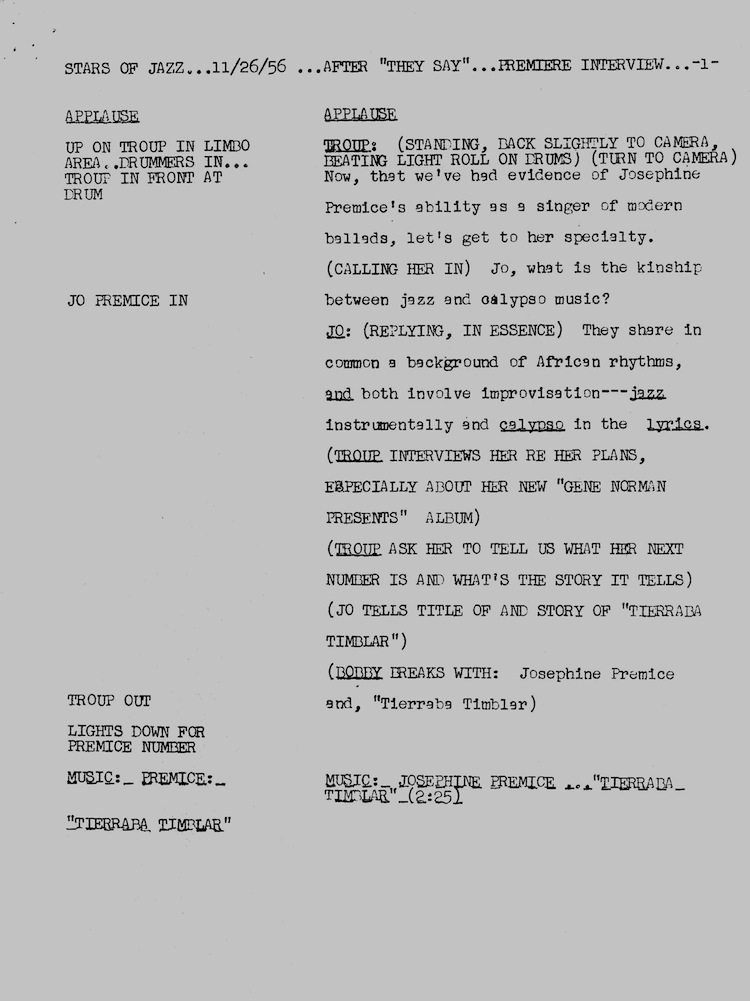 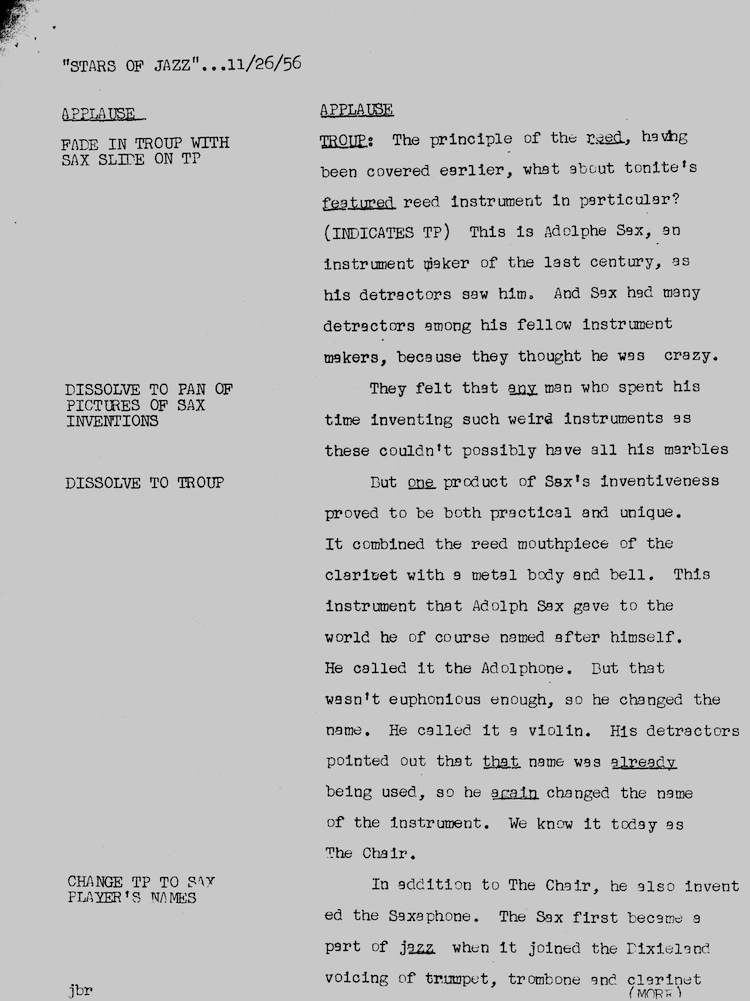 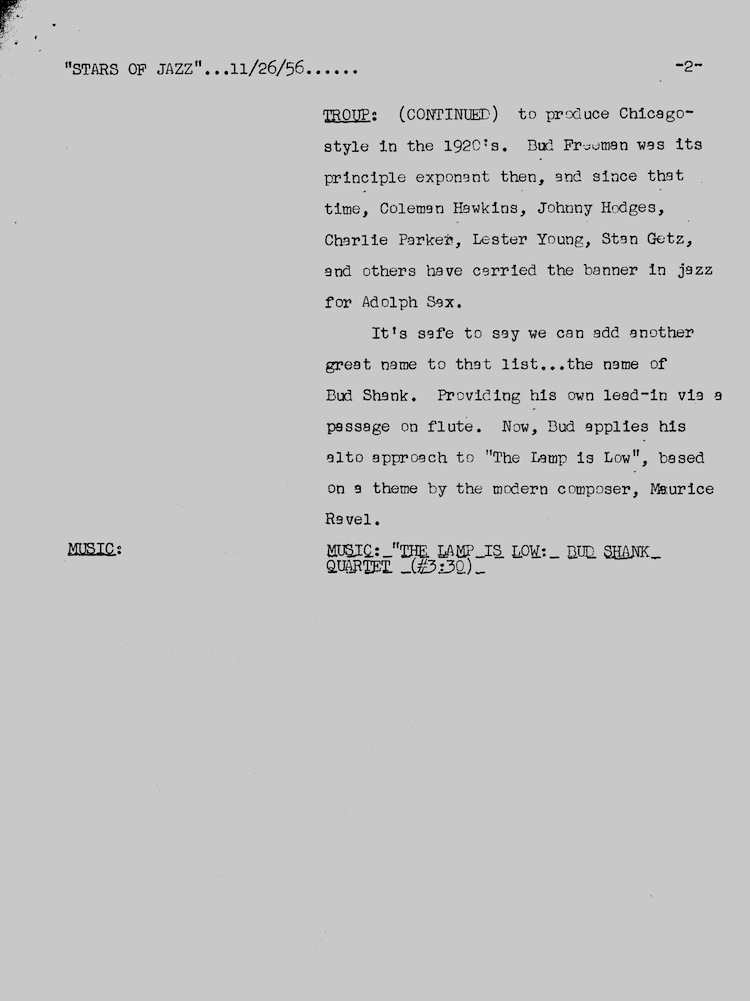 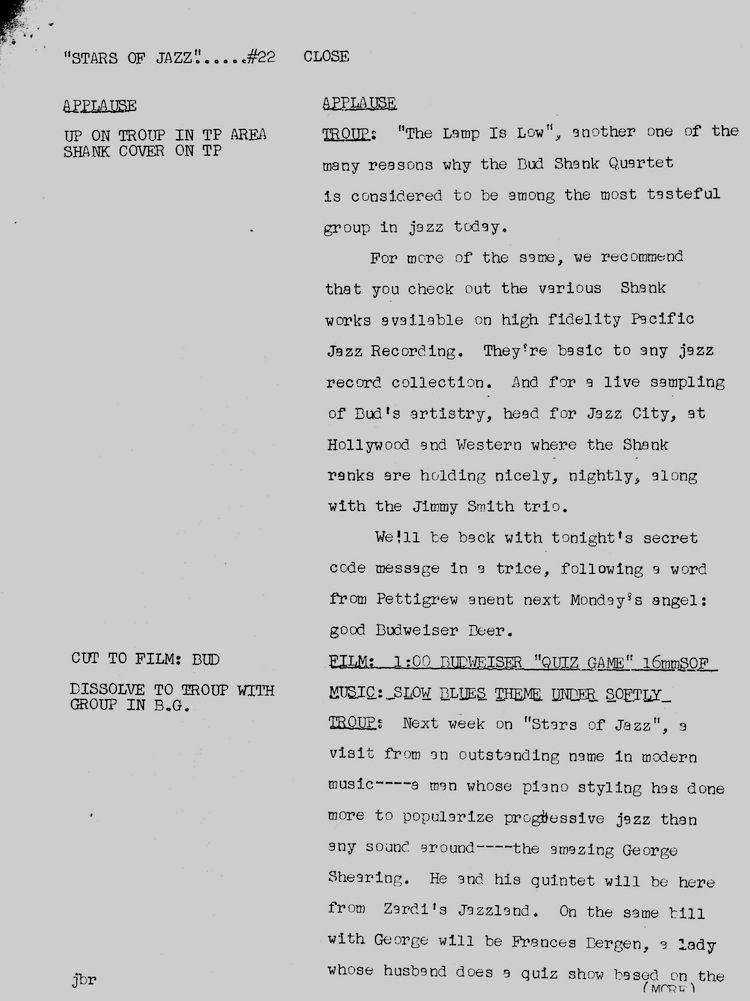 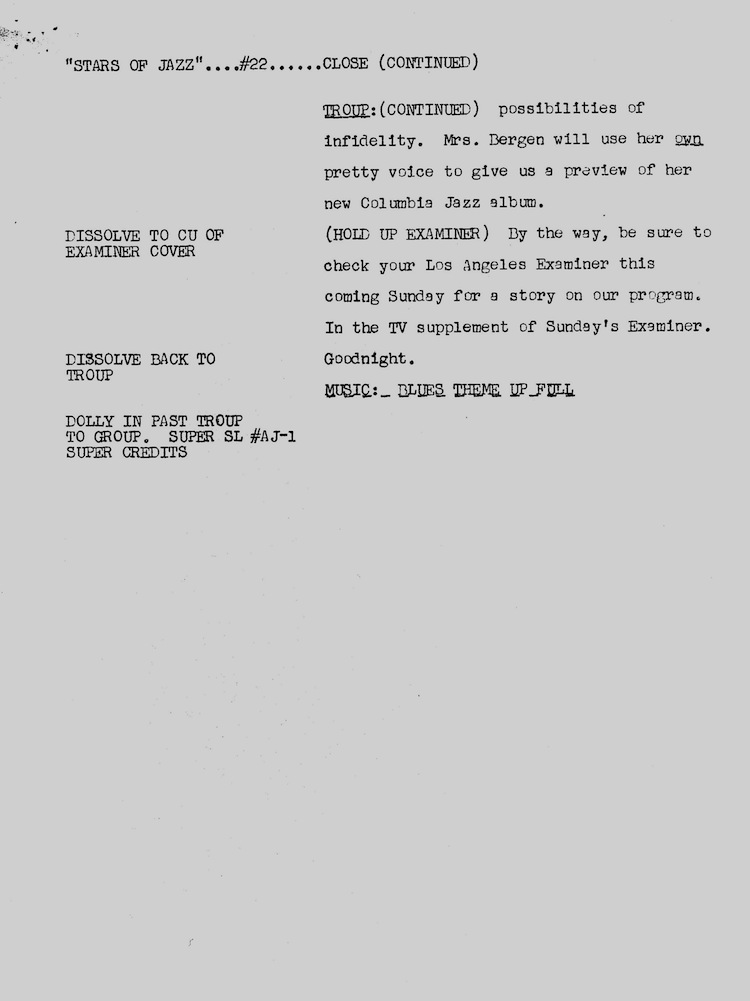 Posted by James Harrod at 12:46 PM No comments: