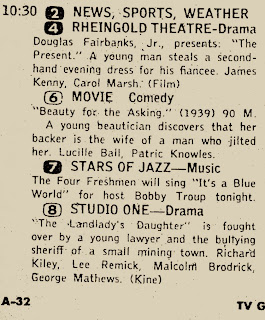 The TV Guide listing for the December 10, 1956 airing of Stars of Jazz failed to mention the appearance of the Jack Montrose Quintet or the two dancers who had choreographed a modern dance piece to an original composition by Jack Montrose that would be performed during the course of the program. The Four Freshman had recently become regulars on The Ray Anthony Hour that was also broadcast on channel 7, KABC, the home of Stars of Jazz. 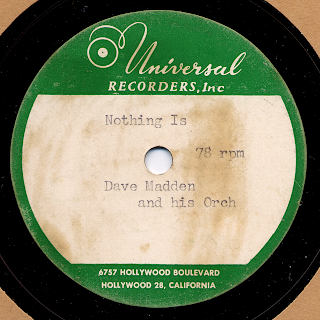 Jack Montrose had relocated to Los Angeles in the late 1940s and became a regular at jam sessions around town where his tenor work landed him on gigs with Dick Pierce, Tom Talbert, Shorty Rogers and Jerry Grey.  His formal training was gained at Los Angeles City College, Los Angeles State College and the Westlake School of Music.  Montrose was part of a rehearsal ensemble at Westlake that included Dave Madden, Bob Gordon. Johnny McComb and Forrest Westbrook with a rhythm section.  The ensemble played the off night at The Haig in February and March of 1953 where Bud Shank subbed for Bob Gordon on baritone.  This exposure to Dick Bock, still in charge of off night entertainment at The Haig, who had recently formed the Pacific Jazz label, would result in Bock’s asking Montrose to organize a similar ensemble session to showcase the talents of Chet Baker. 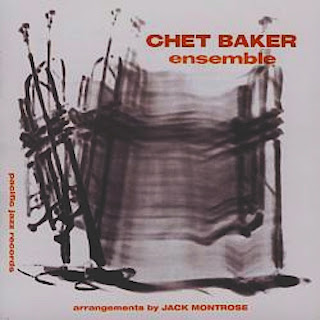 Jack Montrose assembled the same instrumental palette that he had composed for with the Westlake ensemble.  Joining Montrose on tenor sax was Herb Geller who doubled on alto for solos; Bob Gordon on baritone; Russ Freeman, piano; Joe Mondragon, bass; Shelly Manne, drums and Chet Baker on trumpet.  The resulting album, CHET BAKER ENSEMBLE, PJLP-9, was a bestseller for Pacific Jazz and introduced a new facet of Chet Baker’s talent.  It also launched the composing and arranging career of Jack Montrose. 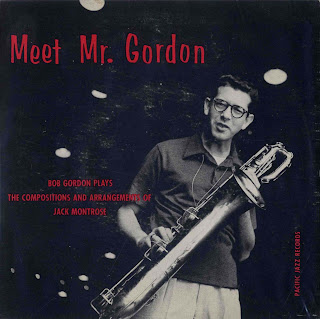 Composing and arranging chores soon followed for another Chet Baker album, this time on a recording date for Columbia Records featuring Chet backed by strings.  In the spring of 1954 Montrose orchestrated another album for Pacific Jazz that showcased his friend and musical counterpart, Bob Gordon.  Once again the entire album featured compositions and arrangements by Jack Montrose and two of those compositions, MODUS OPERANDI and FOR SUE would be performed on his Stars of Jazz appearance.  FOR SUE was named in honor of Bob Gordon’s wife, Sue.  DOT’S GROOVY was also named for a spouse, this time the wife of Woody Woodward, Dotty Woodward. Woody had recently joined Pacific Jazz as Bock’s right hand man and Dotty had been with Pacific Jazz since February of 1953.  Dotty had two other tunes named in her honor, Russ Freeman composed WOODY’S DOT for her and Johnny Mandel composed DOT’S WHAT for her. 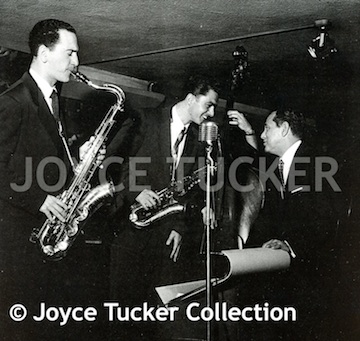 July of 1954 found Jack Montrose opposite Art Pepper in a quintet playing The Tiffany Club where they alternated sets with the Clifford Brown-Max Roach Quintet.  The Pepper-Montrose group included Forrest Westbrook on piano, Bob Whitlock on bass and Billy Schneider on drums.  Dick Bock had recorded Art Pepper earlier in a quartet setting for Albert Marx’s Discovery label and he urged Marx to record this quintet as well.  Montrose and Pepper would go into the recording studio in August for Discovery with Claude Williamson replacing Westbrook and Monty Budwig replacing Whitlock.  The drum chair was also dfifferent with Paul Vallerina and Larry Bunker providing the beat. 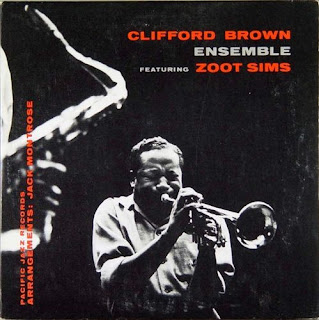 Dick Bock had also approached Clifford Brown during The Tiffany engagement who had agreed to record for Pacific Jazz.  The session would be an ensemble group with Jack Montrose handling the arrangements.  The ensemble instrumentation was tweaked slightly with Stu Williamson on valve trombone along side Zoot Sims on tenor, Bob Gordon on baritone and a top notch rhythm section with Russ Freeman, Joe Mondragon or Carson Smith and Shelly Manne backing Clifford Brown’s trumpet artistry.  The resulting album, CLIFFORD BROWN ENSEMBLE, PJLP-19, was another best selling album for Pacific Jazz and further cemented Jack Montrose’s reputation as a gifted arranger and composer. 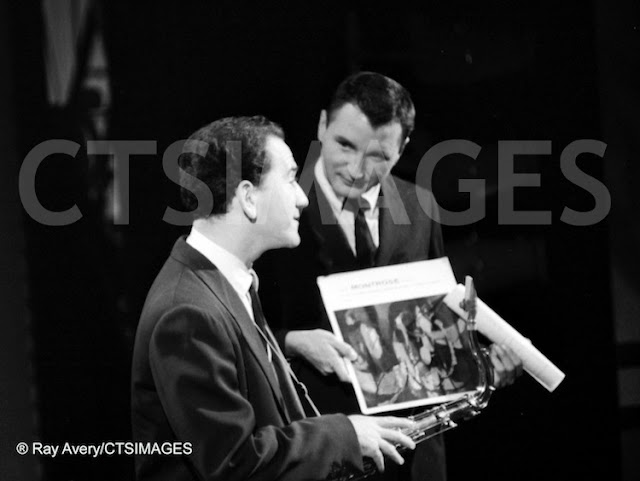 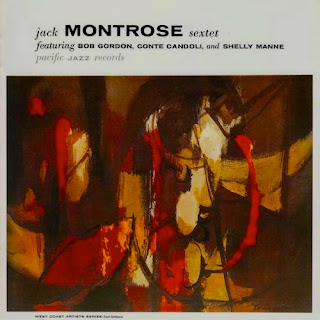 A year later he would record his first album as leader for Pacific Jazz, this time pairing down the ensemble setting to a sextet with Conte Candoli on trumpet plus Bob Gordon on baritone and a rhythm section with Paul Moer on piano, Ralph Peña on bass and Shelly Manne on drums.  Bobby Troup would feature the Pacific Jazz album during the broadcast as seen in the above photo taken by Ray Avery. 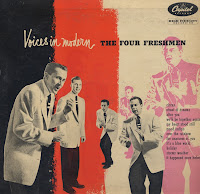 The Four Freshmen were well established in 1956 as one of America’s top vocalese jazz groups.  Steve Cerra’s superb Jazz Profile of the group zeros in on the unique sound of the quartet and how they achieved it. 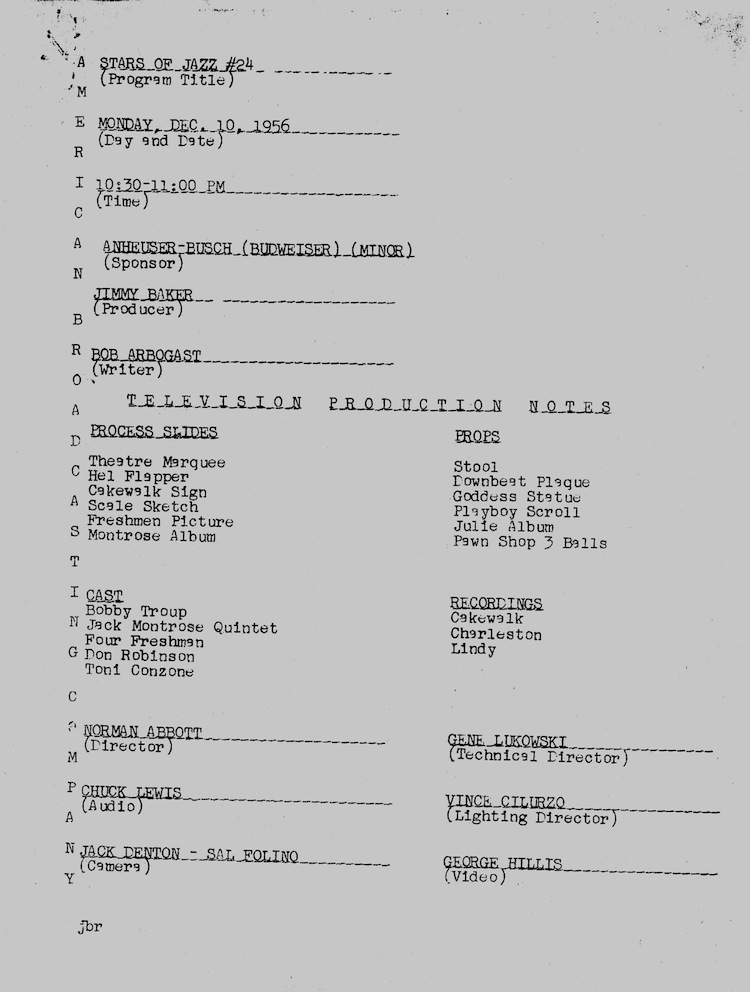 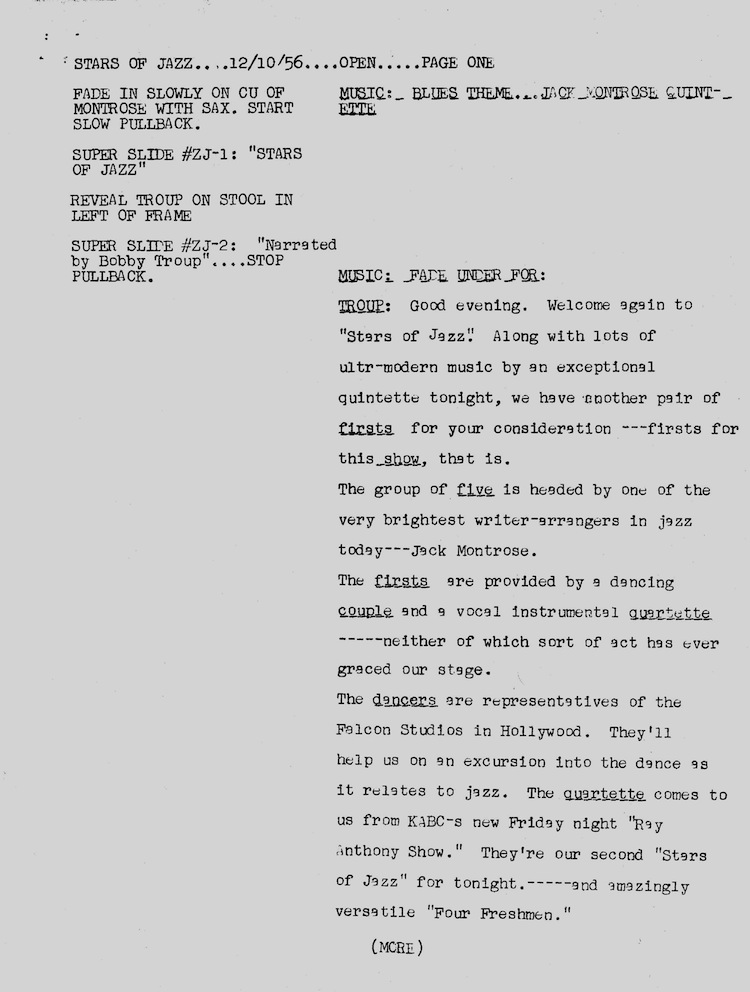 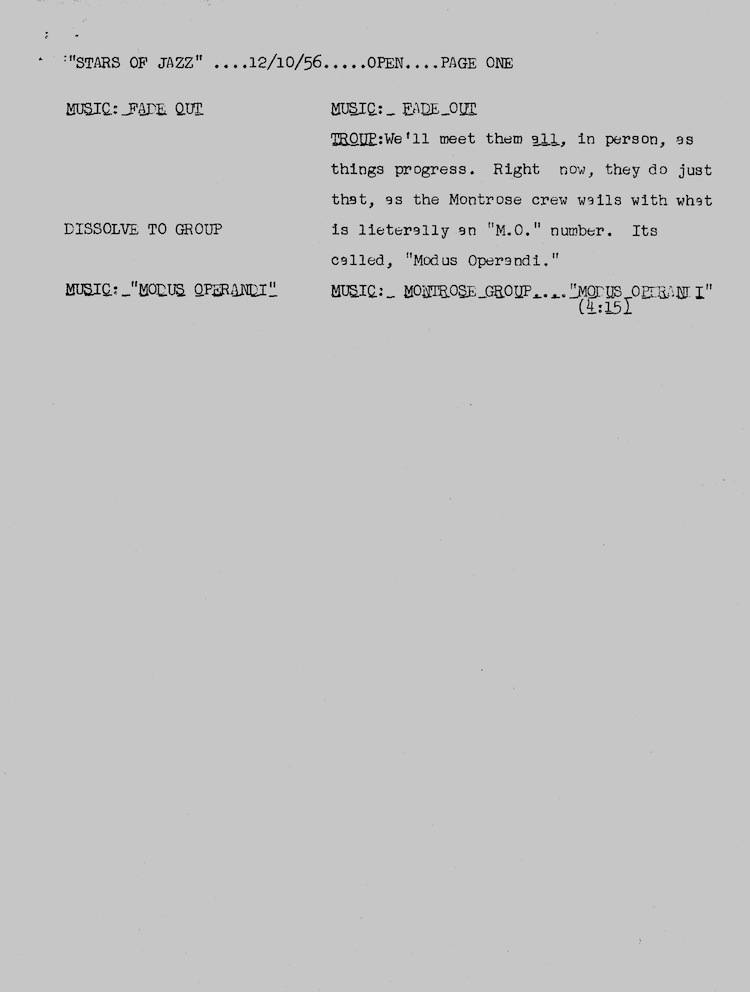 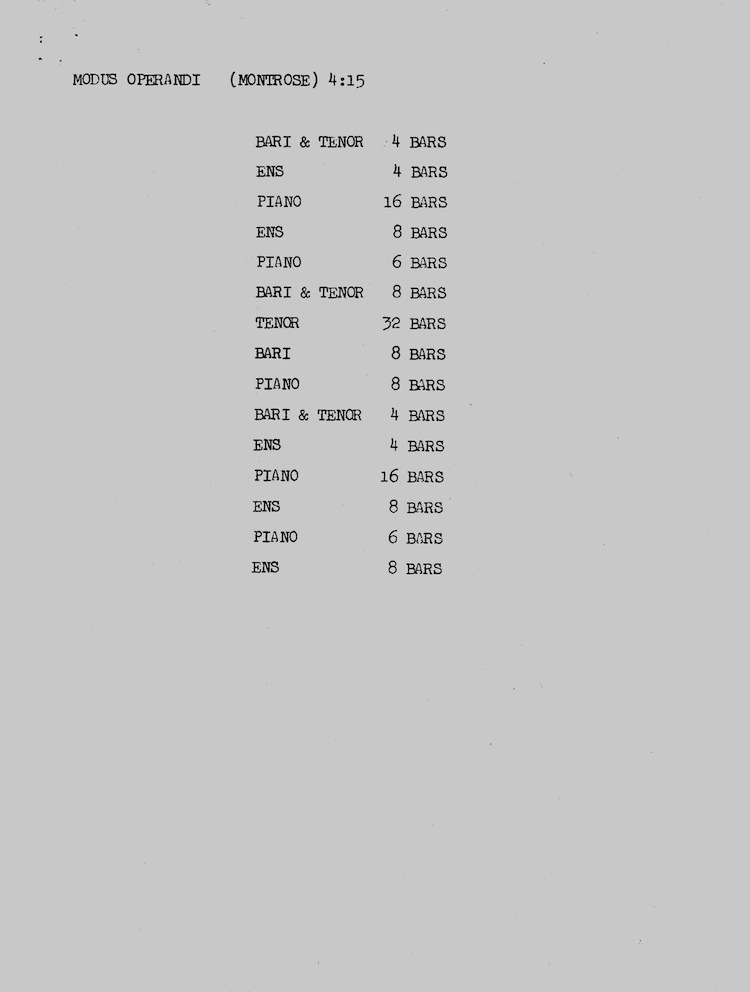 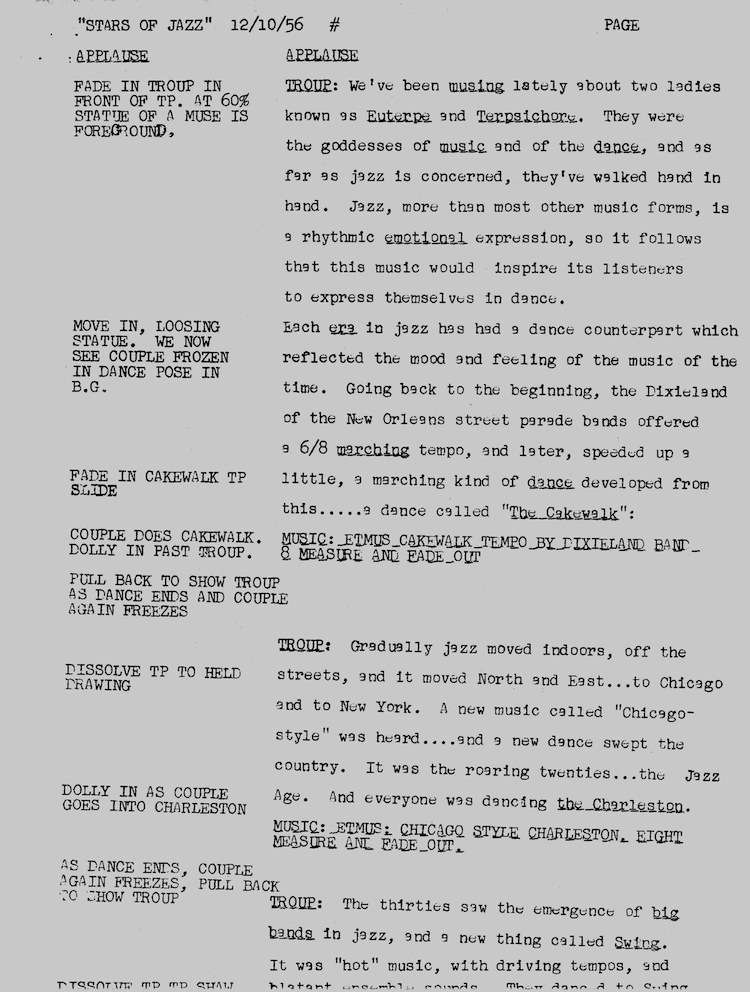 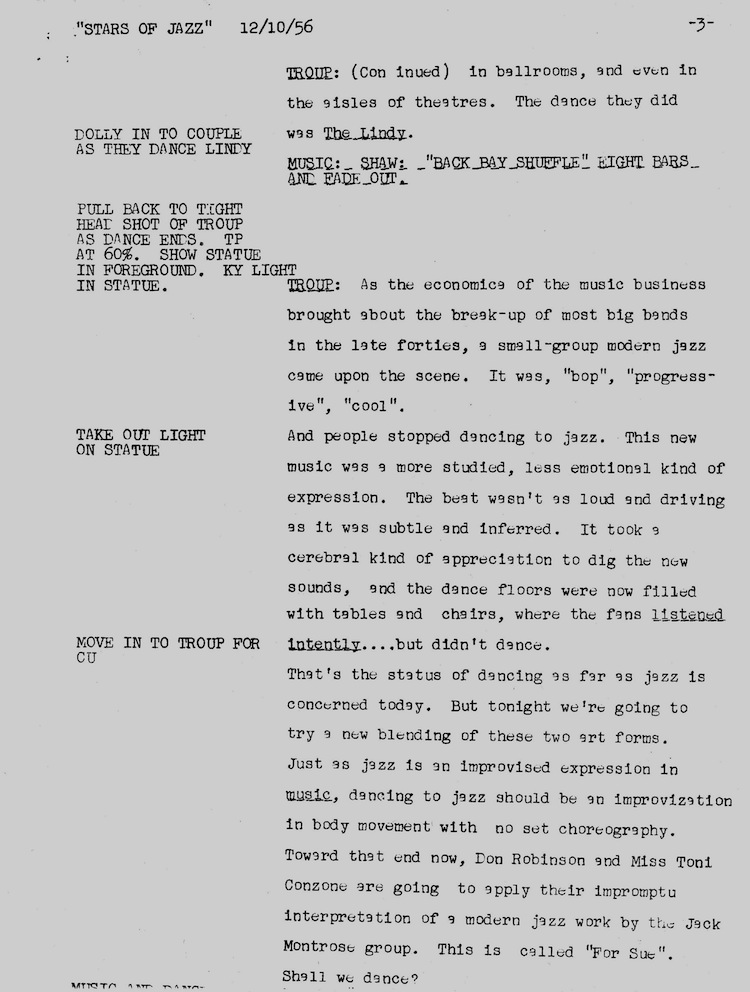 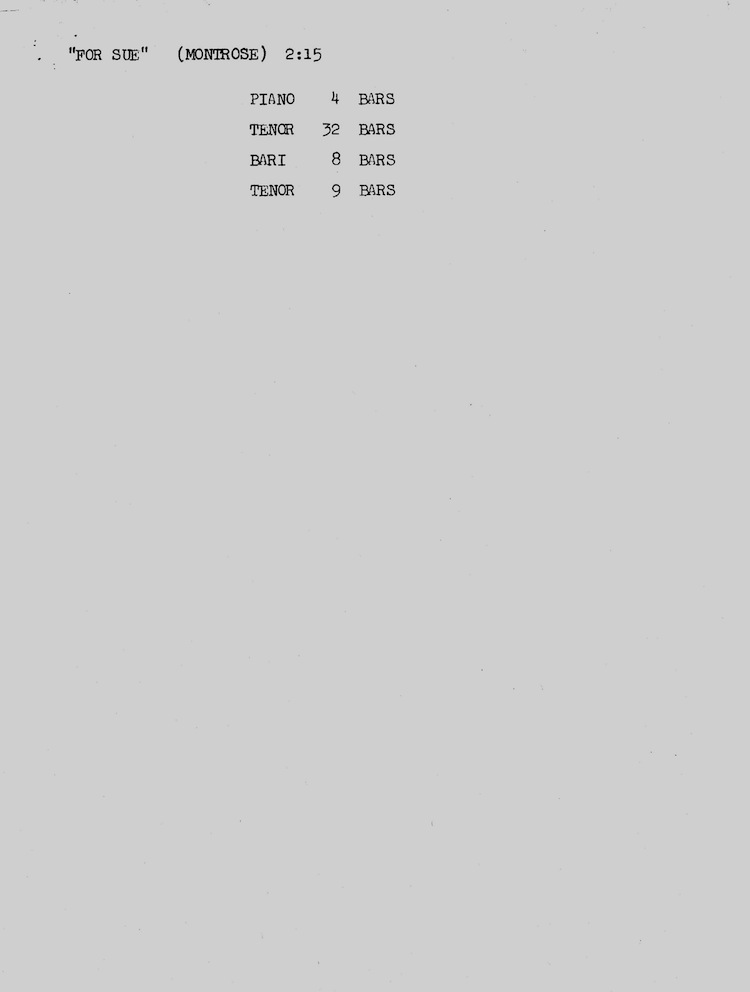 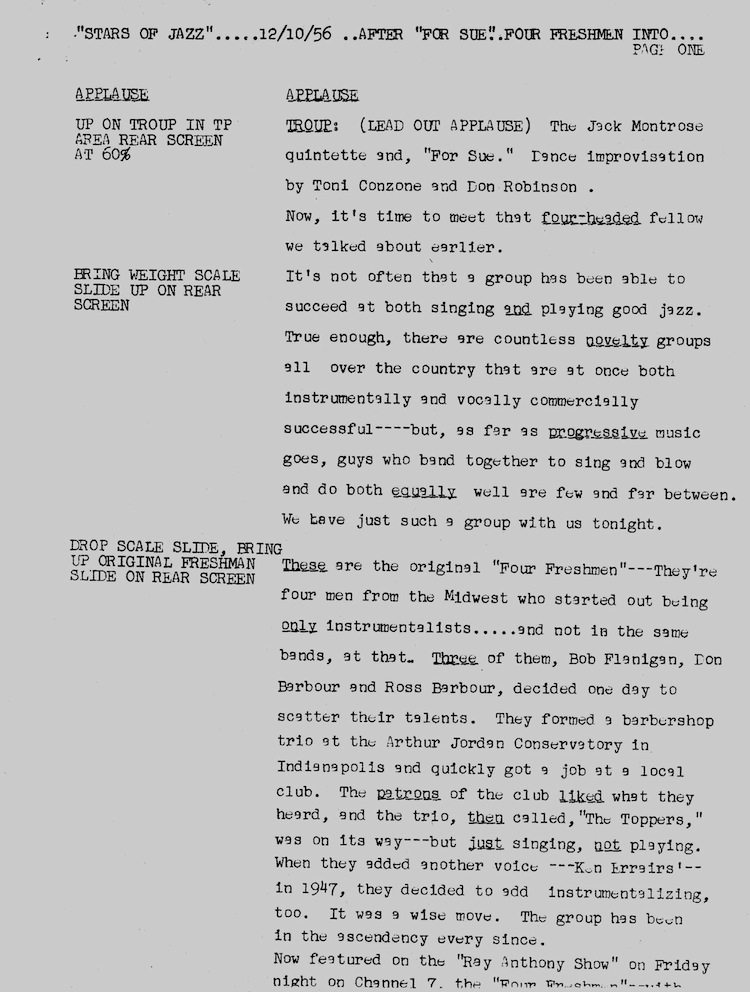 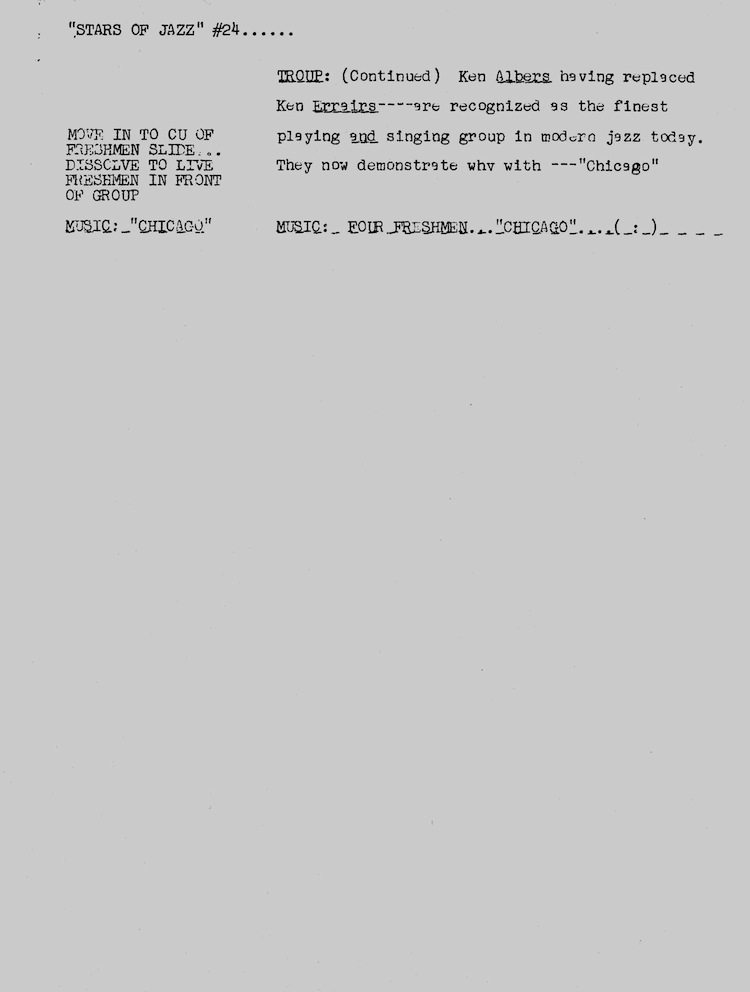 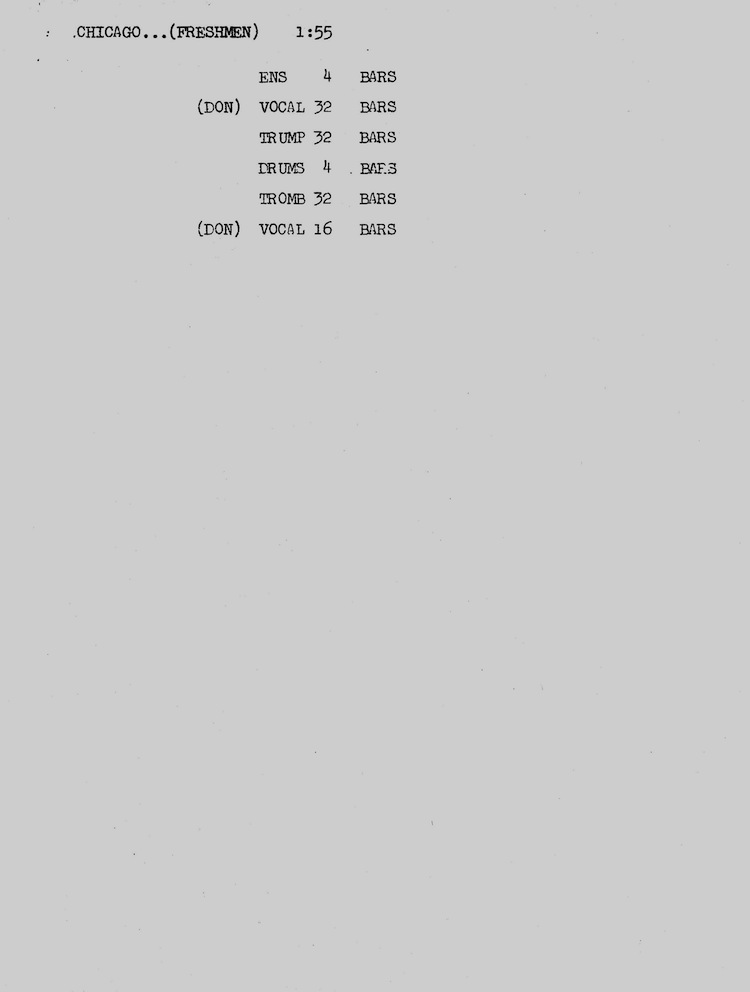 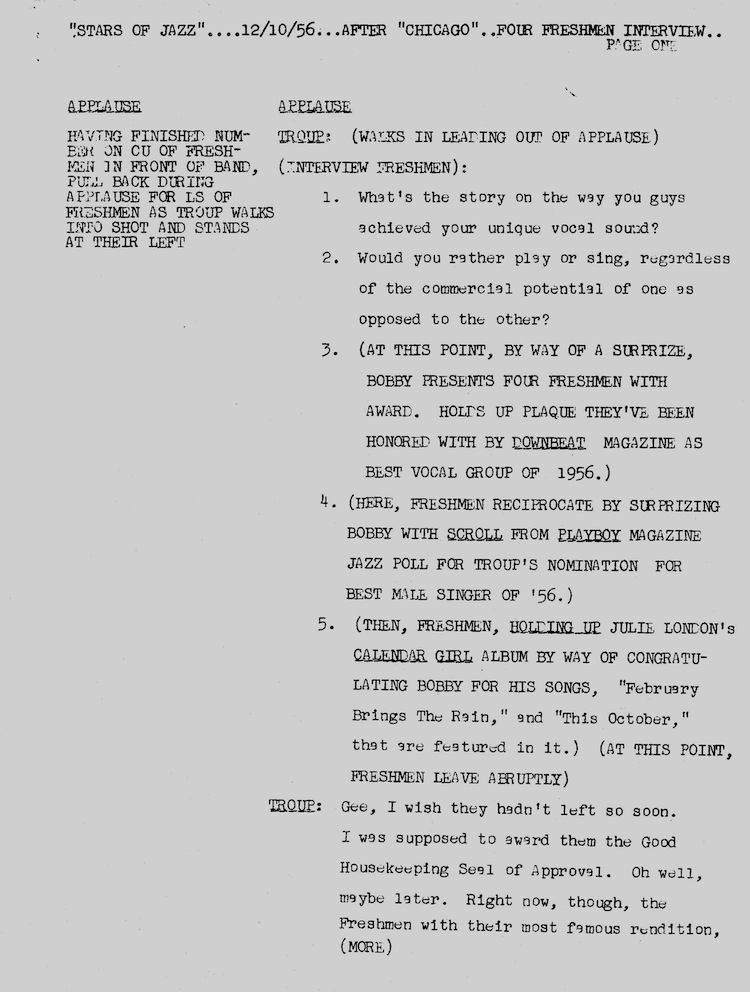 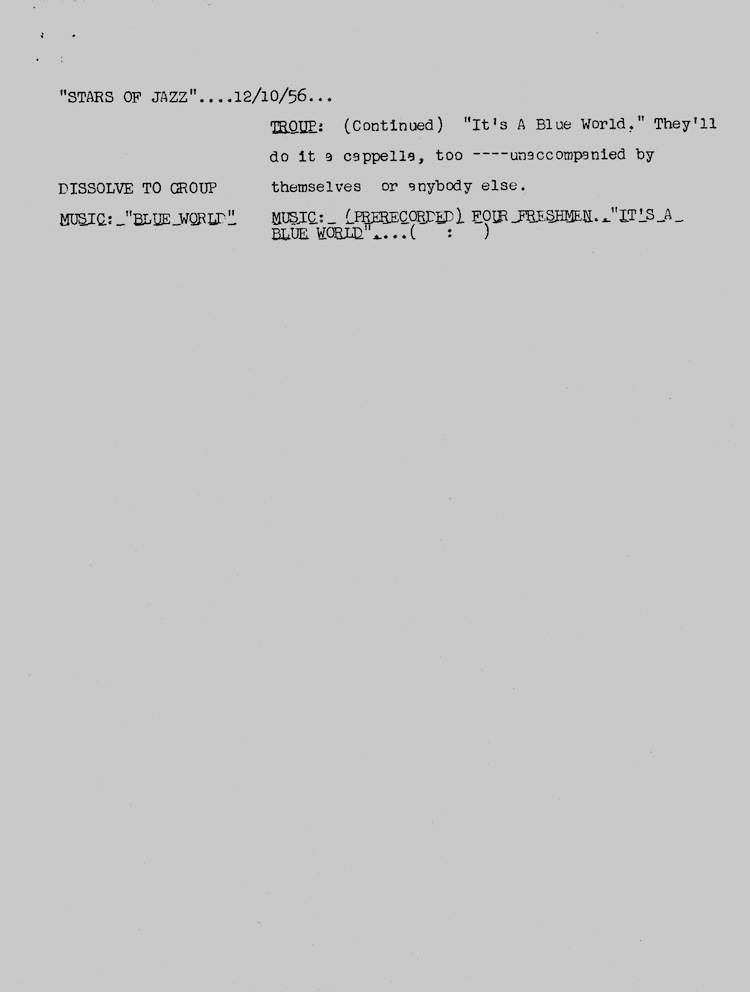 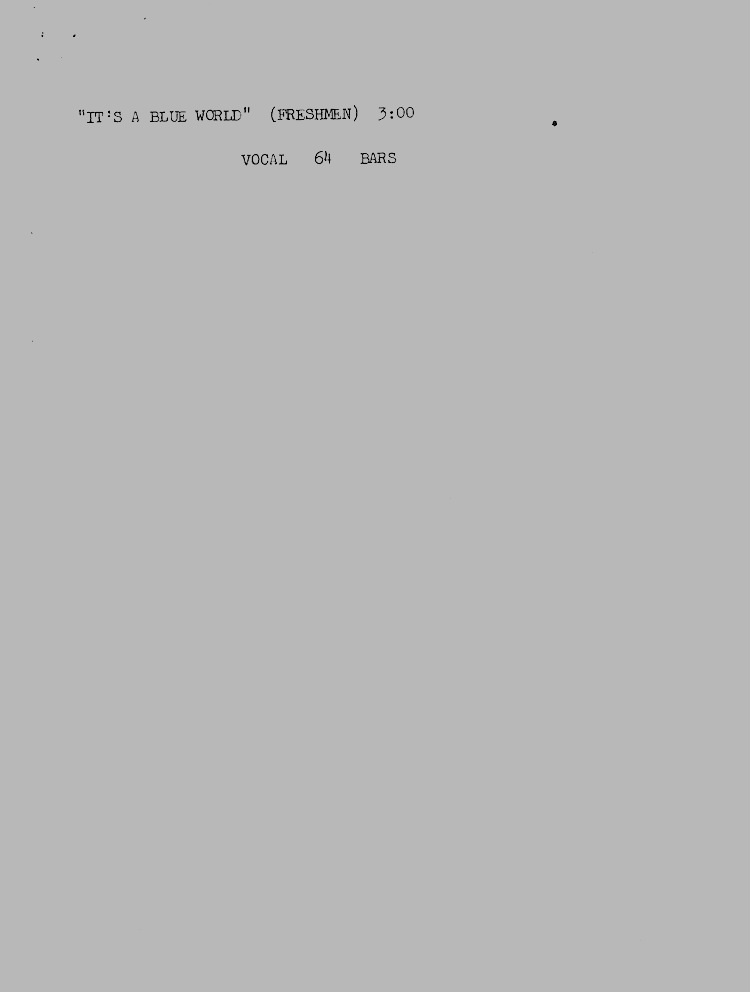 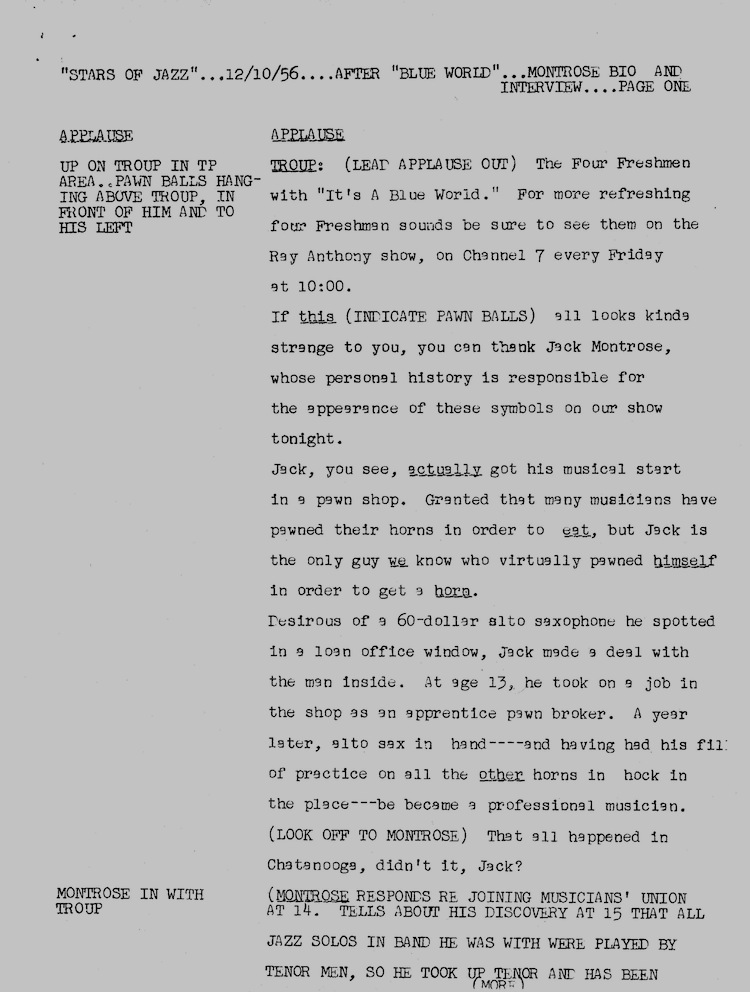 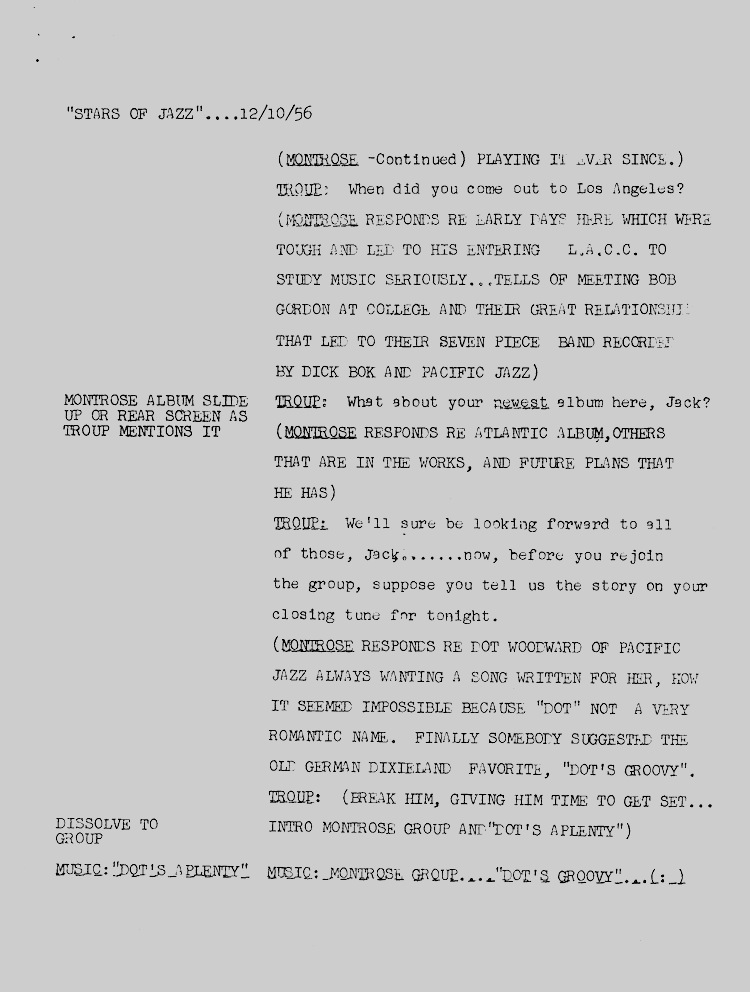 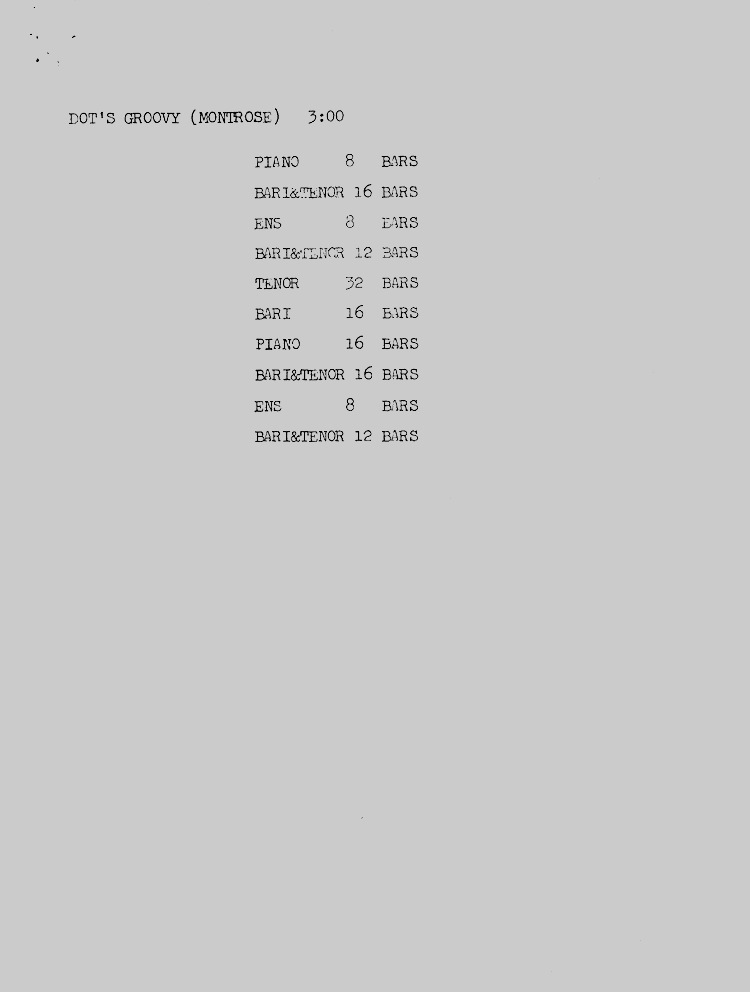 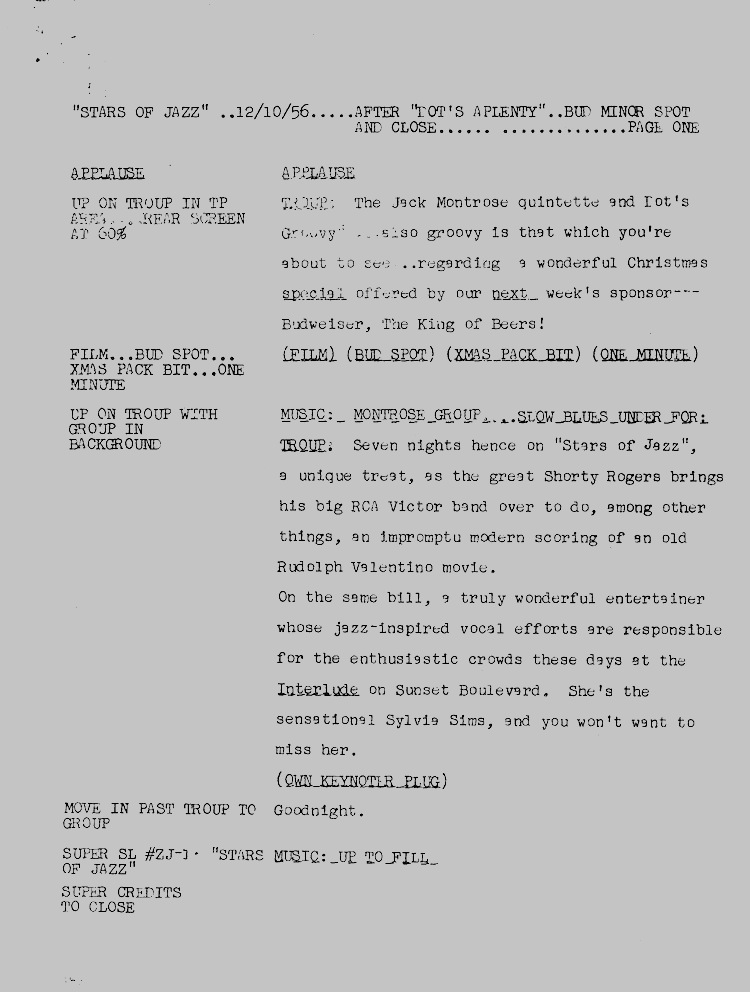