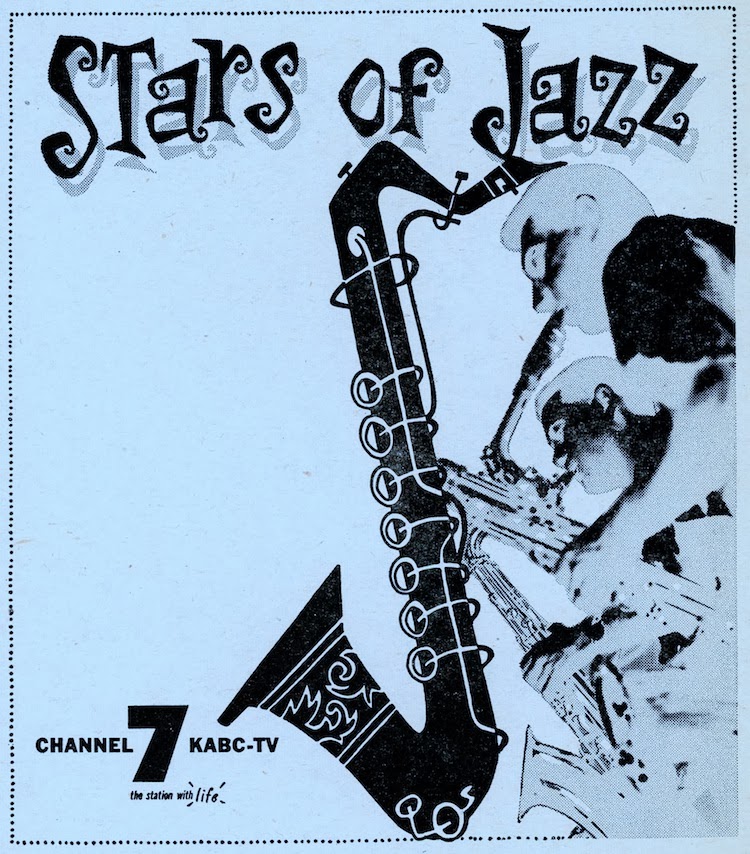 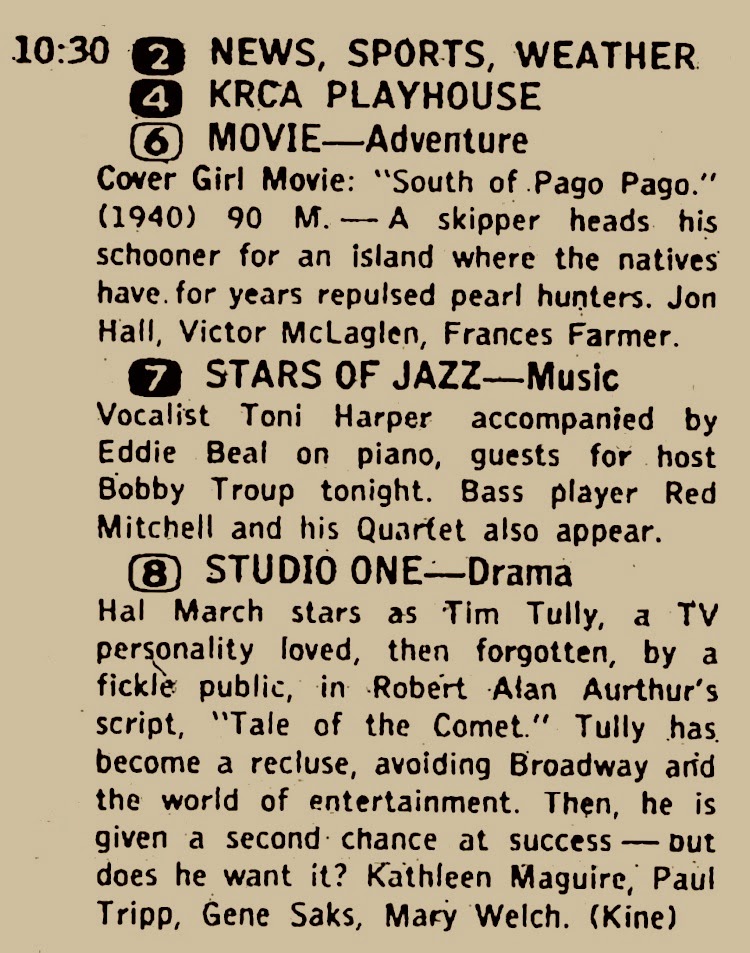 The TV Guide listing for the Stars of Jazz broadcast of February 18, 1957, gave top billing to vocalist Toni Harper who would be accompanied by Eddie Beal on piano.  The featured jazz instrumental group scheduled for the show was the Red Mitchell Quartet with James Clay on tenor saxophone and flute, Lorraine Geller on piano, and Frankie Capp on drums.  Bruce Lansbury’s script for the show included a detailed examination of all of the components that make up a string bass, rare woods from exotic locals for back, front and sides, animal guts for the strings, horse tail hair for the bow, etc.

After learning dance under Maceo Anderson, Harper was cast by the choreographer Nick Castle in Christmas Follies, at the Wilshire Ebell Theatre in 1945. She later went on to perform on stage with Herb Jeffries and Cab Calloway.  Harper recorded "Candy Store Blues" in 1946, which became a platinum record, featured vocalist on Gene Norman’s Just Jazz in 1948, appeared twice on Toast of the Town (later The Ed Sullivan Show) in 1949, and made her third and final appearance on the show in 1950. 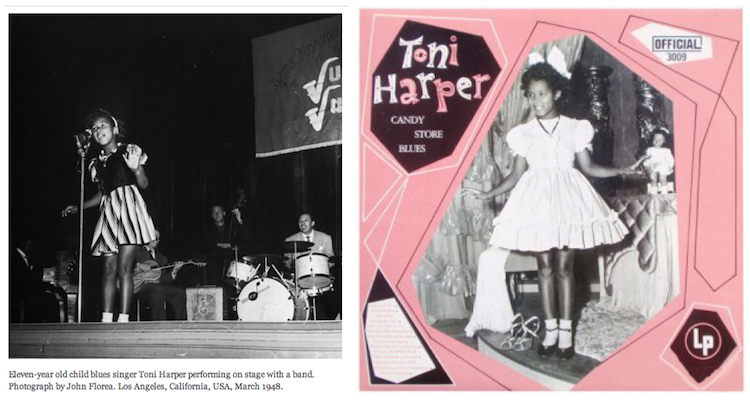 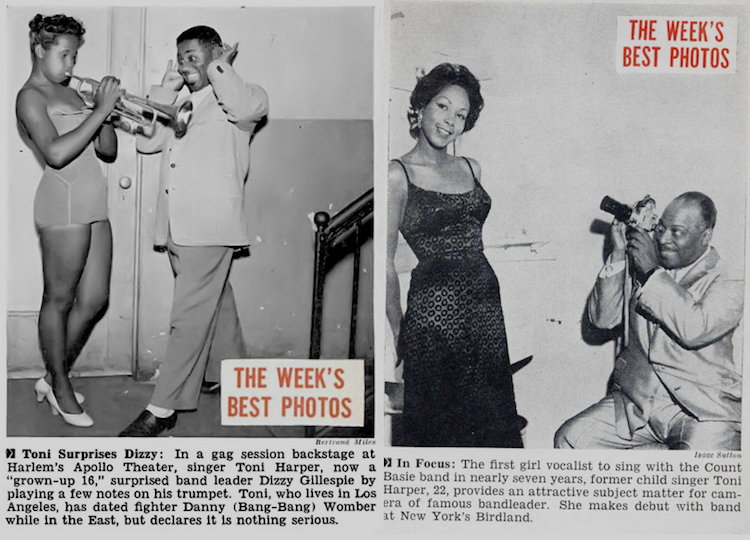 Toni Harper was a frequent guest on the pages of JET magazine as seen in the above pages with Dizzy Gillespie and Count Basie.

After success as a child singer, Harper recorded her first album, Toni, for Verve Records in 1955, with the Oscar Peterson trio. She made two further albums, arranged by Marty Paich, Lady Lonely (1959) and Night Mood (1960), for RCA Victor. 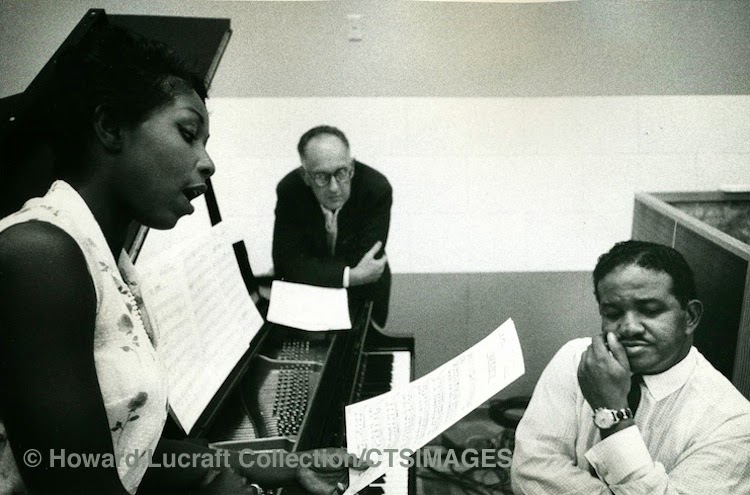 Toni Harper with Eddie Beal at an RCA recording session.

Keith Moore “Red” Mitchell was born in New York City on September 20, 1927.  His first musical instruments were piano and alto saxophone.  During his military service in Germany he switched to acoustic double bass.  After his discharge from the Army he played bass with Jackie Paris and Mundell Lowe.  Gigging around New York included stints with Tony Fruscella and Joe Roland in 1948.  He played piano with Chubby Jackson during a gig at New York’s Bop City in 1949, and recorded with Charlie Ventura the same year.  Mitchell was with Woody Herman from early 1949 to late 1951.  New York sessions in 1952 found Mitchell with Gil Melle, Helen Merrill  and Tony Fruscella.  Mitchell was also active on the west coast in 1952 and recorded with Jimmy Dorsey, Gerry Mulligan, Chet Baker, Russ Freeman and Red Norvo. Mitchell joined Red Norvo for a European tour in 1954 with Buddy DeFranco, Billie Holiday, Beryl Booker, Sonny Clark, Bobby White, and Leonard Feather.   The European tour offered numerous opportunities to record in Sweden, Switzerland, Germany, France and Belgium where he teamed with leading musicians in those countries as well as his tour mates.  He played bass in Gerry Mulligan’s new quartet with Bob Brookmeyer in Paris.  Upon settling back in the states Mitchell recorded with Mulligan, John Graas, Jimmy Rowles, Bobby Troup, Chet Baker, Milt Bernhart, Barney Kessel, Andre Previn, Herb Geller, Jackie & Roy, Hampton Hawes, Bud Shank & Bill Perkins, and Tal Farlow.  Red Mitchell recorded his first albums as leader for Bethlehem in 1955. 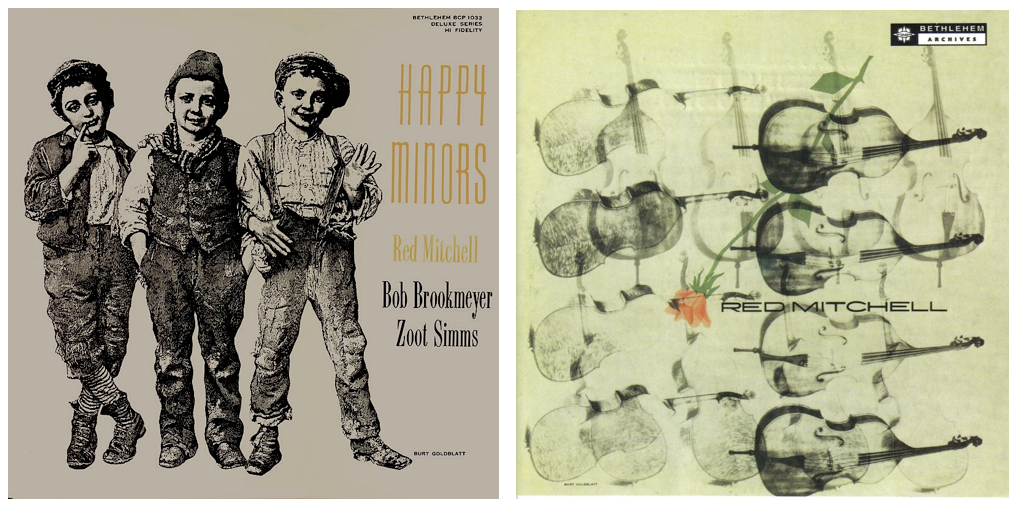 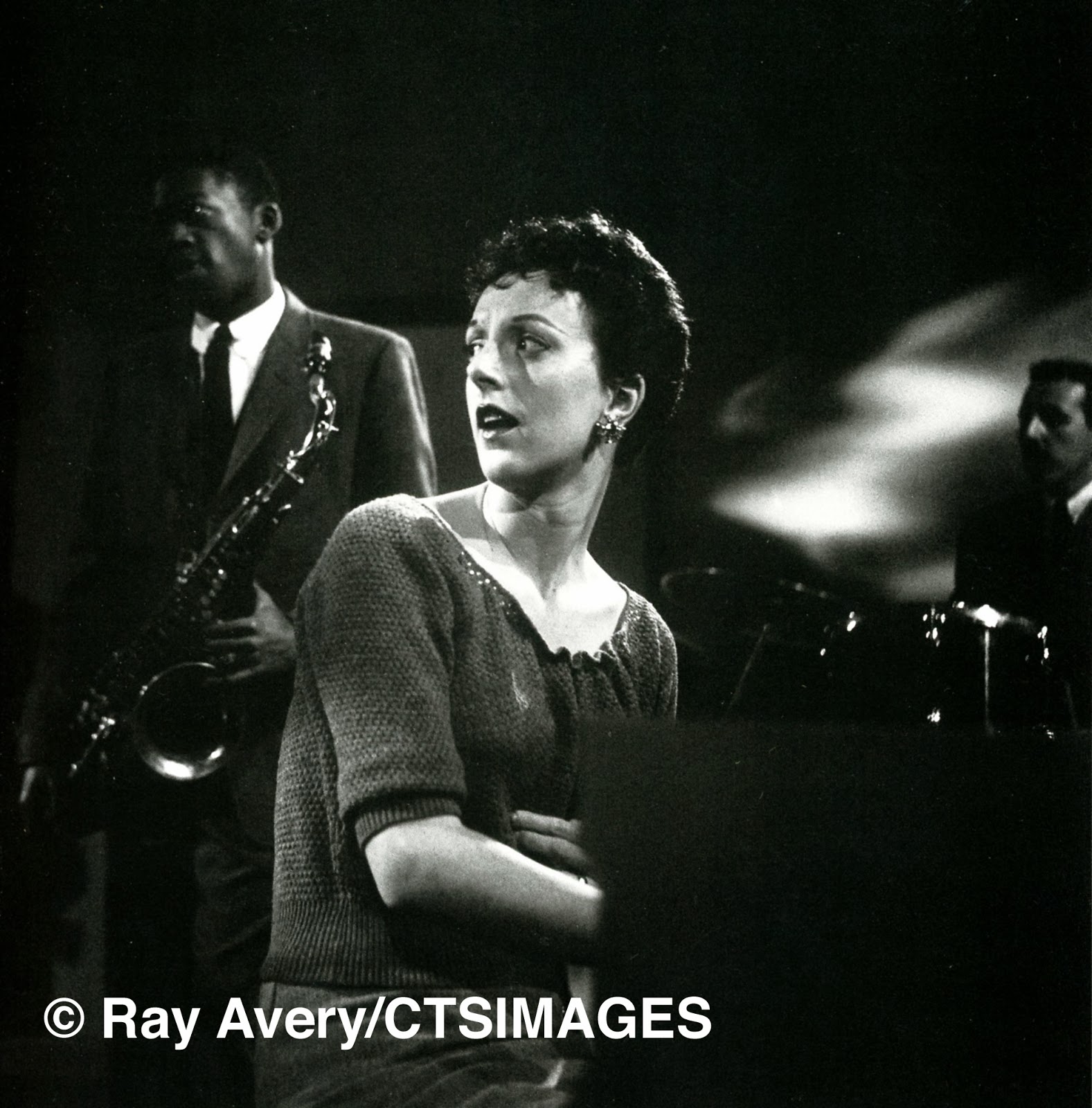 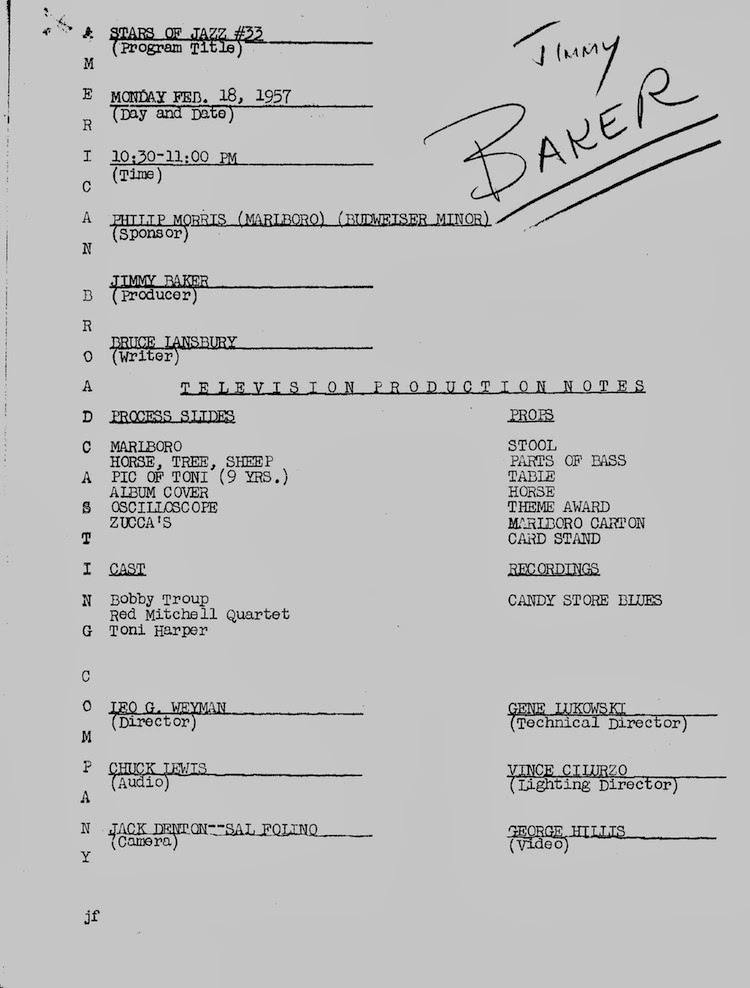 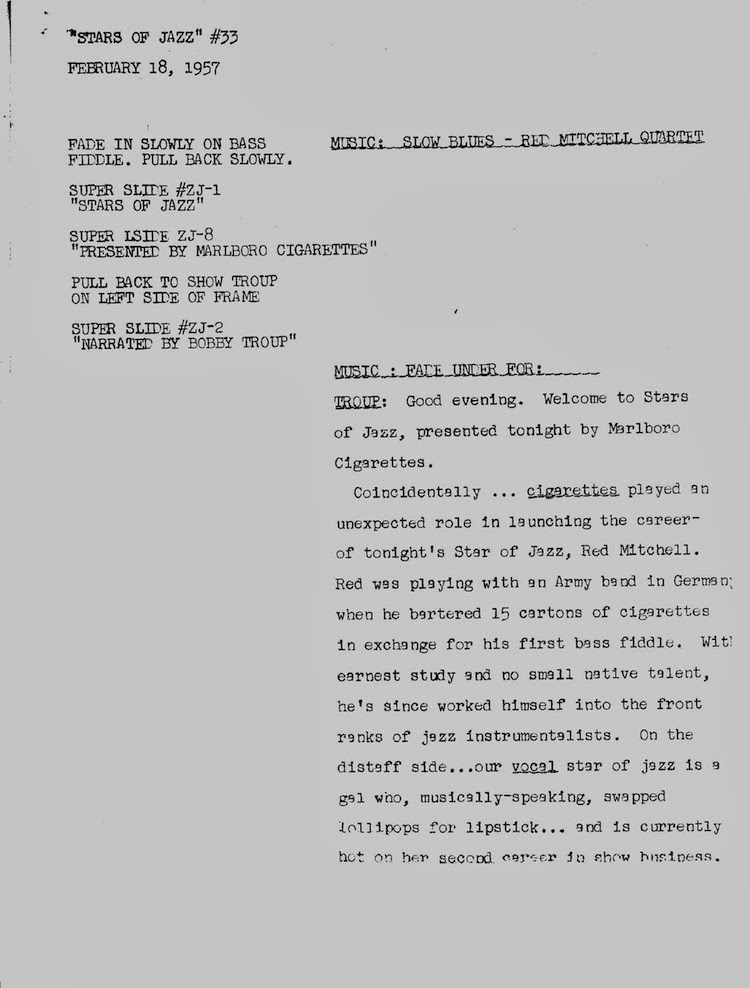 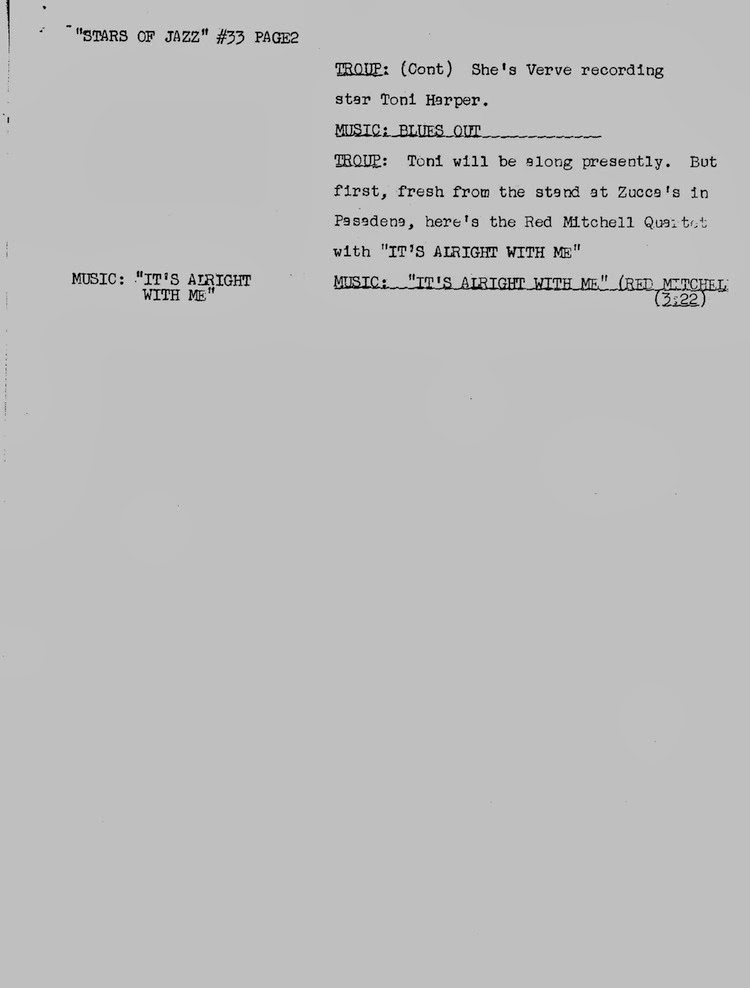 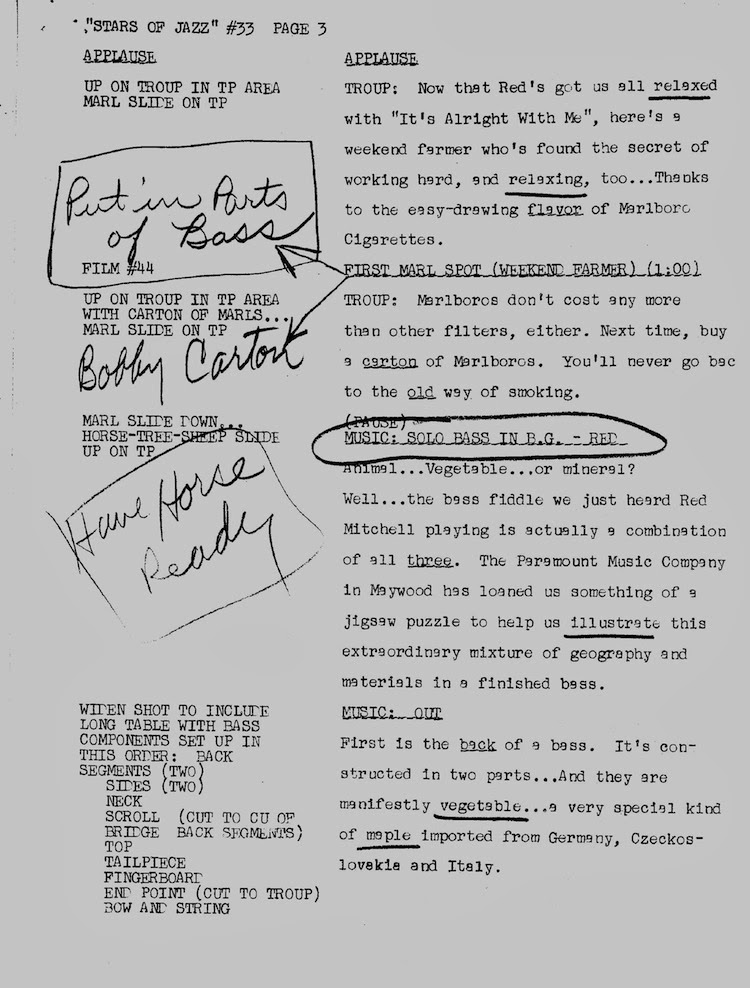 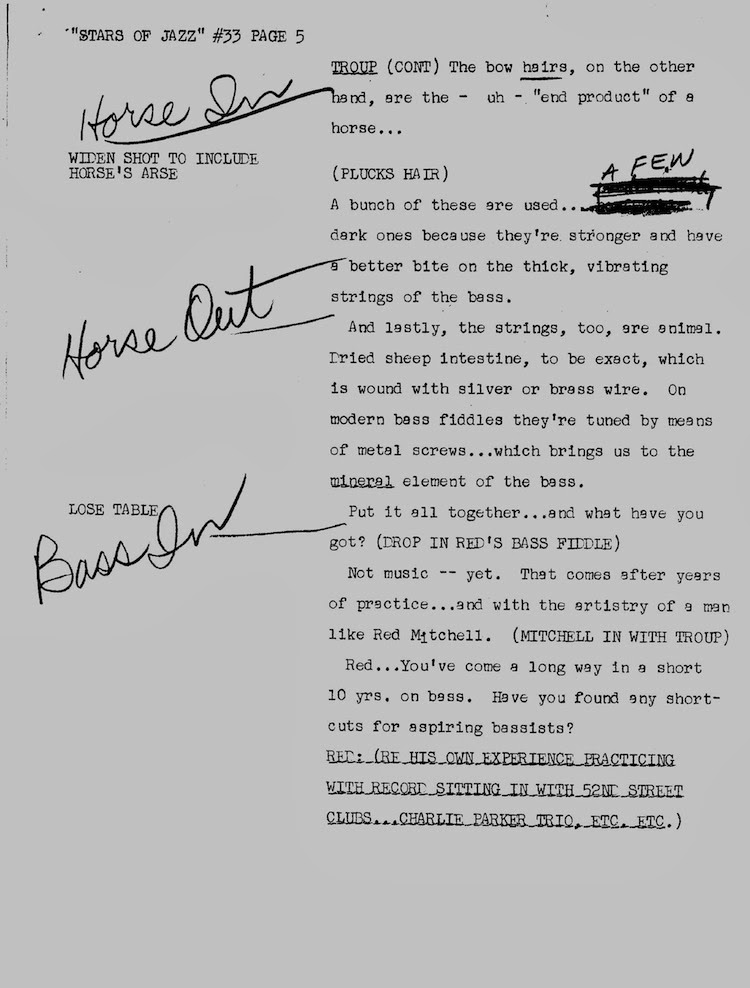 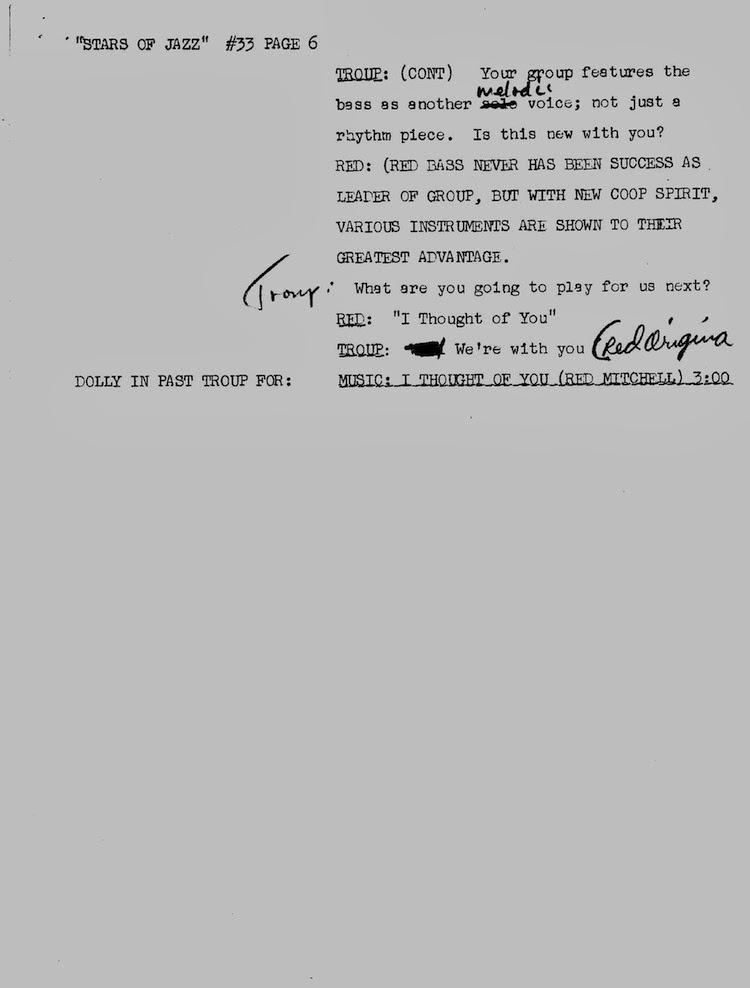 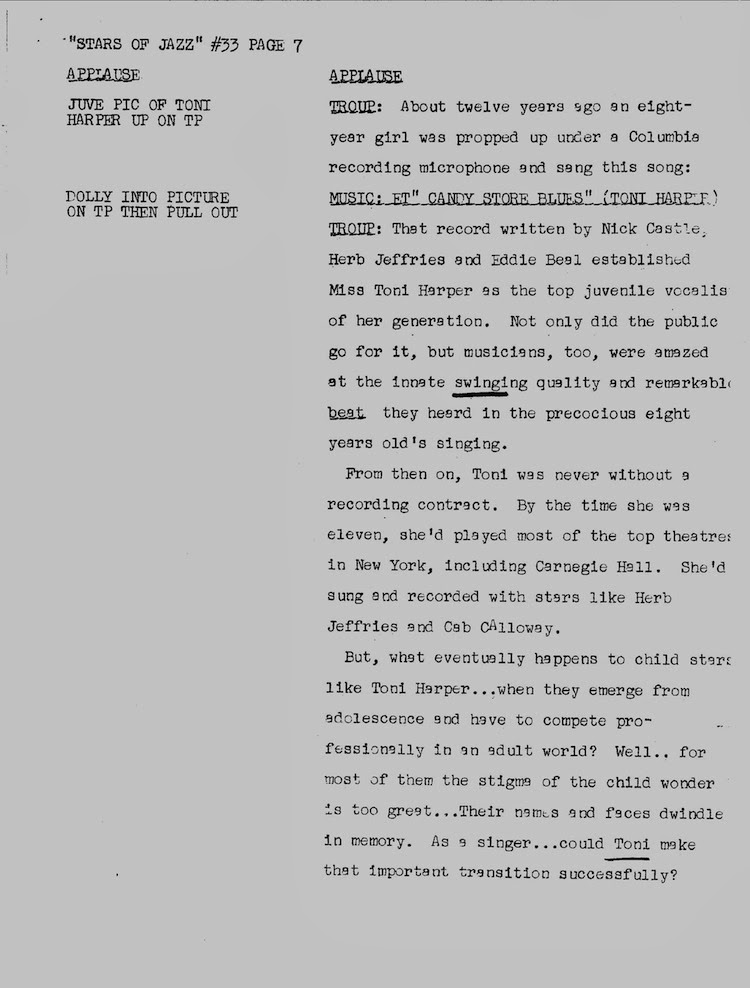 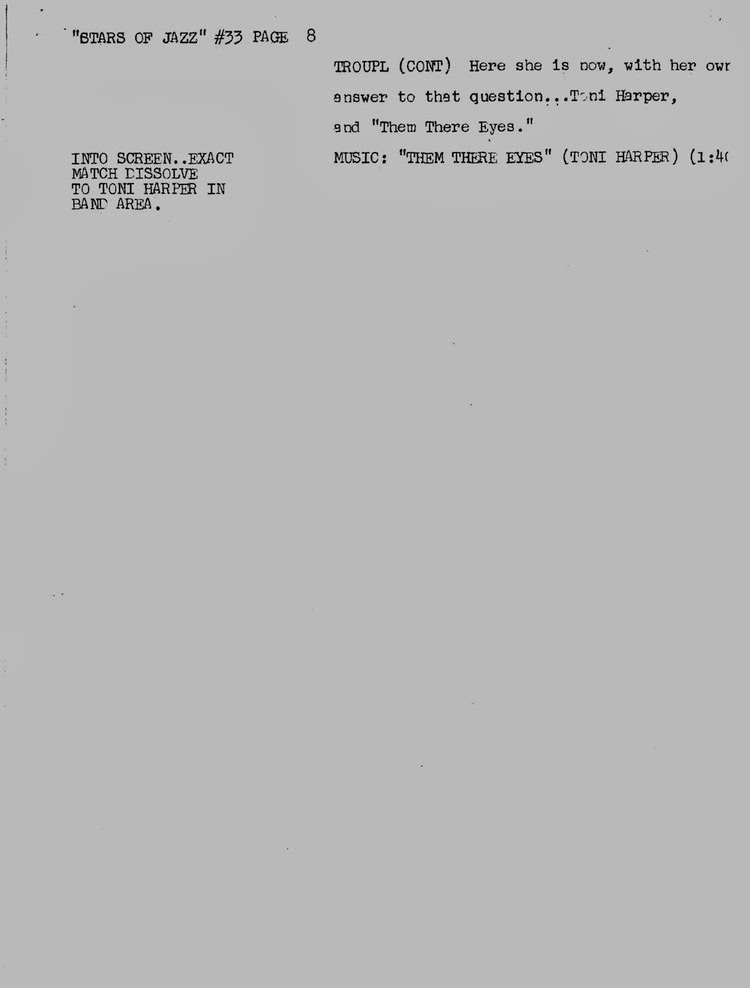 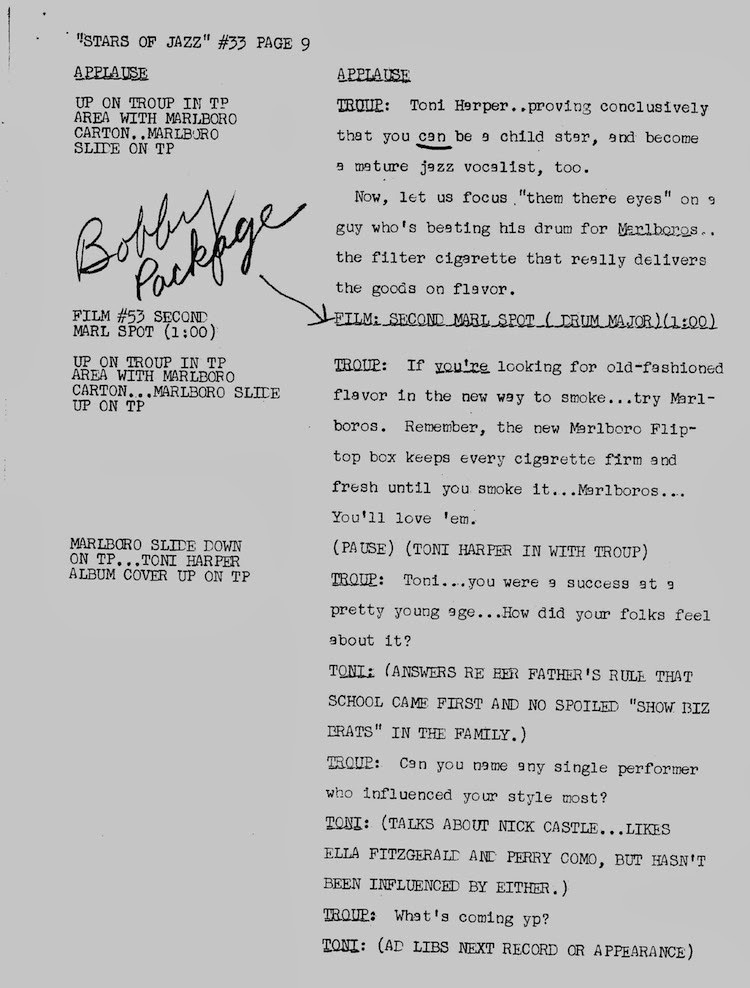 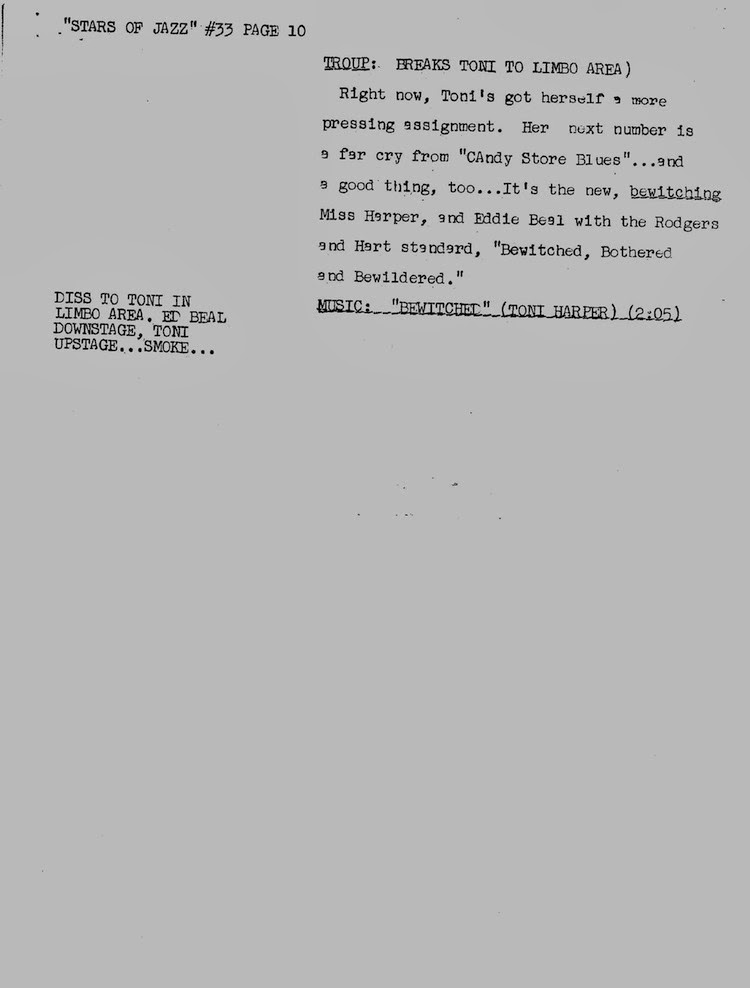 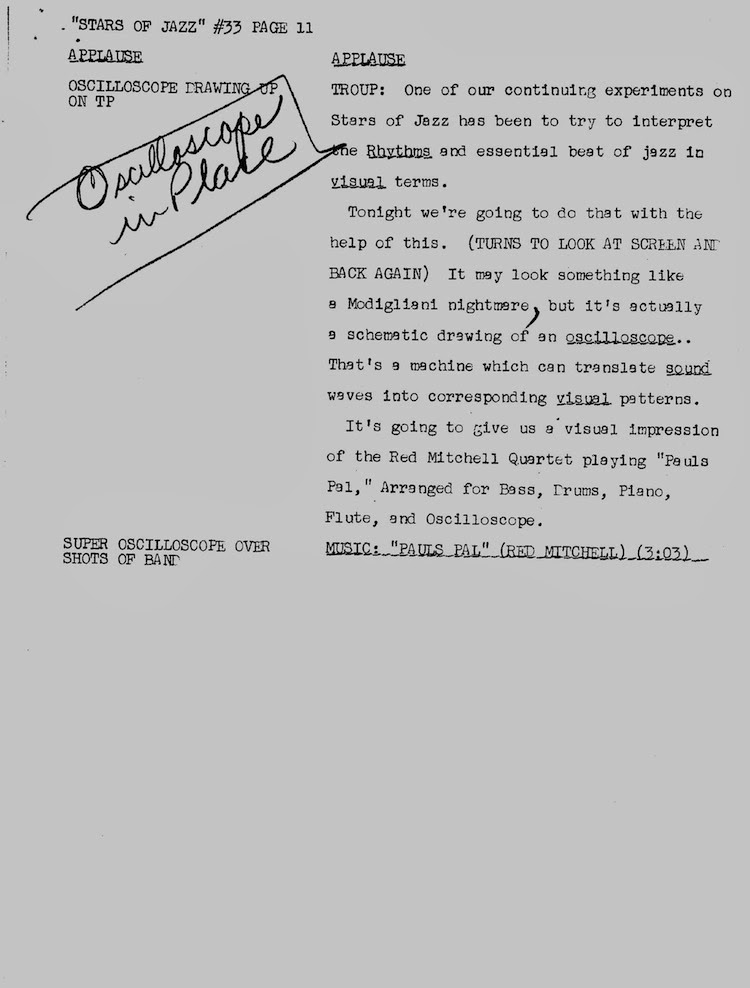 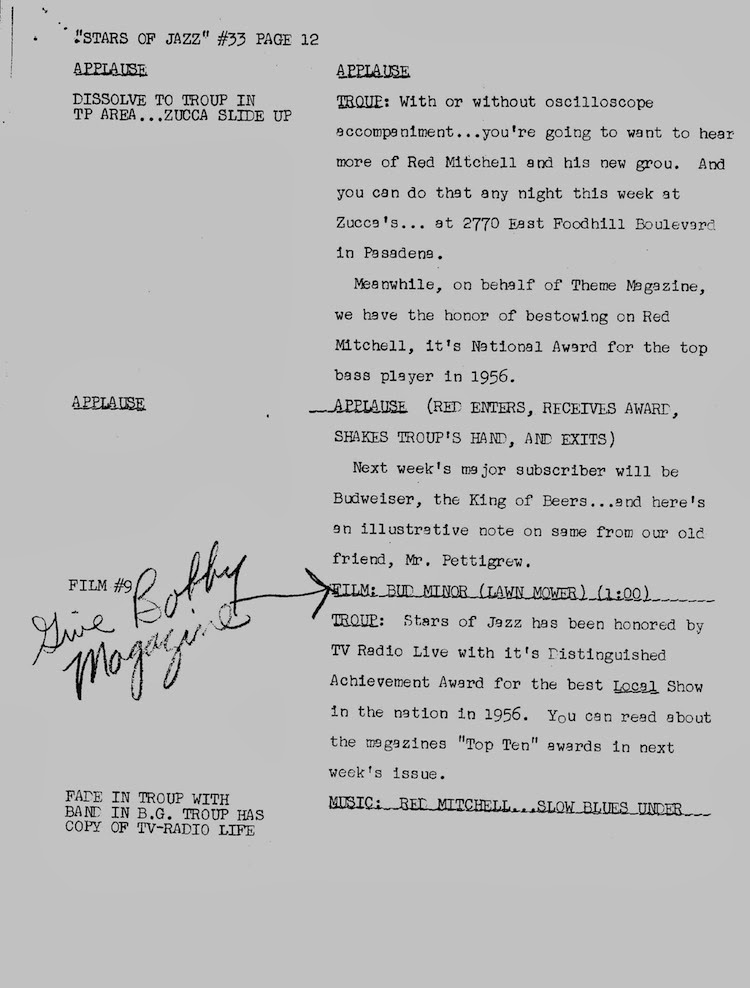 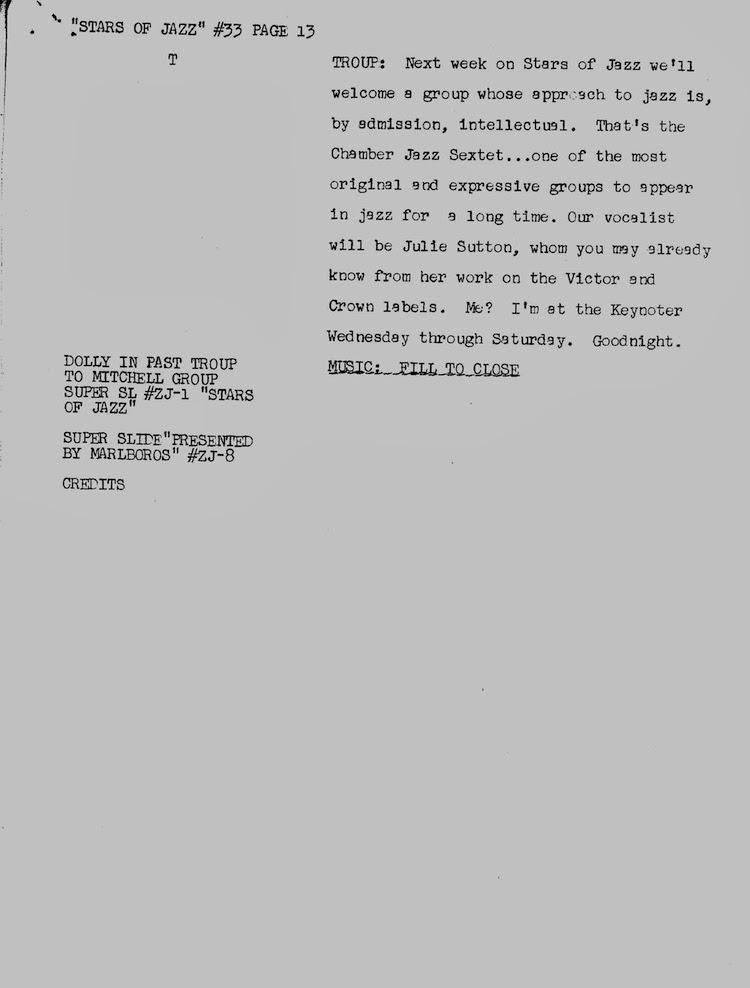