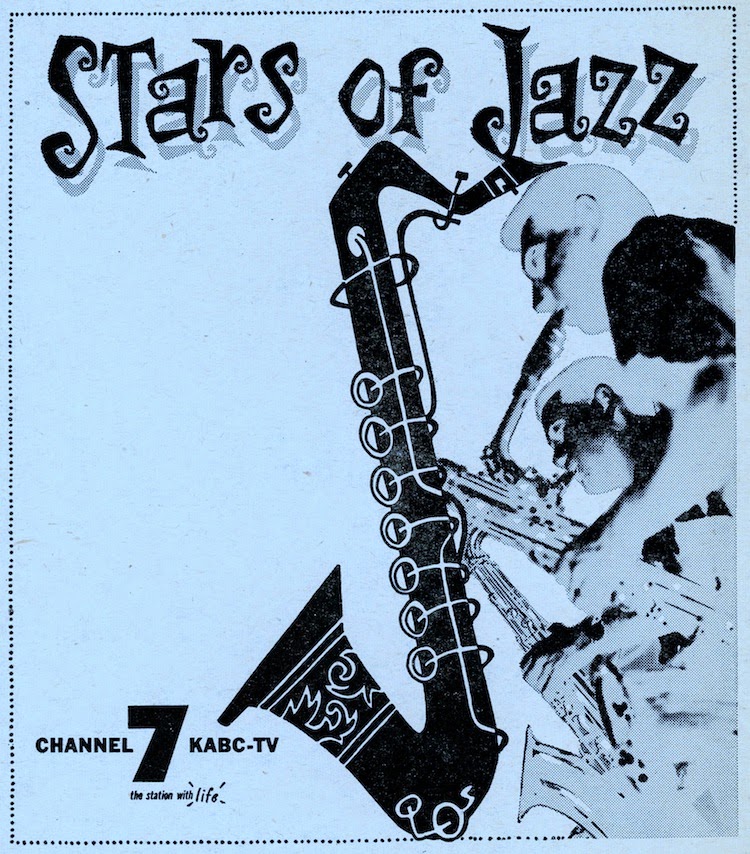 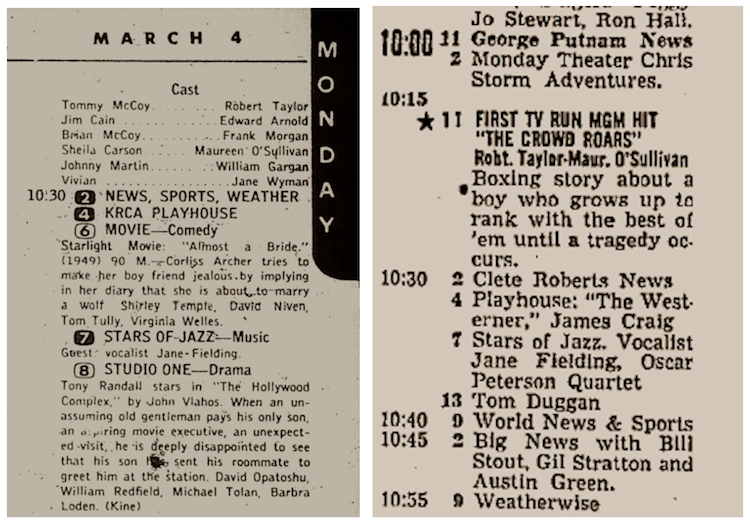 The TV Guide listing for March 4, 1957, noted that jazz vocalist Jane Fielding was to be featured, but neglected to mention that the Oscar Peterson Trio would be appearing on channel 7, STARS OF JAZZ, that evening as well. Fortunately the Los Angeles Times television listings did note that Oscar Peterson was scheduled to appear, but stated in error that he would be in a quartet setting, not the working trio with Herb Ellis on guitar and Ray Brown on bass.  Oscar Peterson’s trio had followed Dizzy Gillespie’s big band into Peacock Lane on February 22, 1957.

Oscar Peterson was born August 15, 1925, in Montreal, Quebec, Canada. His parents were immigrants from the British West Indies and Virgin Islands. His father, Daniel Peterson, was boatswain on a merchant ship when he met Olivia John in Montreal, where she worked as a cook and housekeeper for an English family. Daniel gave up the sailing work and began working as a porter for the Canadian Pacific Railway. He and Olivia married and stayed in Montreal as their family grew.

Oscar was the fourth of five children. Their father insisted that they all learn a musical instrument, and Oscar began to study the trumpet. A childhood bout of tuberculosis forced a fortuitous switch to the piano, under the tutelage of his father and his older sister, Daisy. It soon became apparent that Oscar’s talent surpassed the capabilities of home teaching, and he was sent first to teacher Lou Hooper and then to the gifted Hungarian classical pianist, Paul deMarky. A warm and respectful musical friendship developed between the two, and with Mr. deMarky’s guidance Oscar’s mastery of the instrument grew, along with his dedication to and command of his talent. 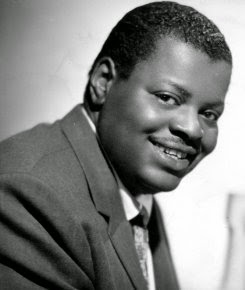 The performance career of Oscar Peterson began while he was still a young teenager in high school, as pianist with the Johnny Holmes Orchestra in Montreal. After a few years with the Orchestra, he formed his own trio, the first in a format he maintained throughout his lifelong career. With the trio, he quickly gained fame and popularity throughout Canada. His appearances at the Alberta Lounge in Montreal were broadcast live on the radio. In 1949 impresario Norman Granz heard one of those broadcasts, went to the Alberta Lounge and enticed Mr. Peterson into making a surprise guest appearance with Granz’ all-star “Jazz at the Philharmonic” at Carnegie Hall later that year. 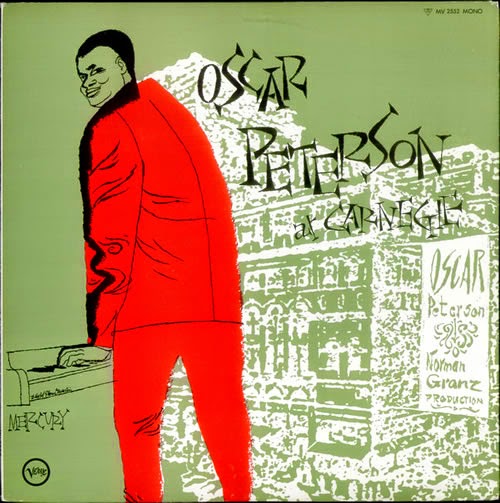 Leaving the audience awestruck, Oscar joined JATP in 1950 as a full-time touring member. He formed a piano-bass duo with Ray Brown as well, and began recording for Granz at the same time. He also added Barney Kessel as the first of the guitarists with whom he would create trios, returning to the group format he loved. 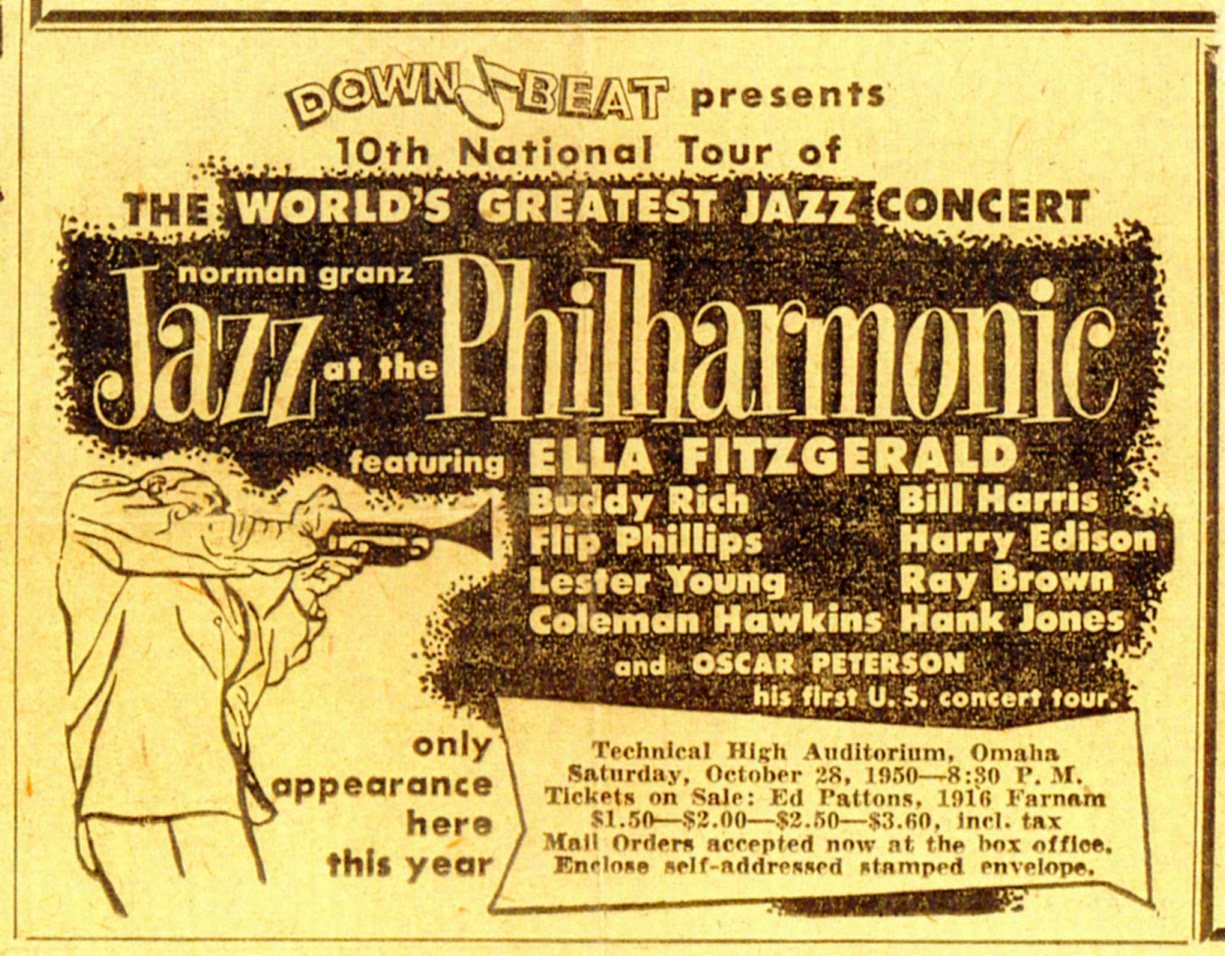 He was voted Jazz Pianist of the Year in 1950 by the Downbeat Readers’ Poll, a title he garnered for an additional twelve years. He toured the globe extensively with Jazz at the Philharmonic as well as with his own trio. 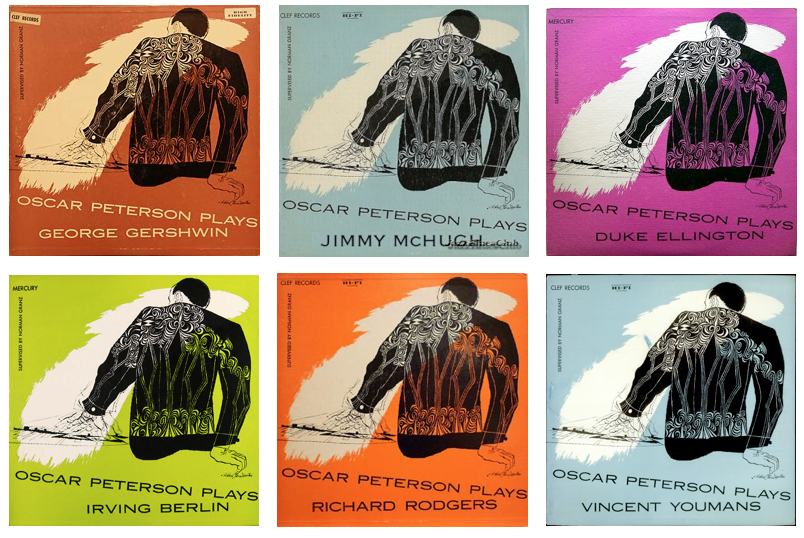 Norman Granz had packaged many of Peterson’s recordings into a series of LPs highlighting composers such as George Gershwin, Jimmy McHugh, Duke Ellington, Irving Berlin, Richard Rodgers, and Vincent Youmans. 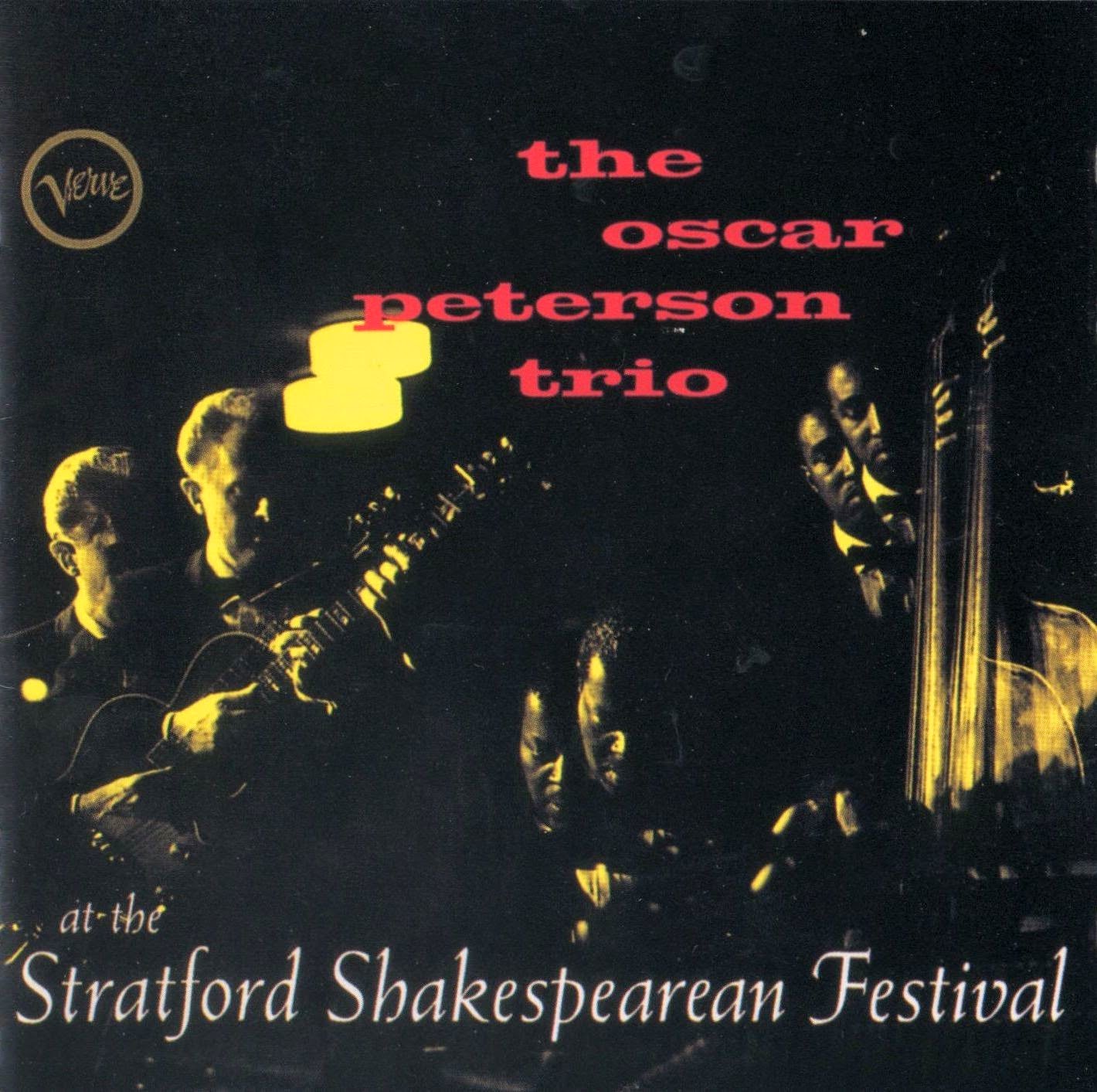 One one the Peterson trio’s recent albums featuring Ellis and Brown was recorded at the Stratford Shakespearean Festival.  It would become a best selling album on Granz’s Verve label.

Jane Fielding took up ice skating as a teen and a promising career was cut short by an ankle injury. After high school she took up modeling and worked briefly for Slenderella before discovering her professional singing voice. Fielding was singing at a jam session in a Miami nightclub when she was heard by Ted Efantis, a Washington, D.C. based musician who was visiting his sister, Del Adams, also a vocalist. Efantis invited Fielding to Washington after he returned and her vocal career blossomed in the many clubs in D.C. Jane sang in front of Efantis’ quintet at the Club Caverns with Ted Efantis on tenor saxophone, Rob Swope on trombone, Wilbur Little on bass, Gene Bonike on piano and Ray Richardson on drums. Jane also sang with Joe Theimer’s band before moving to the west coast with her family.  Jane’s father worked in the aircraft industry and had accepted a position in Los Angeles. After settling with her family in Topanga Canyon, Jane checked out the nightclub scene in Hollywood and Beverly Hills where she was heard by William Claxton and then introduced to Herb Kimmel. 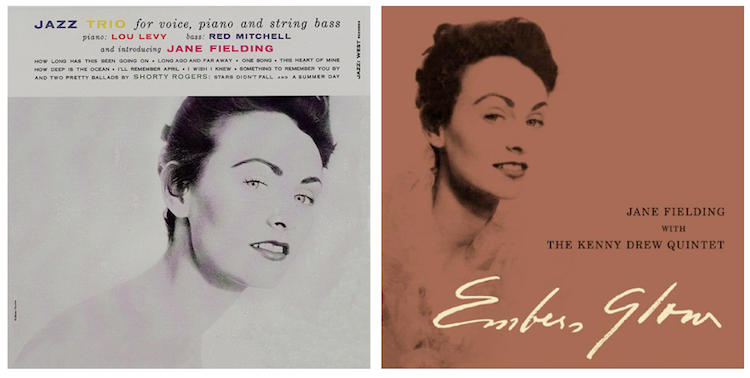 Jane’s first album for Kimmel’s jazz:west label was under the leadership of Red Mitchell with Lou Levy on piano. Her next album for jazz:west paired her with a quintet led by Kenny Drew. 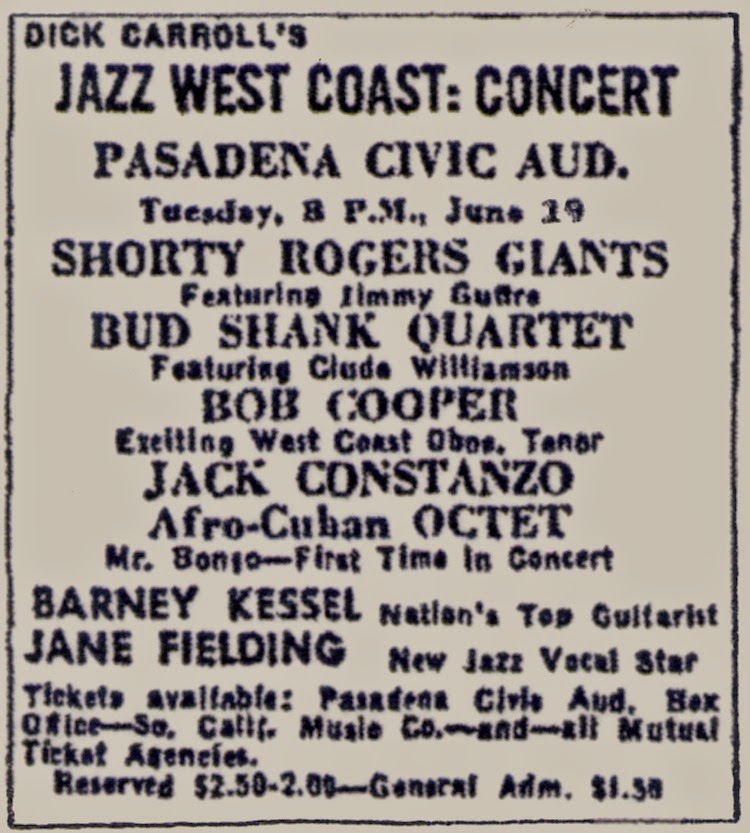 Prior to her appearance on Stars of Jazz, Jane Fielding was featured in a concert at the Pasadena Civic Auditorium on June 19, 1956, where other artists included Shorty Rogers Giants with Jimmy Giuffre, the Bud Shank Quartet with Claude Williamson, Bob Cooper playing tenor and oboe, Jack Costanzo’s Afro-Cuban Octet, and Barney Kessel. 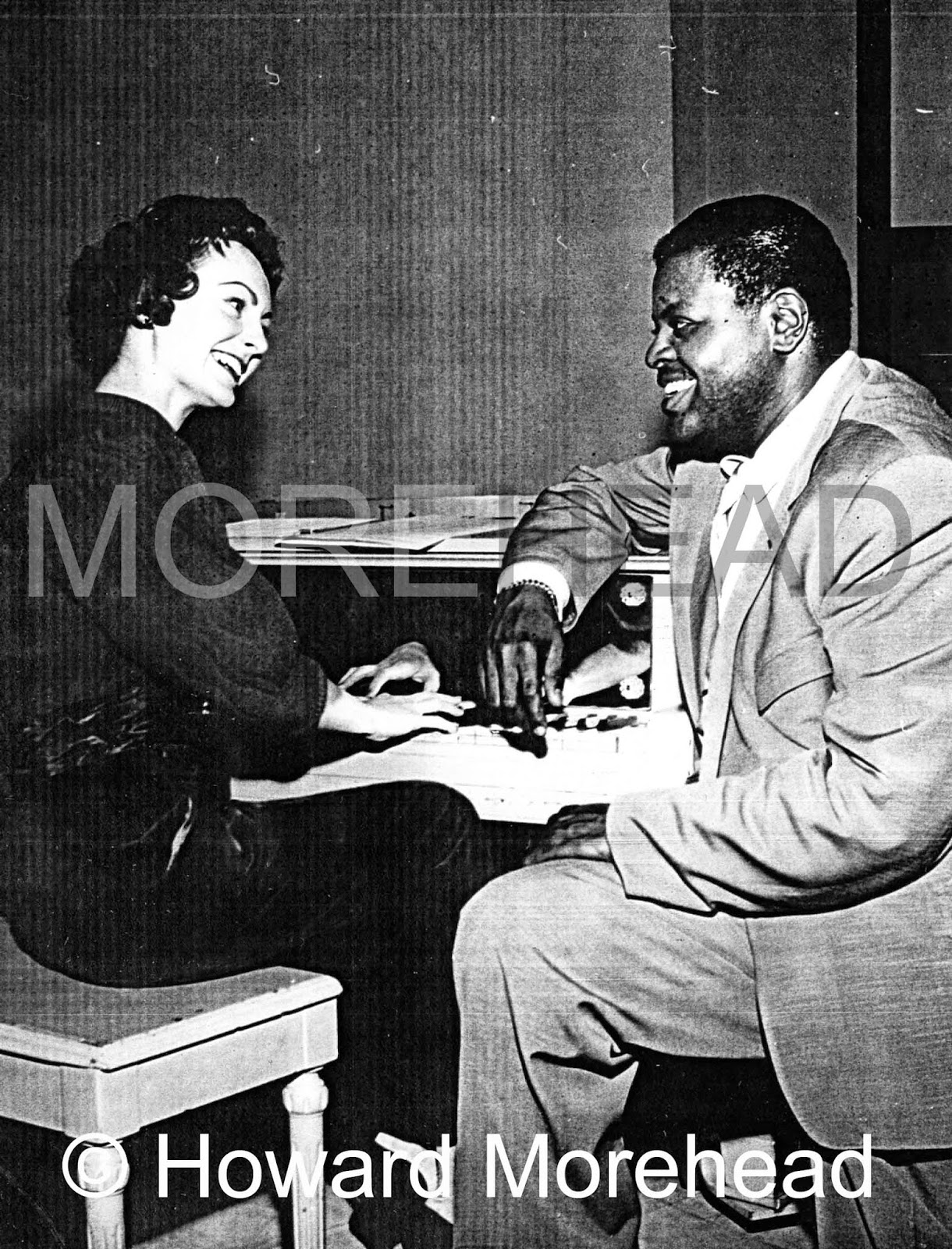 Jane and Oscar relaxing during the rehearsal, photo @ Howard Morehead 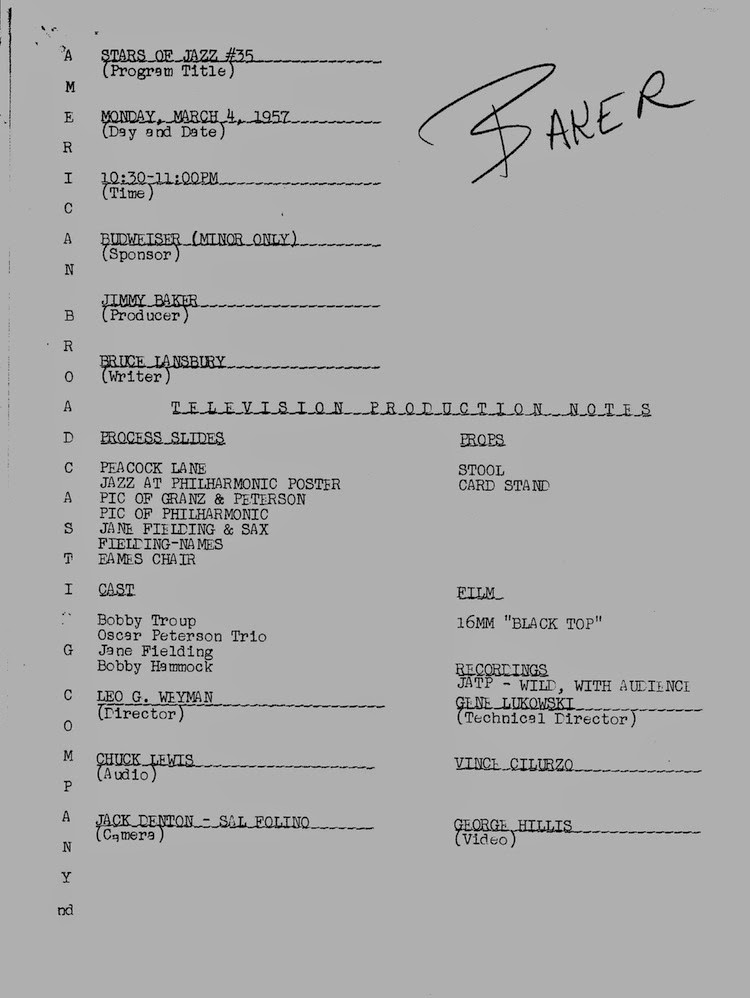 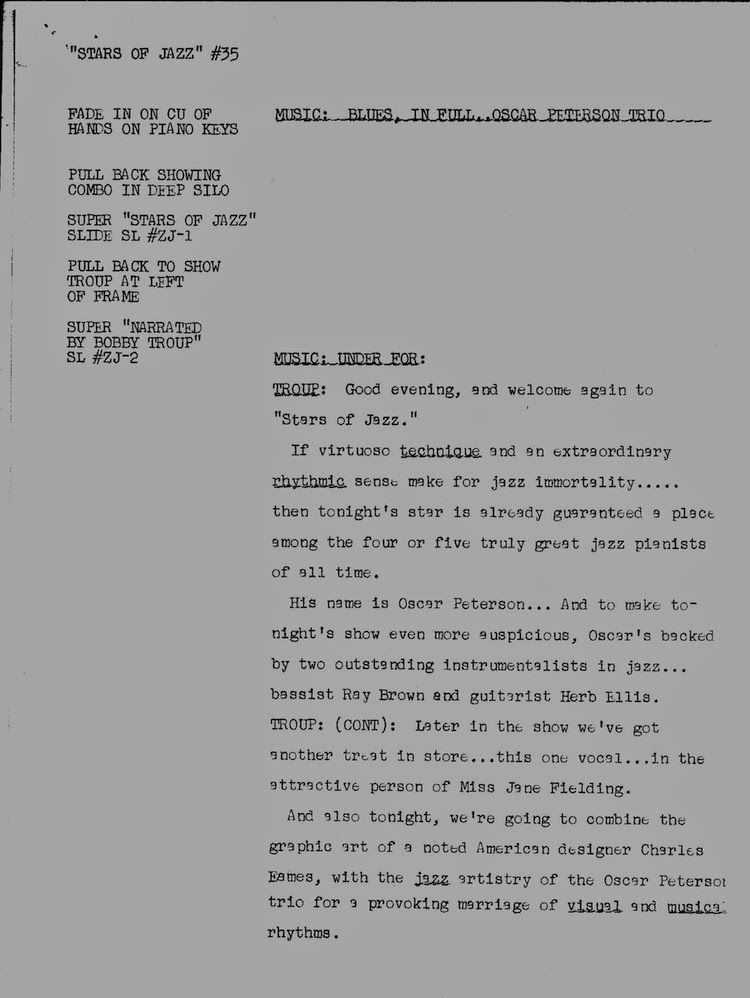 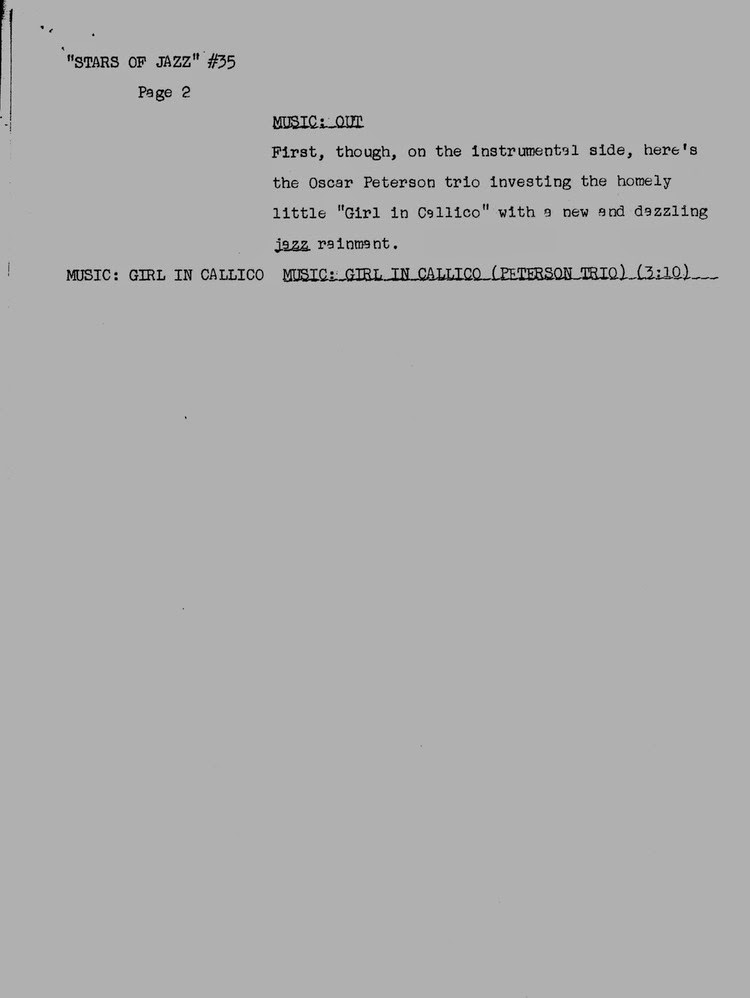 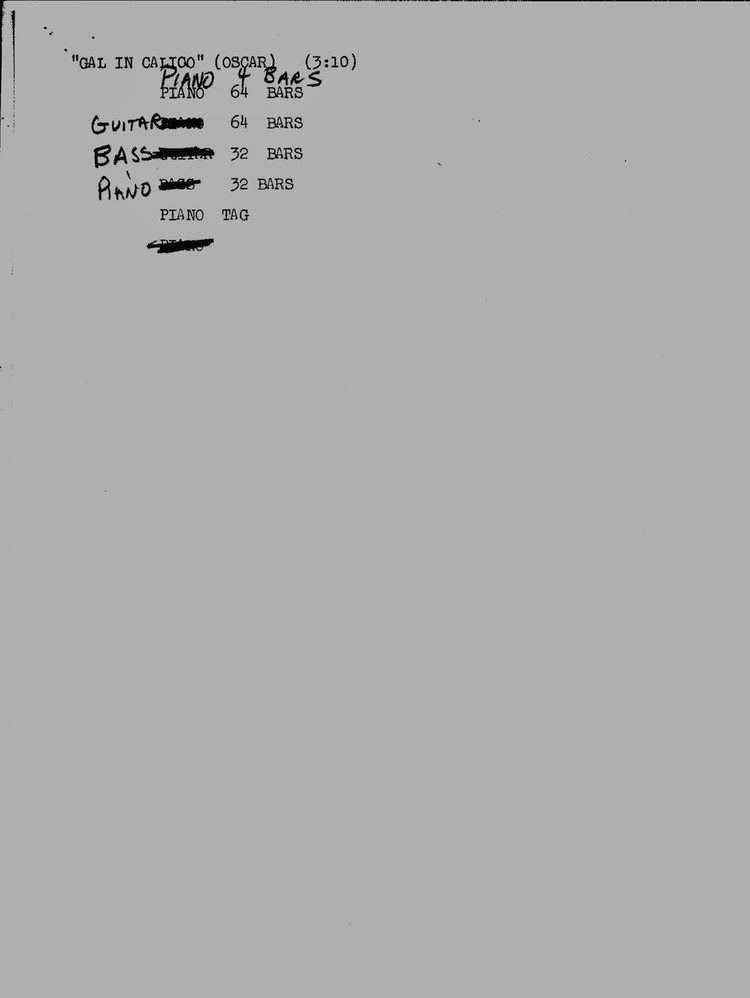 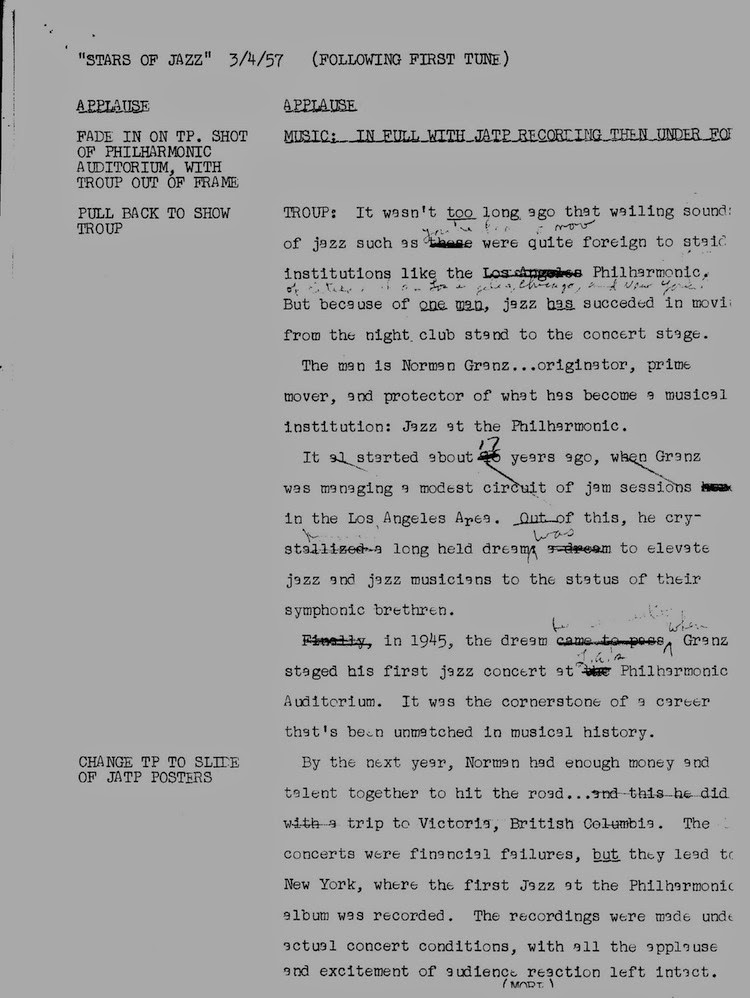 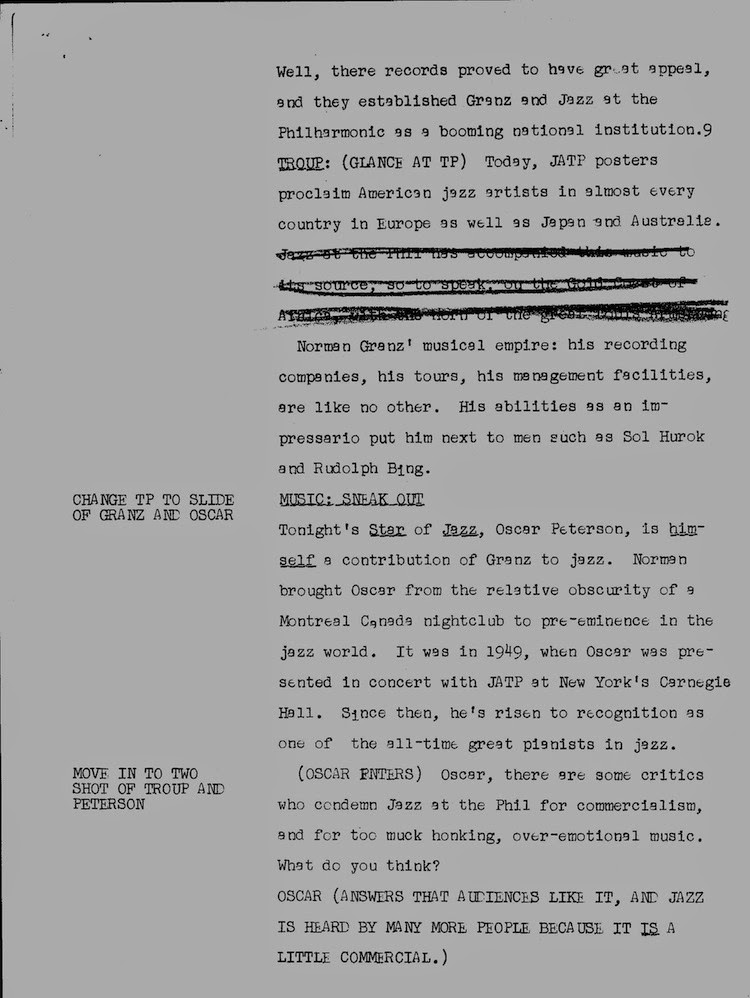 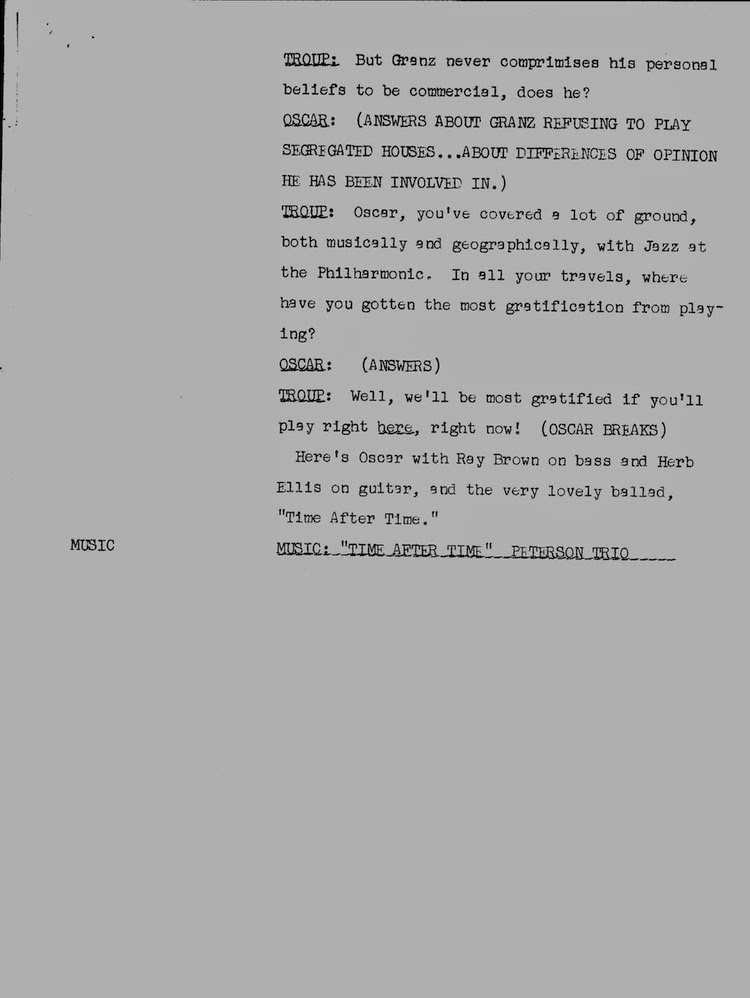 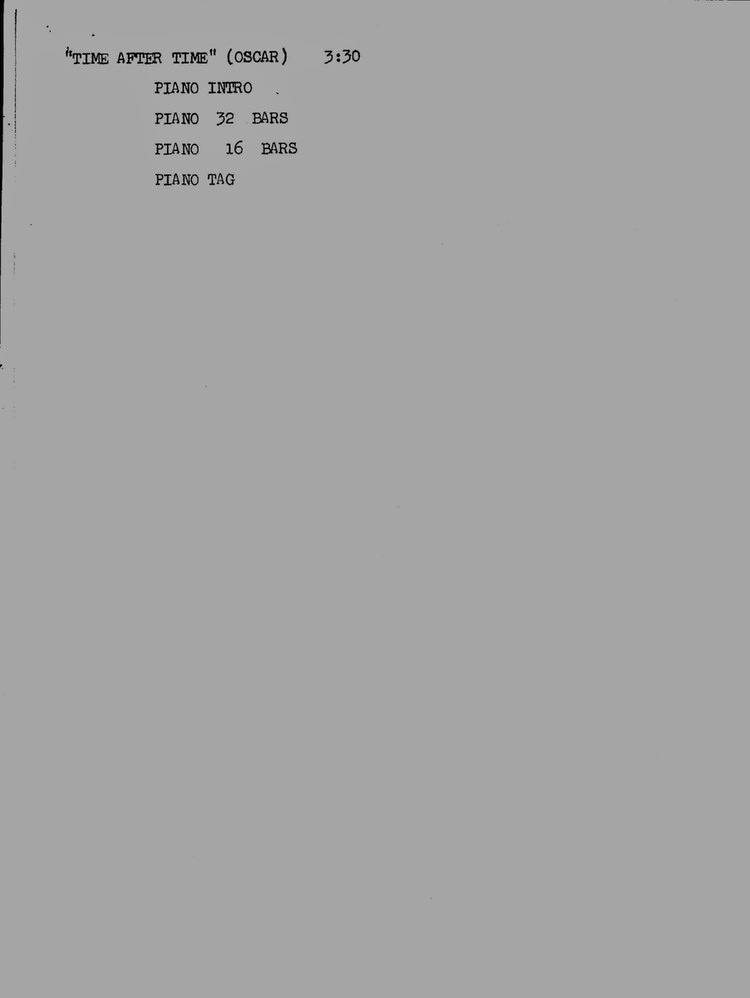 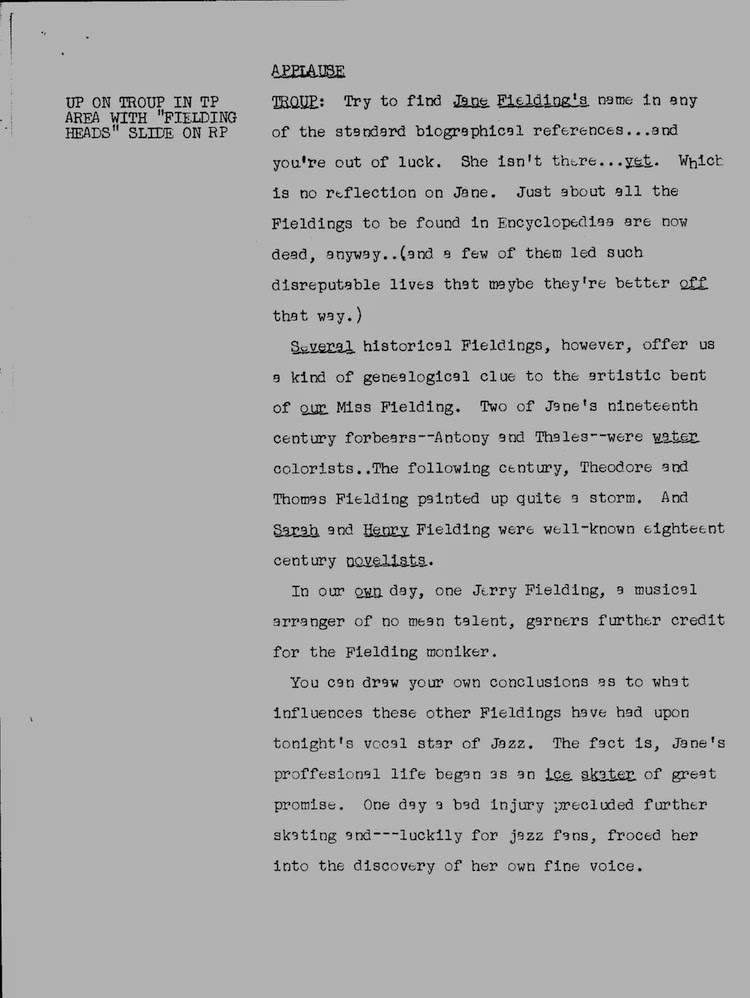 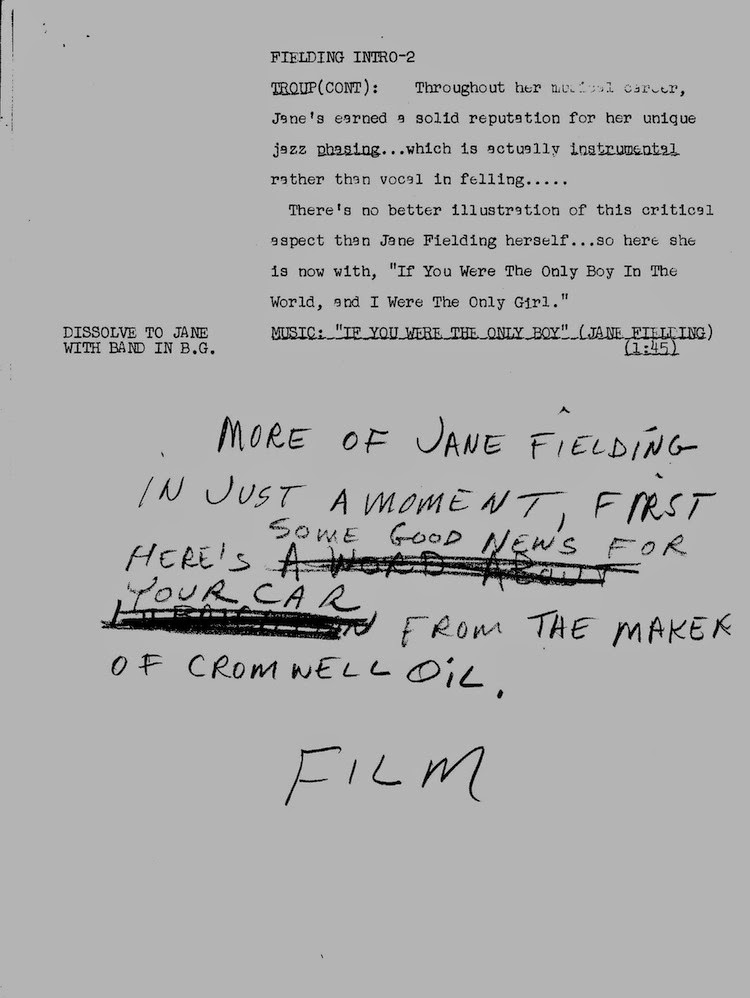 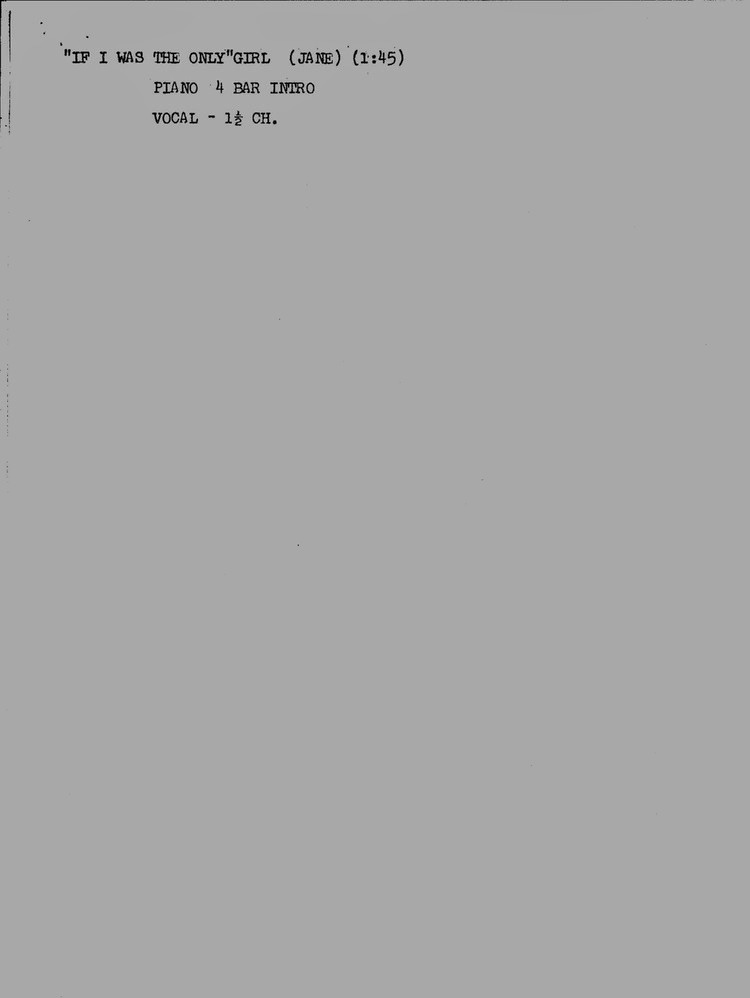 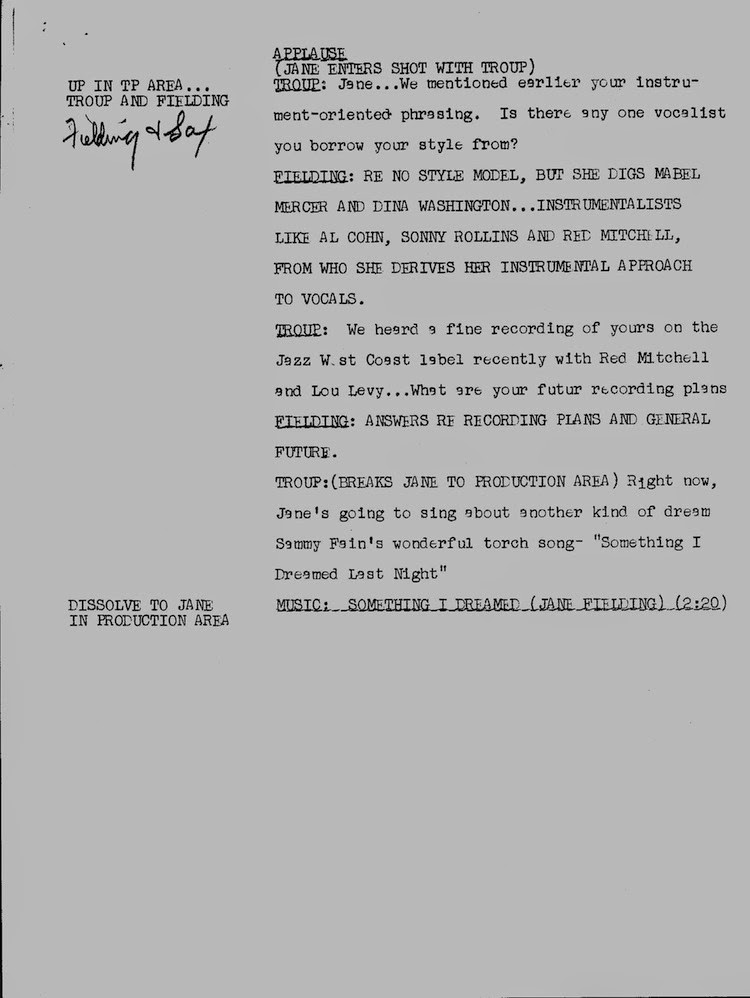 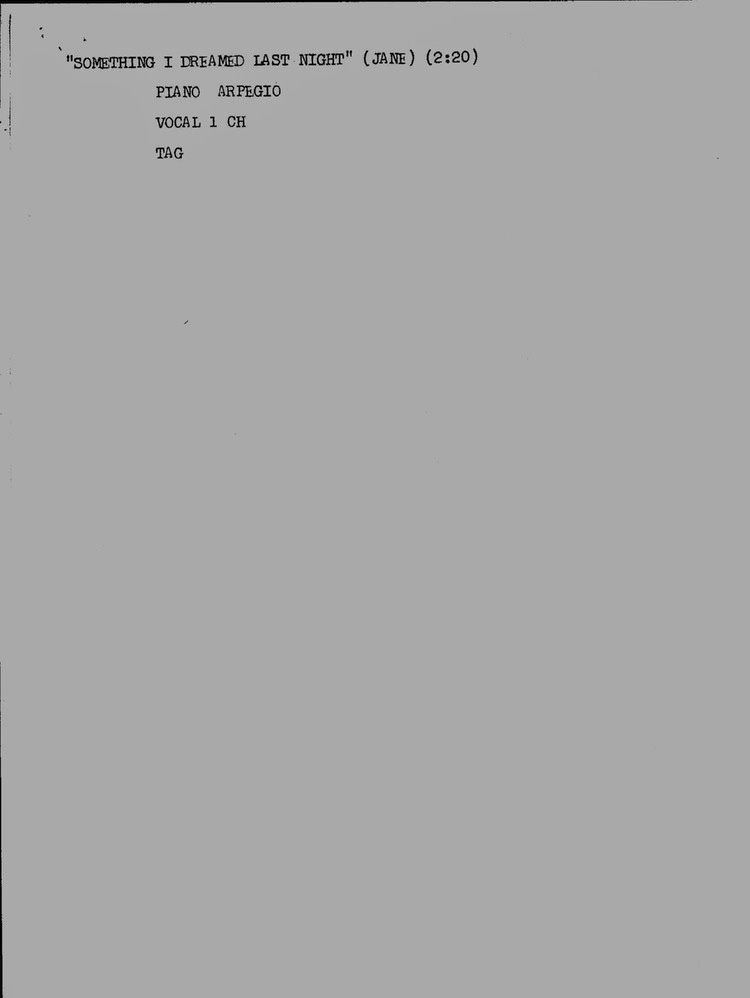 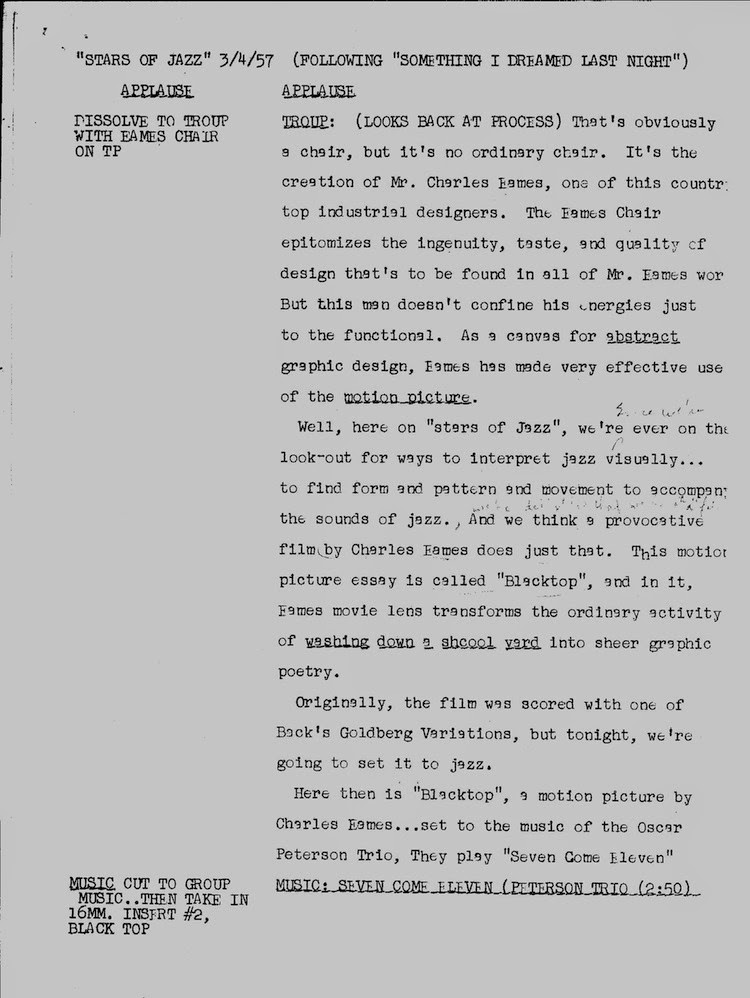 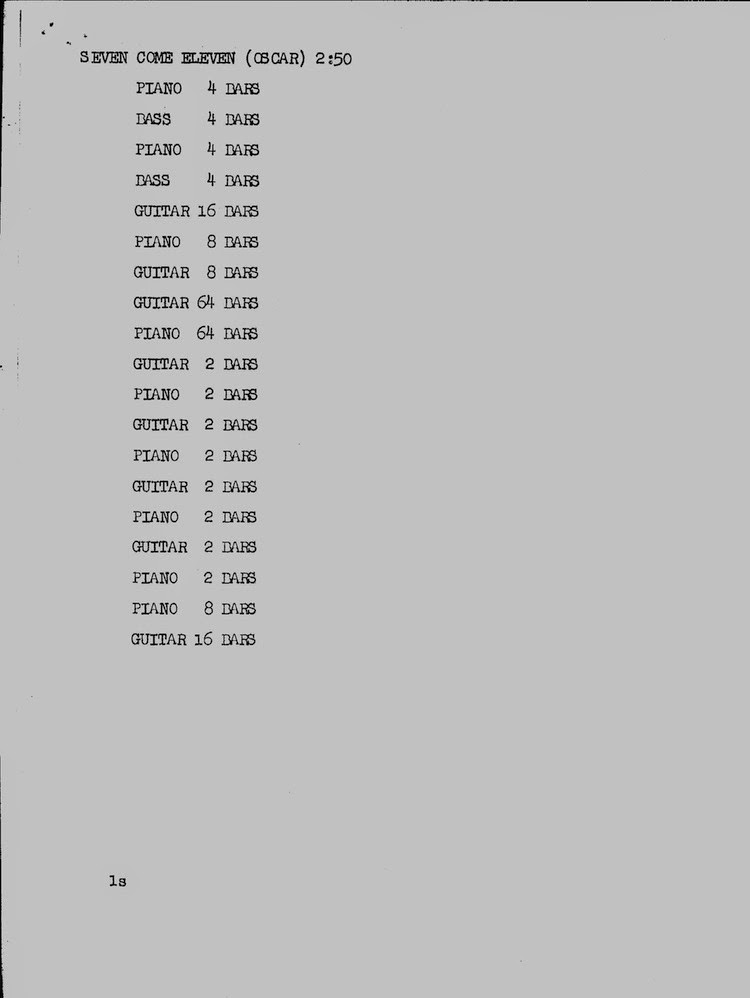 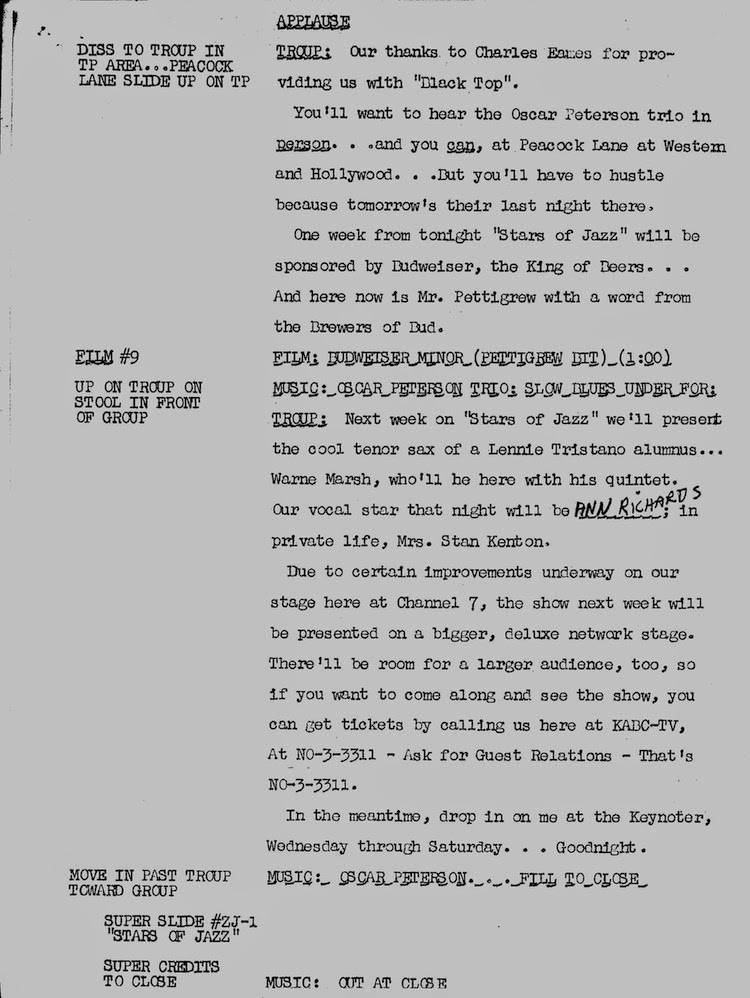